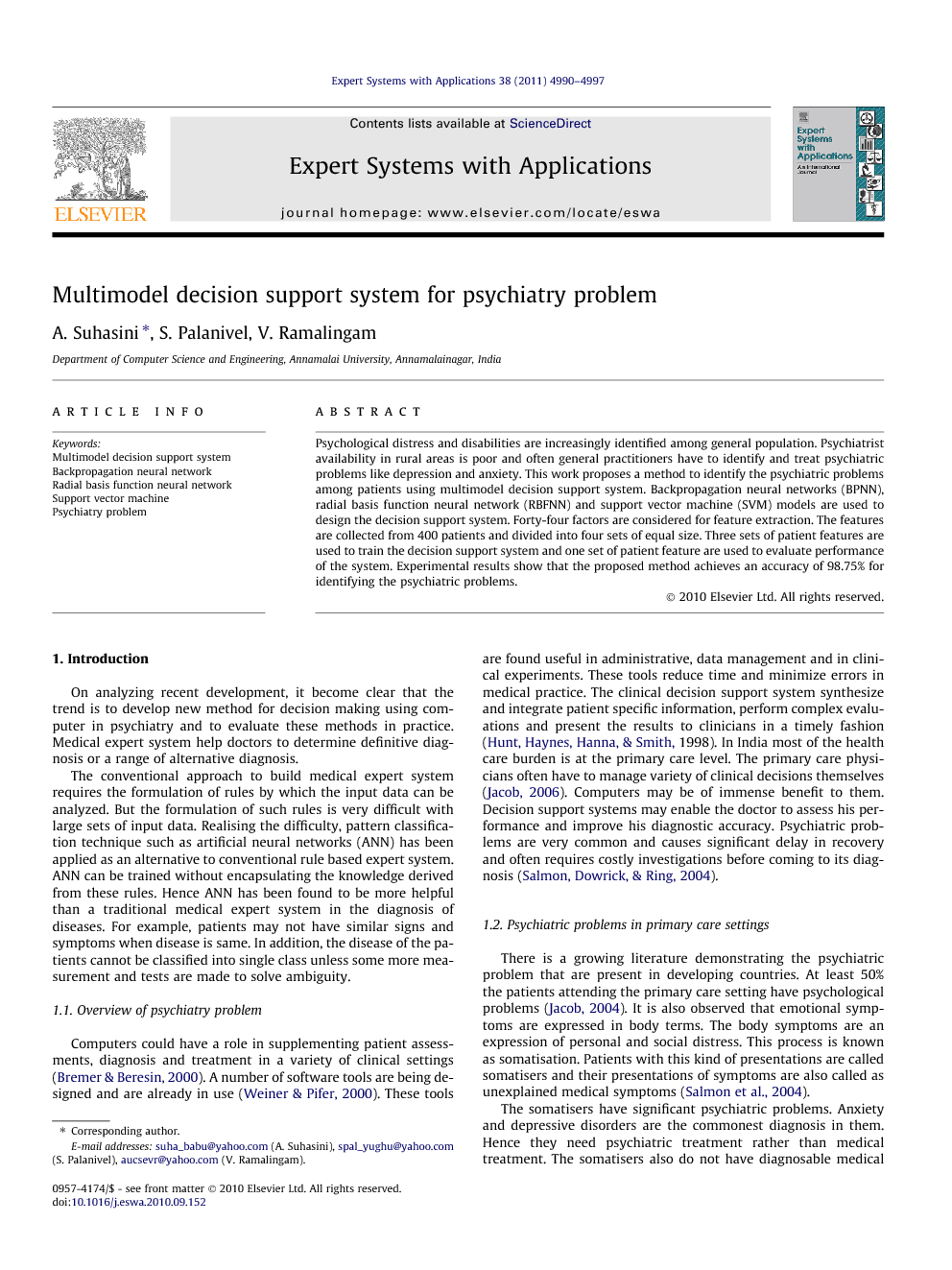 Psychological distress and disabilities are increasingly identified among general population. Psychiatrist availability in rural areas is poor and often general practitioners have to identify and treat psychiatric problems like depression and anxiety. This work proposes a method to identify the psychiatric problems among patients using multimodel decision support system. Backpropagation neural networks (BPNN), radial basis function neural network (RBFNN) and support vector machine (SVM) models are used to design the decision support system. Forty-four factors are considered for feature extraction. The features are collected from 400 patients and divided into four sets of equal size. Three sets of patient features are used to train the decision support system and one set of patient feature are used to evaluate performance of the system. Experimental results show that the proposed method achieves an accuracy of 98.75% for identifying the psychiatric problems.

On analyzing recent development, it become clear that the trend is to develop new method for decision making using computer in psychiatry and to evaluate these methods in practice. Medical expert system help doctors to determine definitive diagnosis or a range of alternative diagnosis. The conventional approach to build medical expert system requires the formulation of rules by which the input data can be analyzed. But the formulation of such rules is very difficult with large sets of input data. Realising the difficulty, pattern classification technique such as artificial neural networks (ANN) has been applied as an alternative to conventional rule based expert system. ANN can be trained without encapsulating the knowledge derived from these rules. Hence ANN has been found to be more helpful than a traditional medical expert system in the diagnosis of diseases. For example, patients may not have similar signs and symptoms when disease is same. In addition, the disease of the patients cannot be classified into single class unless some more measurement and tests are made to solve ambiguity. 1.1. Overview of psychiatry problem Computers could have a role in supplementing patient assessments, diagnosis and treatment in a variety of clinical settings (Bremer & Beresin, 2000). A number of software tools are being designed and are already in use (Weiner & Pifer, 2000). These tools are found useful in administrative, data management and in clinical experiments. These tools reduce time and minimize errors in medical practice. The clinical decision support system synthesize and integrate patient specific information, perform complex evaluations and present the results to clinicians in a timely fashion (Hunt, Haynes, Hanna, & Smith, 1998). In India most of the health care burden is at the primary care level. The primary care physicians often have to manage variety of clinical decisions themselves (Jacob, 2006). Computers may be of immense benefit to them. Decision support systems may enable the doctor to assess his performance and improve his diagnostic accuracy. Psychiatric problems are very common and causes significant delay in recovery and often requires costly investigations before coming to its diagnosis (Salmon, Dowrick, & Ring, 2004). 1.2. Psychiatric problems in primary care settings There is a growing literature demonstrating the psychiatric problem that are present in developing countries. At least 50% the patients attending the primary care setting have psychological problems (Jacob, 2004). It is also observed that emotional symptoms are expressed in body terms. The body symptoms are an expression of personal and social distress. This process is known as somatisation. Patients with this kind of presentations are called somatisers and their presentations of symptoms are also called as unexplained medical symptoms (Salmon et al., 2004). The somatisers have significant psychiatric problems. Anxiety and depressive disorders are the commonest diagnosis in them. Hence they need psychiatric treatment rather than medical treatment. The somatisers also do not have diagnosable medical problem and undergo extensive investigations. This results in loss of time for the doctor and produce huge burden to the health care delivery system (Salmon, Dowrick, & Ring, 2005). Attempts are made to systematically interview them and screen for psychiatric diagnosis. Thereby the patients may be identified earlier and treated by psychiatrists. This approach has led into a predictive model for abnormal illness behaviours and somatisation. Those found to have these problems are screened for depression or anxiety disorders and are treated with psychiatric drugs (Lewis, Pelosi, & Arya, 1992). In most of the countries the primary care settings availability of psychiatrists are rare. For example there are only 3000 psychiatrists for the population of more than 115 crore in India. At the primary care level and at the district level too the problem of poor psychiatric services are common. Therefore physicians and other specialists are made to treat the psychiatric problems. The somatising patients pose a major burden on them. The prevalence of somatisation is considered to be higher than in western countries (Jacob, 2006). In order to help the physicians decision support system may be of immense value. The system should enable the primary care physician to screen for depression or anxiety on the patients whom he suspects mental illness or somatisation or abnormal illness behaviours. Thereby these patients can be identified and treated with drugs or psychotherapy at primary care level or may be referred to psychiatrists. 1.3. Problems faced in clinical decision support systems There are certain general problems in preparing clinical decision support systems (CDSS). It is not possible to create CDSS because there is no electronic medical records (EMR) at primary care level. Technologies are not yet widely available to most hospitals and many electronic data information standards not yet been adopted industry-wide. One of the most difficult barriers is the development of a standardized EMR. There are no defined set of recommendations for an EMR and no industry-wide standard for EMR (Morrisey, 2001). Due to the limited implementation of computer-assisted diagnostic and management tools only a few evaluations have been conducted and no definitive conclusions have been reached from the CDSS. The objective of this work is to identify the psychiatric problems using decision support system. The decision support system is designed using backpropagation and radial basis function neural networks. Section 2 presents the literature review on existing decision support systems. Section 3 describes backpropagation, radial basis function neural network and support vector machine models. Experimental results are given in Section 4. Section 5 concludes the paper.