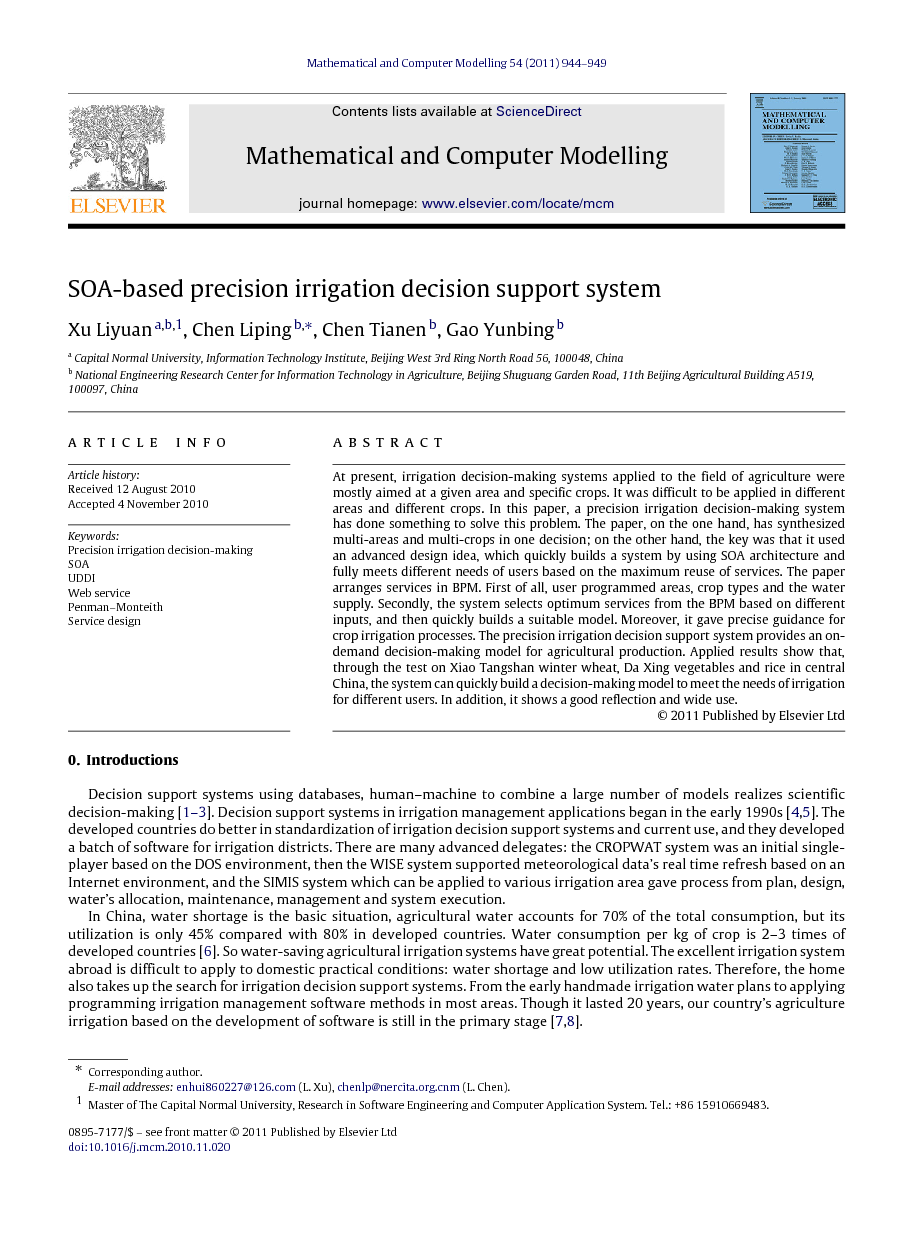 At present, irrigation decision-making systems applied to the field of agriculture were mostly aimed at a given area and specific crops. It was difficult to be applied in different areas and different crops. In this paper, a precision irrigation decision-making system has done something to solve this problem. The paper, on the one hand, has synthesized multi-areas and multi-crops in one decision; on the other hand, the key was that it used an advanced design idea, which quickly builds a system by using SOA architecture and fully meets different needs of users based on the maximum reuse of services. The paper arranges services in BPM. First of all, user programmed areas, crop types and the water supply. Secondly, the system selects optimum services from the BPM based on different inputs, and then quickly builds a suitable model. Moreover, it gave precise guidance for crop irrigation processes. The precision irrigation decision support system provides an on-demand decision-making model for agricultural production. Applied results show that, through the test on Xiao Tangshan winter wheat, Da Xing vegetables and rice in central China, the system can quickly build a decision-making model to meet the needs of irrigation for different users. In addition, it shows a good reflection and wide use.

Decision support systems using databases, human–machine to combine a large number of models realizes scientific decision-making [1], [2] and [3]. Decision support systems in irrigation management applications began in the early 1990s [4] and [5]. The developed countries do better in standardization of irrigation decision support systems and current use, and they developed a batch of software for irrigation districts. There are many advanced delegates: the CROPWAT system was an initial single-player based on the DOS environment, then the WISE system supported meteorological data’s real time refresh based on an Internet environment, and the SIMIS system which can be applied to various irrigation area gave process from plan, design, water’s allocation, maintenance, management and system execution. In China, water shortage is the basic situation, agricultural water accounts for 70% of the total consumption, but its utilization is only 45% compared with 80% in developed countries. Water consumption per kg of crop is 2–3 times of developed countries [6]. So water-saving agricultural irrigation systems have great potential. The excellent irrigation system abroad is difficult to apply to domestic practical conditions: water shortage and low utilization rates. Therefore, the home also takes up the search for irrigation decision support systems. From the early handmade irrigation water plans to applying programming irrigation management software methods in most areas. Though it lasted 20 years, our country’s agriculture irrigation based on the development of software is still in the primary stage [7] and [8]. At present, irrigation decision-making systems applied in agriculture are aimed at a given area and specific crops, it is difficult to be applied in different areas and different crops [9] and [10]. In addition, the system is mostly based on networks and results are shown in the form of a web. Business handling logic and decision-making logic are often solidified in code, various processes closely coupled. However agriculture itself is an advanced subject. With the related research methods and means of realization constantly updated, the original treatment method is likely to be eliminated. Therefore, the improvement of code-behind often affects not only consuming financial and material resources, but also causes the system to crash. So, using a framework of flexiblity in decision-making systems is needed; the system should not only implement the basic intelligent decision methods but also easily change related modules without affecting global deployment. This paper conducts research and implementation on these. Through the study of the Xiao Tang-Shan winter wheat, Da Xing vegetables and the rice in central China, we summarize a crop’s characteristics and irrigation regularity, and then design and implement for web service which deploy in BPM for system call. The system’s advantage is that it not only synthesizes many areas and various crops on irrigation decisions, but also adopts an advanced design idea; constructing the system with an SOA (Service Oriented Architecture) architecture, provides a decision model interfacing with agricultural production, fully satisfying customer needs on the basis of the maximum service reuse.

This paper studied the development direction of a precision irrigation technique, analyzed the existing irrigation decision software, and then put forward the advanced concepts of SOA which have been applied in the agriculture industry successfully. Take for example the typical process—precision irrigation unit level sufficient irrigation, we start from irrigation flow analysis, emphatically discuss the design principle of service, and finally present a design idea and achievement. Through the Xiao Tang-Shan winter wheat, Da Xing vegetables and rice in central China, the system can quickly build a decision-making model to meet the needs of irrigation for different users. In addition, it shows a good reflection and wide usability. Unfortunately, due to the short time available, we only focused on services and the system assembly model, and did not thoroughly ponder about the security of the system and the optimal design of the database. This will be dealt with in a further study.