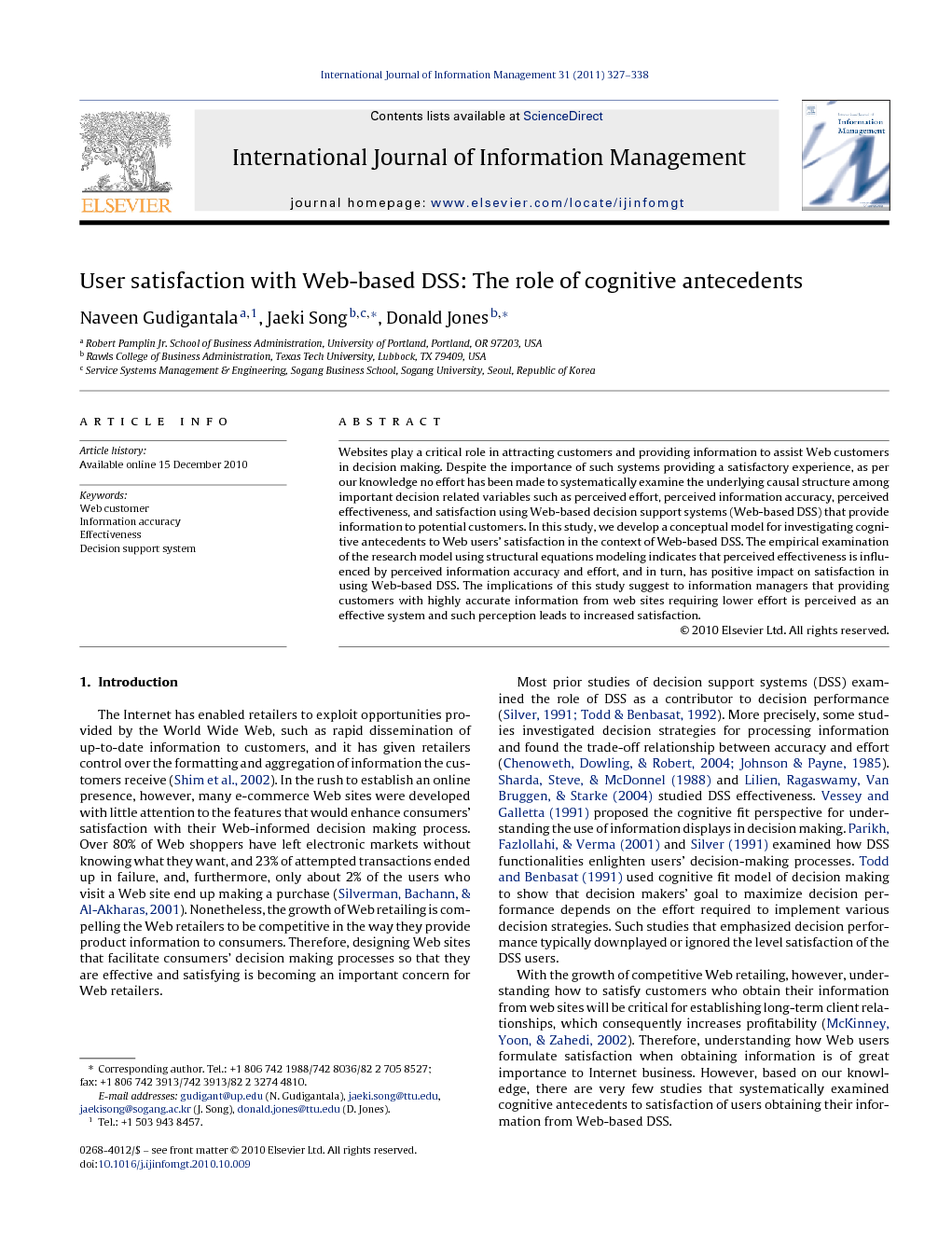 Websites play a critical role in attracting customers and providing information to assist Web customers in decision making. Despite the importance of such systems providing a satisfactory experience, as per our knowledge no effort has been made to systematically examine the underlying causal structure among important decision related variables such as perceived effort, perceived information accuracy, perceived effectiveness, and satisfaction using Web-based decision support systems (Web-based DSS) that provide information to potential customers. In this study, we develop a conceptual model for investigating cognitive antecedents to Web users’ satisfaction in the context of Web-based DSS. The empirical examination of the research model using structural equations modeling indicates that perceived effectiveness is influenced by perceived information accuracy and effort, and in turn, has positive impact on satisfaction in using Web-based DSS. The implications of this study suggest to information managers that providing customers with highly accurate information from web sites requiring lower effort is perceived as an effective system and such perception leads to increased satisfaction.

The Internet has enabled retailers to exploit opportunities provided by the World Wide Web, such as rapid dissemination of up-to-date information to customers, and it has given retailers control over the formatting and aggregation of information the customers receive (Shim et al., 2002). In the rush to establish an online presence, however, many e-commerce Web sites were developed with little attention to the features that would enhance consumers’ satisfaction with their Web-informed decision making process. Over 80% of Web shoppers have left electronic markets without knowing what they want, and 23% of attempted transactions ended up in failure, and, furthermore, only about 2% of the users who visit a Web site end up making a purchase (Silverman, Bachann, & Al-Akharas, 2001). Nonetheless, the growth of Web retailing is compelling the Web retailers to be competitive in the way they provide product information to consumers. Therefore, designing Web sites that facilitate consumers’ decision making processes so that they are effective and satisfying is becoming an important concern for Web retailers. Most prior studies of decision support systems (DSS) examined the role of DSS as a contributor to decision performance (Silver, 1991 and Todd and Benbasat, 1992). More precisely, some studies investigated decision strategies for processing information and found the trade-off relationship between accuracy and effort (Chenoweth et al., 2004 and Johnson and Payne, 1985). Sharda, Steve, & McDonnel (1988) and Lilien, Ragaswamy, Van Bruggen, & Starke (2004) studied DSS effectiveness. Vessey and Galletta (1991) proposed the cognitive fit perspective for understanding the use of information displays in decision making. Parikh, Fazlollahi, & Verma (2001) and Silver (1991) examined how DSS functionalities enlighten users’ decision-making processes. Todd and Benbasat (1991) used cognitive fit model of decision making to show that decision makers’ goal to maximize decision performance depends on the effort required to implement various decision strategies. Such studies that emphasized decision performance typically downplayed or ignored the level satisfaction of the DSS users. With the growth of competitive Web retailing, however, understanding how to satisfy customers who obtain their information from web sites will be critical for establishing long-term client relationships, which consequently increases profitability (McKinney, Yoon, & Zahedi, 2002). Therefore, understanding how Web users formulate satisfaction when obtaining information is of great importance to Internet business. However, based on our knowledge, there are very few studies that systematically examined cognitive antecedents to satisfaction of users obtaining their information from Web-based DSS. In this study, we advance a model of the decision making process while obtaining information using DSS in the Internet environment to address the following research question: What are the antecedents of Web-based DSS users’ satisfaction? To answer this question, we propose and test a research model which hypothesizes that perceived information accuracy and effort influence Web users’ perceived effectiveness, which in turn affects Web users’ overall satisfaction. This study was conducted in three phases to test our research model. In the first phase, from representative decision makers we identified important decision variables in our decision context (apartment selection) and obtained actual data to create realistic decision tasks. In the second phase, we developed three different Web sites, which varied in their effort demands and potential for perceived information accuracy vis-à-vis their user's preferences. In the third phase, we developed an instrument based on prior literature to measure important constructs, such as Web users’ satisfaction with Web-based DSS and its antecedents. The model was tested in a controlled laboratory experiment. Structural equation modeling was used for data analyses. In what follows, the next two sections provide background and propose the research model and hypotheses for the study. The subsequent two sections report research design and data analyses. In the final section, we provide the conclusion of this study.