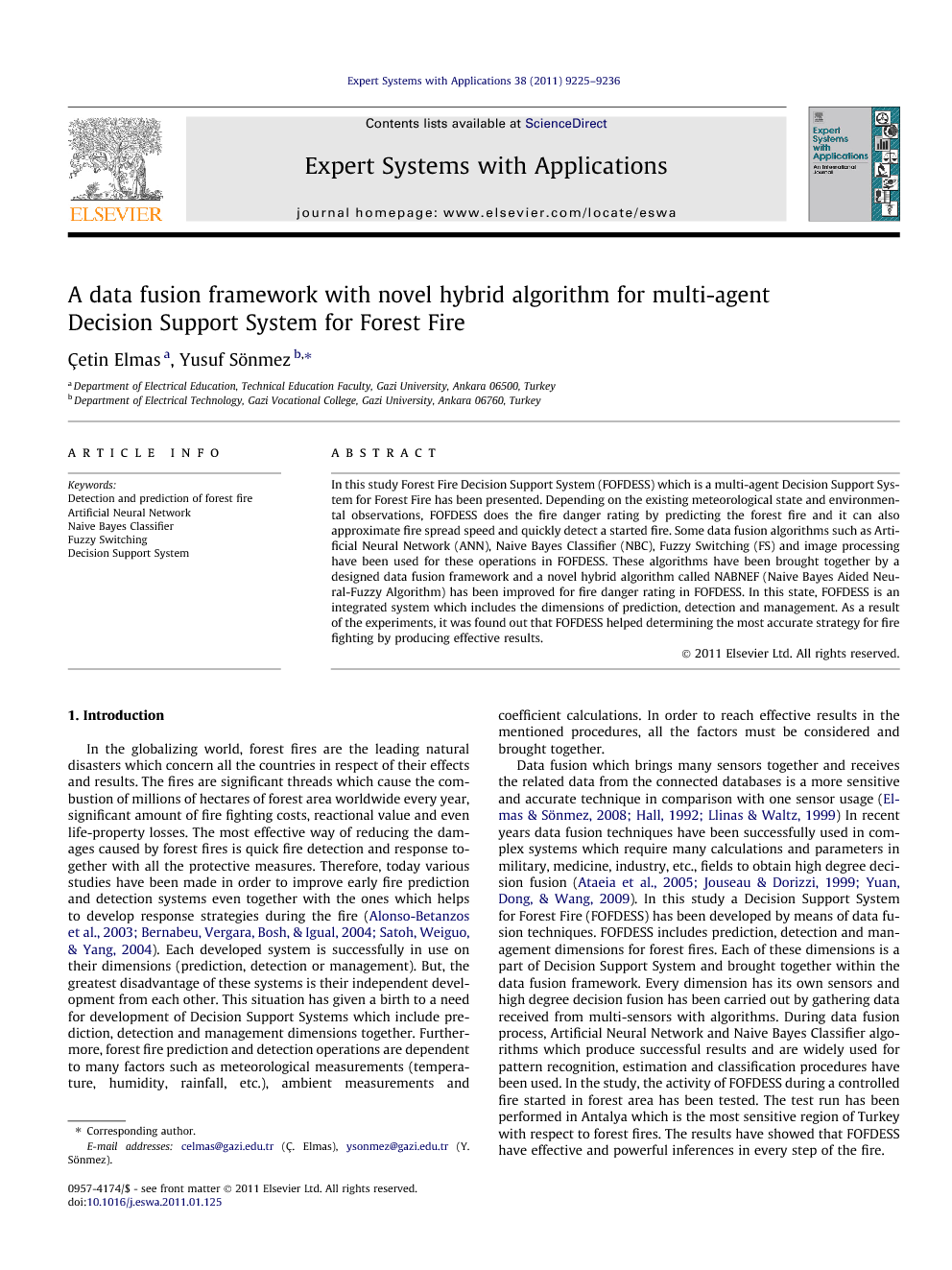 In this study Forest Fire Decision Support System (FOFDESS) which is a multi-agent Decision Support System for Forest Fire has been presented. Depending on the existing meteorological state and environmental observations, FOFDESS does the fire danger rating by predicting the forest fire and it can also approximate fire spread speed and quickly detect a started fire. Some data fusion algorithms such as Artificial Neural Network (ANN), Naive Bayes Classifier (NBC), Fuzzy Switching (FS) and image processing have been used for these operations in FOFDESS. These algorithms have been brought together by a designed data fusion framework and a novel hybrid algorithm called NABNEF (Naive Bayes Aided Neural-Fuzzy Algorithm) has been improved for fire danger rating in FOFDESS. In this state, FOFDESS is an integrated system which includes the dimensions of prediction, detection and management. As a result of the experiments, it was found out that FOFDESS helped determining the most accurate strategy for fire fighting by producing effective results.

In the globalizing world, forest fires are the leading natural disasters which concern all the countries in respect of their effects and results. The fires are significant threads which cause the combustion of millions of hectares of forest area worldwide every year, significant amount of fire fighting costs, reactional value and even life-property losses. The most effective way of reducing the damages caused by forest fires is quick fire detection and response together with all the protective measures. Therefore, today various studies have been made in order to improve early fire prediction and detection systems even together with the ones which helps to develop response strategies during the fire (Alonso-Betanzos et al., 2003, Bernabeu et al., 2004 and Satoh et al., 2004). Each developed system is successfully in use on their dimensions (prediction, detection or management). But, the greatest disadvantage of these systems is their independent development from each other. This situation has given a birth to a need for development of Decision Support Systems which include prediction, detection and management dimensions together. Furthermore, forest fire prediction and detection operations are dependent to many factors such as meteorological measurements (temperature, humidity, rainfall, etc.), ambient measurements and coefficient calculations. In order to reach effective results in the mentioned procedures, all the factors must be considered and brought together. Data fusion which brings many sensors together and receives the related data from the connected databases is a more sensitive and accurate technique in comparison with one sensor usage (Elmas and Sönmez, 2008, Hall, 1992 and Llinas and Waltz, 1999) In recent years data fusion techniques have been successfully used in complex systems which require many calculations and parameters in military, medicine, industry, etc., fields to obtain high degree decision fusion (Ataeia et al., 2005, Jouseau and Dorizzi, 1999 and Yuan et al., 2009). In this study a Decision Support System for Forest Fire (FOFDESS) has been developed by means of data fusion techniques. FOFDESS includes prediction, detection and management dimensions for forest fires. Each of these dimensions is a part of Decision Support System and brought together within the data fusion framework. Every dimension has its own sensors and high degree decision fusion has been carried out by gathering data received from multi-sensors with algorithms. During data fusion process, Artificial Neural Network and Naive Bayes Classifier algorithms which produce successful results and are widely used for pattern recognition, estimation and classification procedures have been used. In the study, the activity of FOFDESS during a controlled fire started in forest area has been tested. The test run has been performed in Antalya which is the most sensitive region of Turkey with respect to forest fires. The results have showed that FOFDESS have effective and powerful inferences in every step of the fire.

In this study, FOFDESS has been improved in order to minimize the damage resulted in forest fires. FOFDESS is an effective Decision Support System for Forest Fires which includes estimation, detection and management dimensions. At the estimation dimension, fire danger rating has carried out by hybrid NABNEF algorithm, at the management dimension, the fire spread speed of an existing fire is predicted by ANN and at the detection dimension, a just started fire at the observed forest area has early been detected by camera and wireless sensor networks. When considered from this point of view, the designed system not only makes an improvement on the technological state in the application field, but also it supplies the purposes of data fusion. In the data fusion framework, a healthier inference has been obtained by using data fusion techniques and algorithms and a more powerful estimation and detection have carried out for the forest fires. FOFDESS gives information to the operator before the fire, at the starting moment and during the fire so that it helps operator to develop the most accurate strategies for fighting against the fire.