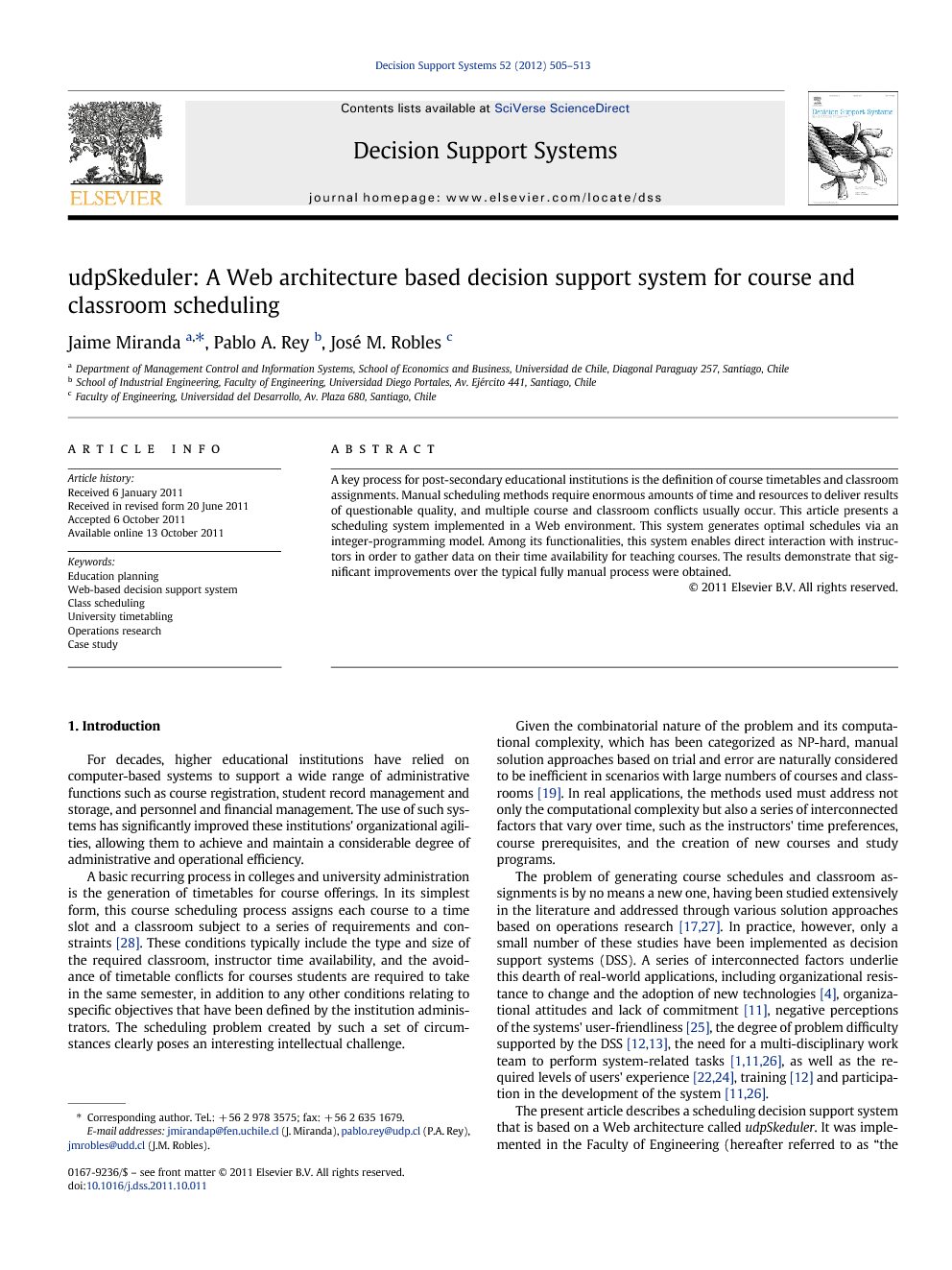 A key process for post-secondary educational institutions is the definition of course timetables and classroom assignments. Manual scheduling methods require enormous amounts of time and resources to deliver results of questionable quality, and multiple course and classroom conflicts usually occur. This article presents a scheduling system implemented in a Web environment. This system generates optimal schedules via an integer-programming model. Among its functionalities, this system enables direct interaction with instructors in order to gather data on their time availability for teaching courses. The results demonstrate that significant improvements over the typical fully manual process were obtained.► Class scheduling system implemented in a Web environment. ► We used a pattern based integer programming model. ► This system enables interaction with instructors through a user-friendly interface. ► We implement an efficient management of information by means of database filters. ► Results demonstrate significant improvements over the typical fully manual process.

For decades, higher educational institutions have relied on computer-based systems to support a wide range of administrative functions such as course registration, student record management and storage, and personnel and financial management. The use of such systems has significantly improved these institutions' organizational agilities, allowing them to achieve and maintain a considerable degree of administrative and operational efficiency. A basic recurring process in colleges and university administration is the generation of timetables for course offerings. In its simplest form, this course scheduling process assigns each course to a time slot and a classroom subject to a series of requirements and constraints [28]. These conditions typically include the type and size of the required classroom, instructor time availability, and the avoidance of timetable conflicts for courses students are required to take in the same semester, in addition to any other conditions relating to specific objectives that have been defined by the institution administrators. The scheduling problem created by such a set of circumstances clearly poses an interesting intellectual challenge. Given the combinatorial nature of the problem and its computational complexity, which has been categorized as NP-hard, manual solution approaches based on trial and error are naturally considered to be inefficient in scenarios with large numbers of courses and classrooms [19]. In real applications, the methods used must address not only the computational complexity but also a series of interconnected factors that vary over time, such as the instructors' time preferences, course prerequisites, and the creation of new courses and study programs. The problem of generating course schedules and classroom assignments is by no means a new one, having been studied extensively in the literature and addressed through various solution approaches based on operations research [17] and [27]. In practice, however, only a small number of these studies have been implemented as decision support systems (DSS). A series of interconnected factors underlie this dearth of real-world applications, including organizational resistance to change and the adoption of new technologies [4], organizational attitudes and lack of commitment [11], negative perceptions of the systems' user-friendliness [25], the degree of problem difficulty supported by the DSS [12] and [13], the need for a multi-disciplinary work team to perform system-related tasks [1], [11] and [26], as well as the required levels of users' experience [22] and [24], training [12] and participation in the development of the system [11] and [26]. The present article describes a scheduling decision support system that is based on a Web architecture called udpSkeduler. It was implemented in the Faculty of Engineering (hereafter referred to as “the Faculty”) at Universidad Diego Portales (UDP) in Santiago, Chile, where it has generated a series of benefits that will be described in the following sections. The system uses an integer-programming model in order to define optimal schedules, which simultaneously incorporates all of the problem's requirements and constraints, as well as any additional objectives that are set by the Faculty Board of Directors. Further benefits of the udpSkeduler implementation include a reduction in the time that is required for scheduling due to process automation, improvement in schedule quality with fewer human errors and timetable conflicts, the ability to easily and quickly explore and analyze multiple scenarios through a user-friendly interface, and a reduction in work load for planning staff, which frees them for other tasks. The structure of this article is as follows. Section 2 reviews the literature regarding the role of computer-based support systems in course schedule decision-making at educational institutions. Section 3 introduces the Faculty's timetabling problem and the various stages of the course scheduling process. Section 4 describes the udpSkeduler system and its constituent modules. Section 5 presents the results of the implementation, focusing on quantitative evidence of the improvements that are provided by the system. Finally, 6 and 7 discuss the computational experiments that were conducted with the system and present our conclusions.

A Web-based, course-scheduling and classroom-assignment system using an integer-programming model was developed for the Faculty of Engineering at Universidad Diego Portales. Known as udpSkeduler, the system has generated satisfactory course timetables and classroom space assignments on the Faculty's site. The schedules and assignments have fulfilled policy goals such as the use of the same classroom for each weekly session of every course, the elimination of the need for external classroom rentals an end to courses given in Faculty auditoriums. The results of the udpSkeduler implementation demonstrate that integration of the system into the course scheduling process has led to multiple benefits. First, the time required for certain stages of the process was significantly reduced from weeks to a couple of hours. Second, certain stages of the process were successfully automated. Third, course timetable conflicts and other human errors generated by the previous manual process were eliminated. Fourth, the system's mathematical programming model can analyze a large number of solutions and find the optimal solution. Fifth, multiple scenarios can be quickly and simultaneously evaluated in terms of several different objectives by means of simple variations in the system parameters, thus reducing uncertainty in the scheduling decisions and allowing contingency plans to be generated. Sixth, at the organizational level a new communication channel was created between Faculty instructors and planners that accelerates and simplifies the exchange of information, especially in regard to instructor time availability and timetable preferences. Finally, the rapidity of the scheduling process using udpSkeduler has allowed planners to devote more time to revising and fine-tuning definitive schedules and other tasks.