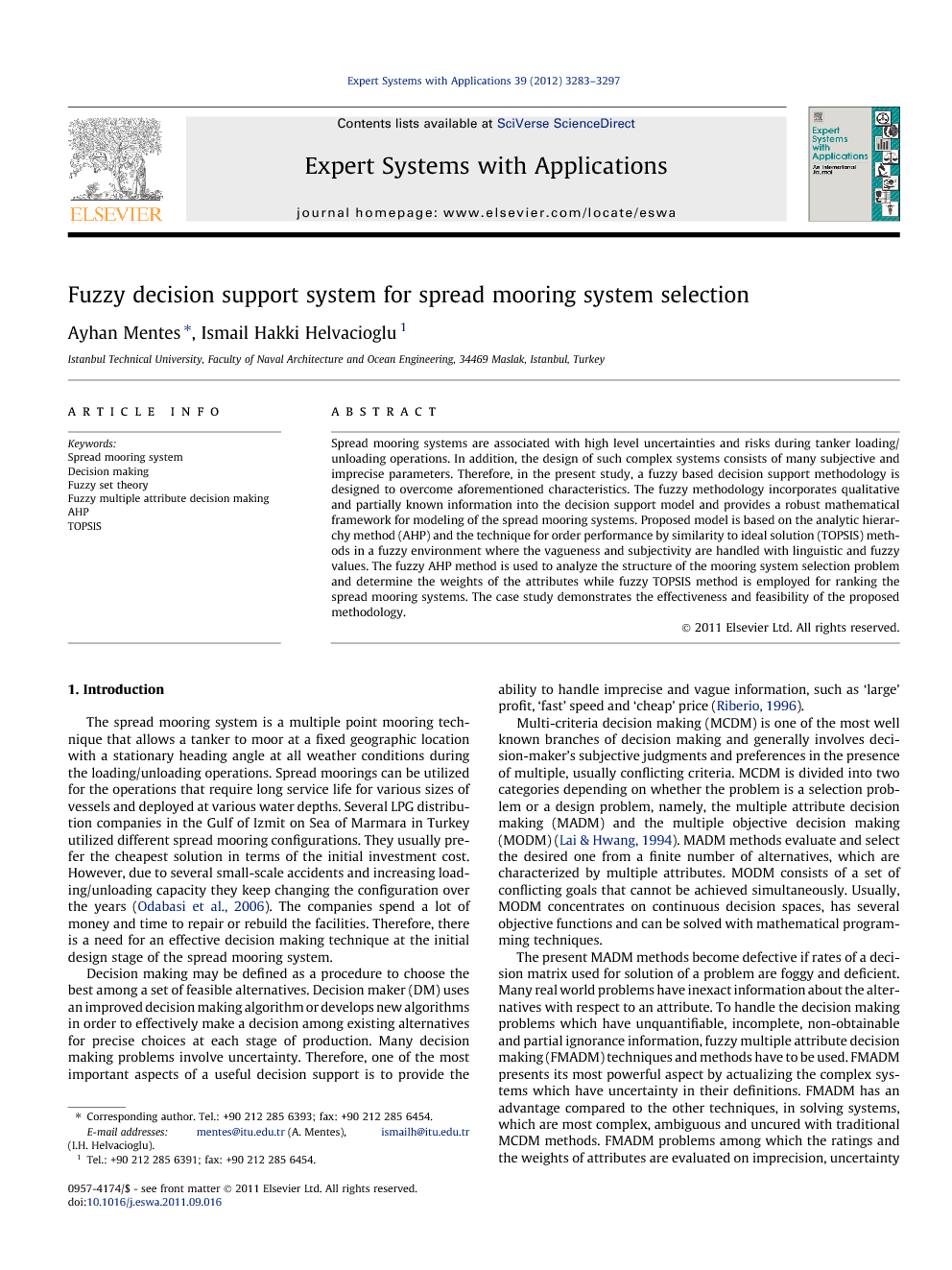 Spread mooring systems are associated with high level uncertainties and risks during tanker loading/unloading operations. In addition, the design of such complex systems consists of many subjective and imprecise parameters. Therefore, in the present study, a fuzzy based decision support methodology is designed to overcome aforementioned characteristics. The fuzzy methodology incorporates qualitative and partially known information into the decision support model and provides a robust mathematical framework for modeling of the spread mooring systems. Proposed model is based on the analytic hierarchy method (AHP) and the technique for order performance by similarity to ideal solution (TOPSIS) methods in a fuzzy environment where the vagueness and subjectivity are handled with linguistic and fuzzy values. The fuzzy AHP method is used to analyze the structure of the mooring system selection problem and determine the weights of the attributes while fuzzy TOPSIS method is employed for ranking the spread mooring systems. The case study demonstrates the effectiveness and feasibility of the proposed methodology.

The spread mooring system is a multiple point mooring technique that allows a tanker to moor at a fixed geographic location with a stationary heading angle at all weather conditions during the loading/unloading operations. Spread moorings can be utilized for the operations that require long service life for various sizes of vessels and deployed at various water depths. Several LPG distribution companies in the Gulf of Izmit on Sea of Marmara in Turkey utilized different spread mooring configurations. They usually prefer the cheapest solution in terms of the initial investment cost. However, due to several small-scale accidents and increasing loading/unloading capacity they keep changing the configuration over the years (Odabasi et al., 2006). The companies spend a lot of money and time to repair or rebuild the facilities. Therefore, there is a need for an effective decision making technique at the initial design stage of the spread mooring system. Decision making may be defined as a procedure to choose the best among a set of feasible alternatives. Decision maker (DM) uses an improved decision making algorithm or develops new algorithms in order to effectively make a decision among existing alternatives for precise choices at each stage of production. Many decision making problems involve uncertainty. Therefore, one of the most important aspects of a useful decision support is to provide the ability to handle imprecise and vague information, such as ‘large’ profit, ‘fast’ speed and ‘cheap’ price (Riberio, 1996). Multi-criteria decision making (MCDM) is one of the most well known branches of decision making and generally involves decision-maker’s subjective judgments and preferences in the presence of multiple, usually conflicting criteria. MCDM is divided into two categories depending on whether the problem is a selection problem or a design problem, namely, the multiple attribute decision making (MADM) and the multiple objective decision making (MODM) (Lai & Hwang, 1994). MADM methods evaluate and select the desired one from a finite number of alternatives, which are characterized by multiple attributes. MODM consists of a set of conflicting goals that cannot be achieved simultaneously. Usually, MODM concentrates on continuous decision spaces, has several objective functions and can be solved with mathematical programming techniques. The present MADM methods become defective if rates of a decision matrix used for solution of a problem are foggy and deficient. Many real world problems have inexact information about the alternatives with respect to an attribute. To handle the decision making problems which have unquantifiable, incomplete, non-obtainable and partial ignorance information, fuzzy multiple attribute decision making (FMADM) techniques and methods have to be used. FMADM presents its most powerful aspect by actualizing the complex systems which have uncertainty in their definitions. FMADM has an advantage compared to the other techniques, in solving systems, which are most complex, ambiguous and uncured with traditional MCDM methods. FMADM problems among which the ratings and the weights of attributes are evaluated on imprecision, uncertainty and vagueness are usually expressed by linguistic terms and then set into fuzzy numbers (Zimmermann, 1996). There are several external factors affecting the design of the spread mooring systems such as motion response, operational requirements, reliability, selection of installation methods, as well as the external forces on the system in the presence of wave, wind and current, etc. Some of these factors depend on deterministic factors while the others have fuzzy non-deterministic parameters. Therefore, there is a need for a fuzzy decision support algorithm that guides effective decisions to the most proper type of mooring system for different operation regions. The selection algorithm should use the design criteria and attributes such as characteristics of goals of utilization like oil/gas storage and offloading. The approach of using fuzzy multi attribute decision making will become the most proper method for the selection of a tanker-buoy mooring system. The objective of this paper is to improve a decision support model based on fuzzy AHP and fuzzy TOPSIS methods in selecting the mooring alternative for the gas companies situated near Yarimca on the Eastern Marmara Sea Region in Turkey. The paper incorporates the FST and the nature of subjectivity due to the ambiguity to achieve a flexible fuzzy decision support system approach suitable for uncertain environment. The rest of this paper is organized as follows: Section 2 briefly reviews the current literature on FST, fuzzy AHP and fuzzy TOPSIS methods. Section 3 defines the fuzzy set, fuzzy numbers and basic operations used in this study. Section 4 provides details of the proposed FMADM methodology. In Section 5, the proposed methodology is applied to the best spread mooring system selection problem. Lastly, concluding remarks and future research opportunities are addressed in the final section.

This paper proposes a fuzzy based multiple attribute decision making methodology for the selection of the most proper spread mooring system in a simple and straightforward manner. In the evaluation and solution processes, fuzzy AHP and fuzzy TOPSIS methods are utilized. Fuzzy AHP method is utilized to determine the weights of the attributes of the performance evaluation hierarchy and fuzzy TOPSIS method is used for ranking the alternatives of the spread mooring system. By using fuzzy AHP and fuzzy TOPSIS methods, uncertainty and vagueness from the subjective awareness and the experiences of decision makers can be effectively represented and solved. Eventually, the most effective decision is obtained. The methodology has the following advantages compared to the other decision making techniques: •The methodology reduces the dependency of the decision support model on human judgment by using the pair-wise comparisons. •The decision support model based on subjective and fuzzy weights is applied to calculate weights of the attributes and overall rating scores of the alternatives. •It is very suitable for solving the multiple attributive group decision making problems under fuzzy environment. •The proposed approach is proven to be practical and effective for analyzing and ranking mooring system alternatives with respect to multiple conflicting attributes. •The methodology provides researchers with an effective tool for evaluating fuzzy representations for modeling subjective and ambiguous situations. •The sensitivity analysis gives the attitude of the alternatives under different main attributes weights. •The methodology has been very versatile and flexible in applications. Therefore, it can be used and applied in other marine technology related decision making problems. As future studies, systematic investigation for different types of weighting, defuzzification and ranking techniques can be carried out to see the effects on the selection problem.