عنوان انگلیسی
Social influence on the use of Clinical Decision Support Systems: Revisiting the Unified Theory of Acceptance and Use of Technology by the fuzzy DEMATEL technique
دانلود فوری مقاله + سفارش ترجمه 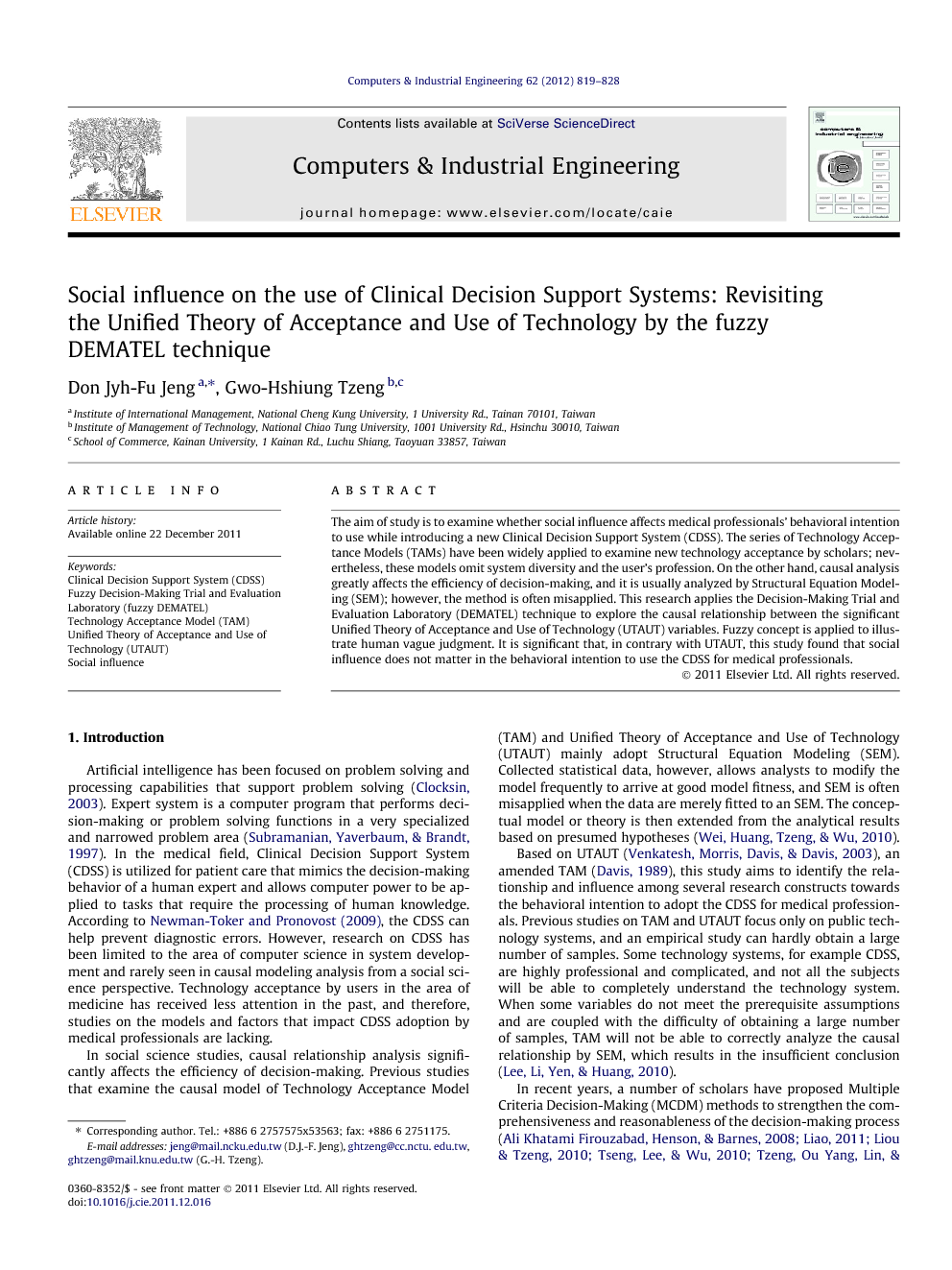 The aim of study is to examine whether social influence affects medical professionals’ behavioral intention to use while introducing a new Clinical Decision Support System (CDSS). The series of Technology Acceptance Models (TAMs) have been widely applied to examine new technology acceptance by scholars; nevertheless, these models omit system diversity and the user’s profession. On the other hand, causal analysis greatly affects the efficiency of decision-making, and it is usually analyzed by Structural Equation Modeling (SEM); however, the method is often misapplied. This research applies the Decision-Making Trial and Evaluation Laboratory (DEMATEL) technique to explore the causal relationship between the significant Unified Theory of Acceptance and Use of Technology (UTAUT) variables. Fuzzy concept is applied to illustrate human vague judgment. It is significant that, in contrary with UTAUT, this study found that social influence does not matter in the behavioral intention to use the CDSS for medical professionals.

Artificial intelligence has been focused on problem solving and processing capabilities that support problem solving (Clocksin, 2003). Expert system is a computer program that performs decision-making or problem solving functions in a very specialized and narrowed problem area (Subramanian, Yaverbaum, & Brandt, 1997). In the medical field, Clinical Decision Support System (CDSS) is utilized for patient care that mimics the decision-making behavior of a human expert and allows computer power to be applied to tasks that require the processing of human knowledge. According to Newman-Toker and Pronovost (2009), the CDSS can help prevent diagnostic errors. However, research on CDSS has been limited to the area of computer science in system development and rarely seen in causal modeling analysis from a social science perspective. Technology acceptance by users in the area of medicine has received less attention in the past, and therefore, studies on the models and factors that impact CDSS adoption by medical professionals are lacking. In social science studies, causal relationship analysis significantly affects the efficiency of decision-making. Previous studies that examine the causal model of Technology Acceptance Model (TAM) and Unified Theory of Acceptance and Use of Technology (UTAUT) mainly adopt Structural Equation Modeling (SEM). Collected statistical data, however, allows analysts to modify the model frequently to arrive at good model fitness, and SEM is often misapplied when the data are merely fitted to an SEM. The conceptual model or theory is then extended from the analytical results based on presumed hypotheses (Wei, Huang, Tzeng, & Wu, 2010). Based on UTAUT (Venkatesh, Morris, Davis, & Davis, 2003), an amended TAM (Davis, 1989), this study aims to identify the relationship and influence among several research constructs towards the behavioral intention to adopt the CDSS for medical professionals. Previous studies on TAM and UTAUT focus only on public technology systems, and an empirical study can hardly obtain a large number of samples. Some technology systems, for example CDSS, are highly professional and complicated, and not all the subjects will be able to completely understand the technology system. When some variables do not meet the prerequisite assumptions and are coupled with the difficulty of obtaining a large number of samples, TAM will not be able to correctly analyze the causal relationship by SEM, which results in the insufficient conclusion (Lee, Li, Yen, & Huang, 2010). In recent years, a number of scholars have proposed Multiple Criteria Decision-Making (MCDM) methods to strengthen the comprehensiveness and reasonableness of the decision-making process (Ali Khatami Firouzabad et al., 2008, Liao, 2011, Liou and Tzeng, 2010, Tseng et al., 2010, Tzeng et al., 2005 and Yang et al., 2008), and the Decision-Making Trial and Evaluation Laboratory (DEMATEL) technique is one of the methods that supports MCDM in analyzing the impact relations within a framework. In many cases, however, the judgments of decision-making are often given as crisp values, which these values are an inadequate reflection of the vagueness of the real world (Bellman and Zadeh, 1970 and Zadeh, 1975). Human judgment about preferences are often unclear and hard to estimate by exact numerical values, thus fuzzy concept is necessary for handling problems characterized by vagueness and imprecision (Zadeh, 1975). Hence, there is a need to extend the DEMATEL technique with fuzzy concept for making better decisions in fuzzy environments. To improve the above-mentioned drawbacks, the partial UTAUT variables are treated as MCDM criteria to address dependent relationships, and the fuzzy DEMATEL technique is applied to find the core variables that affect the intention of medical professionals to use the CDSS. The rest of this paper is organized as follows. In Section 2, previous literature is reviewed to form the framework of this study. In Section 3, the conventional and fuzzy DEMATEL techniques are described. In Section 4, an empirical study is presented. In Section 5, the research findings are discussed, and their practical implications are drawn. Finally, concluding remarks are presented in Section 6.

Does social influence matter in the use of expert systems? This research found no significant influence on medical doctors in adopting the CDSS. This study applied the fuzzy DEMATEL technique, where the fuzzy concept is applied to address the vagueness of human judgments and approximate reason it. The research finding contradicts the UTAUT and further proves the UTAUT can vary depending on the sampled objective, profession, and systems. This research is among limited studies attempting to explore the use of expert systems from a social science perspective. In addition to its academic contributions, the findings of this study may also provide information for systems developers in designing a CDSS, as well as providing key marketing insights while introducing a new CDSS to medical professionals. In this study, the fuzzy DEMATEL technique was adopted to explore cause-and-effect relationships from a top-down approach. Compared with the SEM, it reduces the model specifications errors, minimizes the occurrence of capitalization on chance error, and maintains the maturity of confirmatory. Causal analysis largely influences the effectiveness of decision-making and operation actions. This study demonstrated that the fuzzy DEMATEL technique may be an efficient, complementary, and effective approach for examining causal relationships. This work only study on those key factors in UTAUT. Future research may further examine the complete model and combine the fuzzy DEMATEL technique with MCDM methods for strategic improvement.