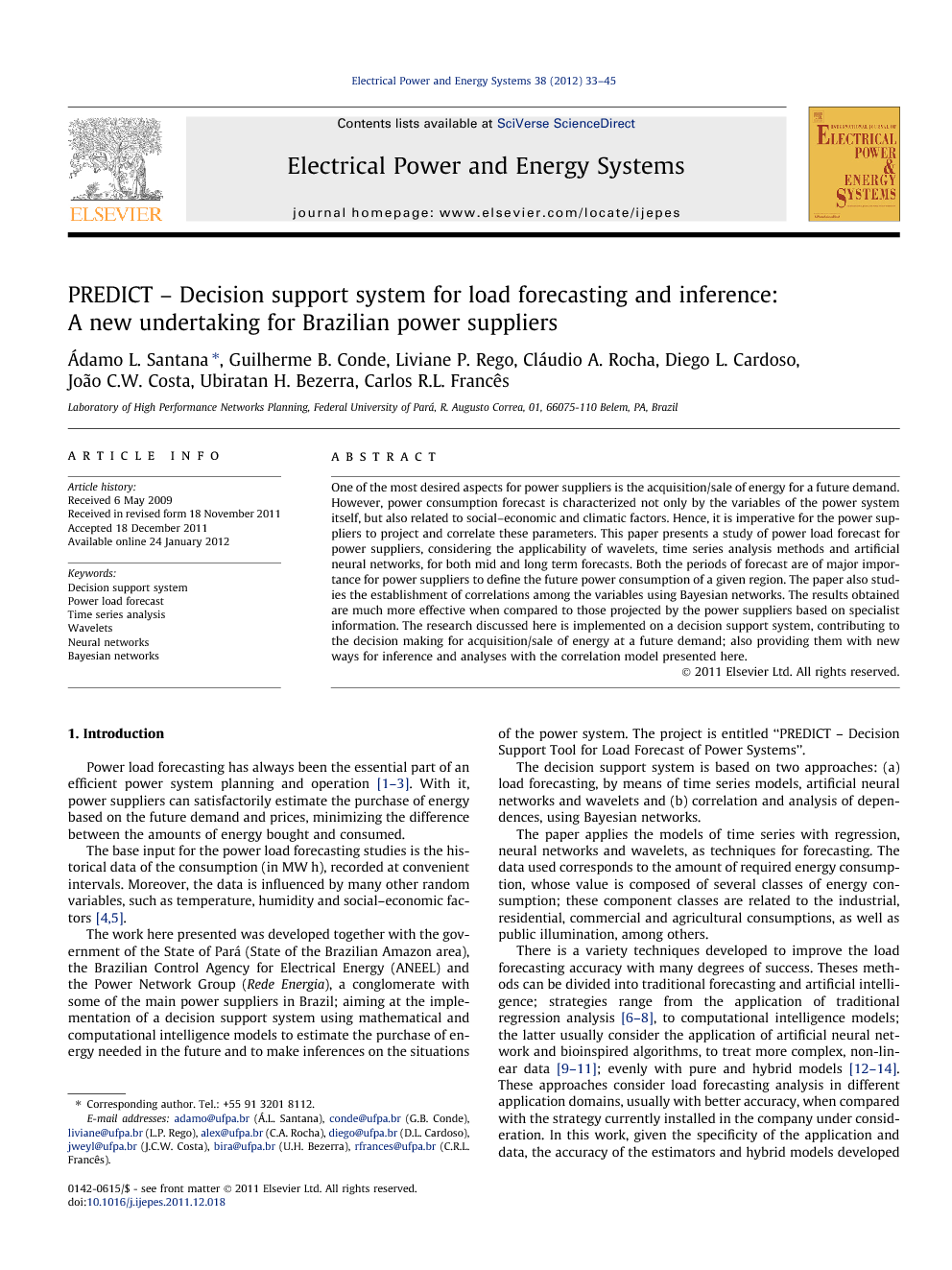 One of the most desired aspects for power suppliers is the acquisition/sale of energy for a future demand. However, power consumption forecast is characterized not only by the variables of the power system itself, but also related to social–economic and climatic factors. Hence, it is imperative for the power suppliers to project and correlate these parameters. This paper presents a study of power load forecast for power suppliers, considering the applicability of wavelets, time series analysis methods and artificial neural networks, for both mid and long term forecasts. Both the periods of forecast are of major importance for power suppliers to define the future power consumption of a given region. The paper also studies the establishment of correlations among the variables using Bayesian networks. The results obtained are much more effective when compared to those projected by the power suppliers based on specialist information. The research discussed here is implemented on a decision support system, contributing to the decision making for acquisition/sale of energy at a future demand; also providing them with new ways for inference and analyses with the correlation model presented here.

Power load forecasting has always been the essential part of an efficient power system planning and operation [1], [2] and [3]. With it, power suppliers can satisfactorily estimate the purchase of energy based on the future demand and prices, minimizing the difference between the amounts of energy bought and consumed. The base input for the power load forecasting studies is the historical data of the consumption (in MW h), recorded at convenient intervals. Moreover, the data is influenced by many other random variables, such as temperature, humidity and social–economic factors [4] and [5]. The work here presented was developed together with the government of the State of Pará (State of the Brazilian Amazon area), the Brazilian Control Agency for Electrical Energy (ANEEL) and the Power Network Group (Rede Energia), a conglomerate with some of the main power suppliers in Brazil; aiming at the implementation of a decision support system using mathematical and computational intelligence models to estimate the purchase of energy needed in the future and to make inferences on the situations of the power system. The project is entitled “PREDICT – Decision Support Tool for Load Forecast of Power Systems”. The decision support system is based on two approaches: (a) load forecasting, by means of time series models, artificial neural networks and wavelets and (b) correlation and analysis of dependences, using Bayesian networks. The paper applies the models of time series with regression, neural networks and wavelets, as techniques for forecasting. The data used corresponds to the amount of required energy consumption, whose value is composed of several classes of energy consumption; these component classes are related to the industrial, residential, commercial and agricultural consumptions, as well as public illumination, among others. There is a variety techniques developed to improve the load forecasting accuracy with many degrees of success. Theses methods can be divided into traditional forecasting and artificial intelligence; strategies range from the application of traditional regression analysis [6], [7] and [8], to computational intelligence models; the latter usually consider the application of artificial neural network and bioinspired algorithms, to treat more complex, non-linear data [9], [10] and [11]; evenly with pure and hybrid models [12], [13] and [14]. These approaches consider load forecasting analysis in different application domains, usually with better accuracy, when compared with the strategy currently installed in the company under consideration. In this work, given the specificity of the application and data, the accuracy of the estimators and hybrid models developed for this particular domain will be compared based with the power supplier’s models in effect for this task. This work widens the previous study for load forecasting in [15], by incorporating more complex and sophisticated models, also considering the anomalies in the series, its intrinsic monthly and annual growth rate; as well as improving the estimator by separately treating the trends and fluctuations with wavelets based framework. In order to provide a comprehensive decision support system, while considering demands by domain experts, together with more accurate models for mid and long term forecasting, tools were also implemented to measure the impact that other random variables have on the power consumption; such that new and alternate scenarios can be inferred considering different settings for electrical system operation (i.e. whether they are more economic, safe and/or reliable). Thus, the correlation of some exogenous variables to the electrical system, specifically related to climatic and social–economic factors, served as basis for the correlation and inference studies performed here. The use of diagnostics modelling analyse the impact that certain factors (endogenous or exogenous) have on the operation, distribution and planning of electrical systems has attracted much attention in the literature; examples of this are: fault diagnosis of equipment; detection of frauds and other non-technical losses; reliability assessment of electrical systems; and scenario analysis of power consumption [16], [17] and [18]. Hence the use of Bayesian networks to codify the probabilistic relations of the variables and to make inferences on the conditions of the power system from the historical consumption and its correlation with the climatic and social–economic data. This paper is organized as follows: the regression method for load forecast is subject of Section 2. Section 3 presents the neural networks model used and the definition of its parameters. Section 4 presents the wavelets model applied for the forecasting. In Section 5, the Bayesian networks for measuring the correlations from the consumption, climatic and social–economic conditions are presented. Section 6 presents the final remarks of the paper.

The objective of this study is to diagnose the relations among the consumption and economic and climatic aspects of the State of Pará, as well as to study forecasting models for the power consumption. In this paper, three techniques for power load forecasting were applied: by using regression methods, neural networks and wavelets models. In the tests, it was observed for all the estimators studied a good capacity of adjustment and prediction, presenting percentage errors below the ones currently seen by the traditional methods used by the power suppliers; with the wavelets model improving the multiple regression method, outperforming its results. This improvement in the error reduction represents, evidently, a considerable economy for energy purchase in a future market. As a distinguishing aspect, it is also pointed out that, as it could be observed by the obtained results, the estimator based on neural models presented an exceptional performance for mid term forecast of up to 1 year, presenting a residual error value; but, when considering a forecasting for longer periods, the models produce anomalous values with respect to the growth of the consumption and, thus, errors that increase gradually; being the wavelets model with multiple regression a better alternative in this case. It is worth mentioning that the models presented here, implemented in the Predict project, are being used by the power supplier of the State of Pará as basis for analysis and estimate of future demand consumption. They are also being implemented by the other four power suppliers of the same group, spread throughout the Brazilian territory. From this point of view, the main contribution of this work is to provide a decision support system, applying the process of pattern extraction from the power consumption and estimating it, in order to establish more advantageous contracts of energy purchase in the future market for the power suppliers, as well as to provide ways to underpin government programs for social inclusion; especially given that the expansion of the power supply in the Amazonian region is a predominant factor of social development.