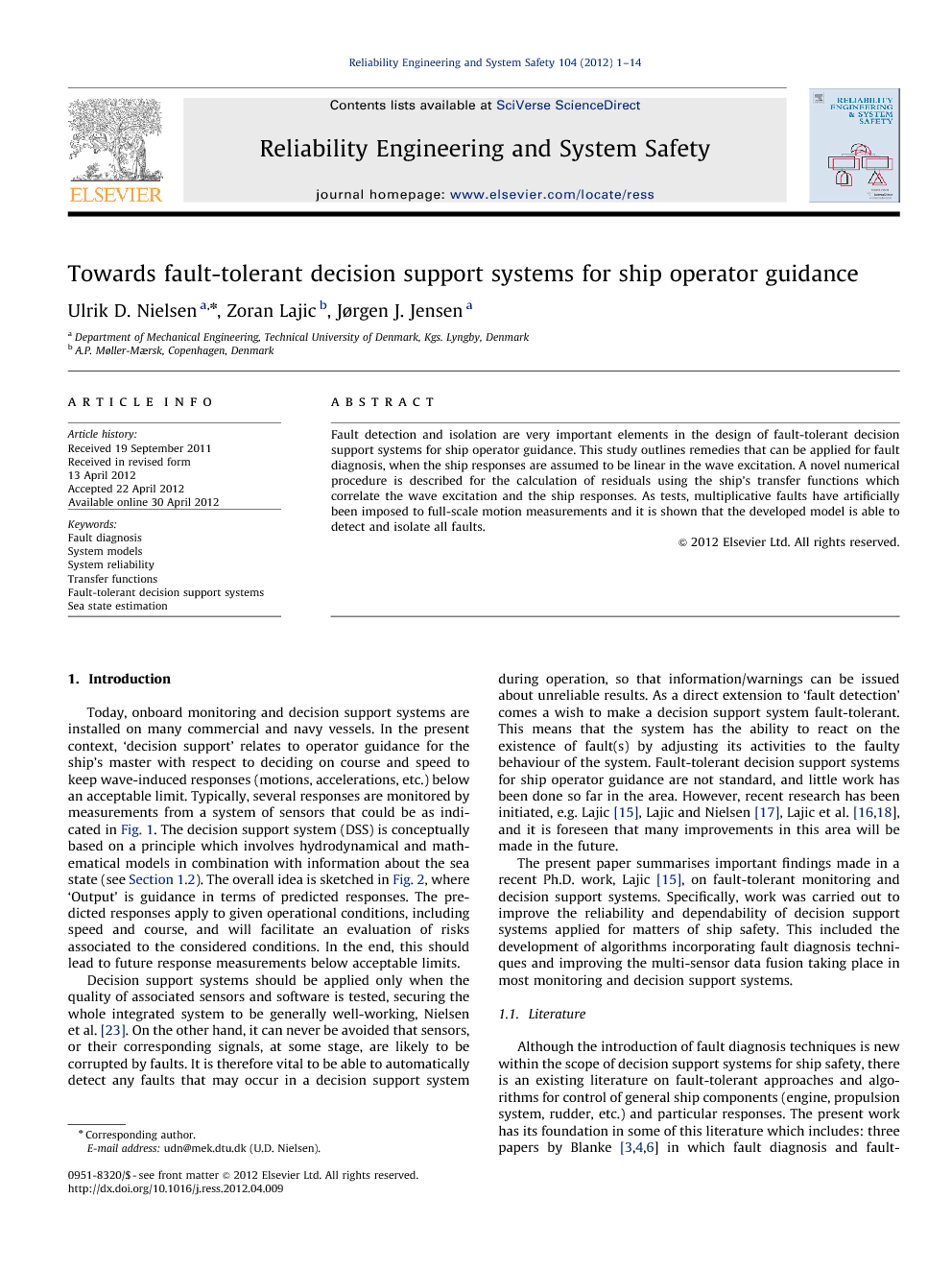 Fault detection and isolation are very important elements in the design of fault-tolerant decision support systems for ship operator guidance. This study outlines remedies that can be applied for fault diagnosis, when the ship responses are assumed to be linear in the wave excitation. A novel numerical procedure is described for the calculation of residuals using the ship's transfer functions which correlate the wave excitation and the ship responses. As tests, multiplicative faults have artificially been imposed to full-scale motion measurements and it is shown that the developed model is able to detect and isolate all faults.

Today, onboard monitoring and decision support systems are installed on many commercial and navy vessels. In the present context, ‘decision support’ relates to operator guidance for the ship's master with respect to deciding on course and speed to keep wave-induced responses (motions, accelerations, etc.) below an acceptable limit. Typically, several responses are monitored by measurements from a system of sensors that could be as indicated in Fig. 1. The decision support system (DSS) is conceptually based on a principle which involves hydrodynamical and mathematical models in combination with information about the sea state (see Section 1.2). The overall idea is sketched in Fig. 2, where ‘Output’ is guidance in terms of predicted responses. The predicted responses apply to given operational conditions, including speed and course, and will facilitate an evaluation of risks associated to the considered conditions. In the end, this should lead to future response measurements below acceptable limits.Decision support systems should be applied only when the quality of associated sensors and software is tested, securing the whole integrated system to be generally well-working, Nielsen et al. [23]. On the other hand, it can never be avoided that sensors, or their corresponding signals, at some stage, are likely to be corrupted by faults. It is therefore vital to be able to automatically detect any faults that may occur in a decision support system during operation, so that information/warnings can be issued about unreliable results. As a direct extension to ‘fault detection’ comes a wish to make a decision support system fault-tolerant. This means that the system has the ability to react on the existence of fault(s) by adjusting its activities to the faulty behaviour of the system. Fault-tolerant decision support systems for ship operator guidance are not standard, and little work has been done so far in the area. However, recent research has been initiated, e.g. Lajic [15], Lajic and Nielsen [17], Lajic et al. [16] and [18], and it is foreseen that many improvements in this area will be made in the future. The present paper summarises important findings made in a recent Ph.D. work, Lajic [15], on fault-tolerant monitoring and decision support systems. Specifically, work was carried out to improve the reliability and dependability of decision support systems applied for matters of ship safety. This included the development of algorithms incorporating fault diagnosis techniques and improving the multi-sensor data fusion taking place in most monitoring and decision support systems. 1.1. Literature Although the introduction of fault diagnosis techniques is new within the scope of decision support systems for ship safety, there is an existing literature on fault-tolerant approaches and algorithms for control of general ship components (engine, propulsion system, rudder, etc.) and particular responses. The present work has its foundation in some of this literature which includes: three papers by Blanke [3], [4] and [6] in which fault diagnosis and fault-tolerant control approaches are advocated for as means to enhance maritime and navigational safety. In Blanke et al. [7] the re-configuration possibilities for a ship propulsion system with a main engine and a controllable pitch propeller have been analysed and it has been demonstrated how fault tolerance could be achieved against a critical sensor failure. Similarly, sensor fault-tolerant control for a ship propulsion system is presented in Wu et al. [31], and implementation of the onboard control and monitoring system for unmanned underwater vehicles has been presented in Tiano et al. [30]. Furthermore, applications have been presented for early detection of parametric roll by Galeazzi et al. [10] and [11]. In general, any fault changes the system behaviour. Thus, the consequence of a fault is that the system behaviour moves from the set B0B0 towards the set BfBf. In the case of a common input u, the two systems – faultless and faulty – will give different outputs yA and yB, respectively. The change in the system behaviour makes the detection and isolation of a fault possible. However, the measurement information (u,y) alone is not sufficient, but a dynamical model, which describes the nominal system behaviour, is necessary. The system model describes the behaviour of the faultless and the faulty system which means that the model restricts the possible I/O pairs to those that appear in the behaviour B0B0 or BfBf. In other words, the model is a set of constraints on the signals u and y in the system. In fault diagnosis both the input u and the output y will be known and it is checked whether the I/O pair belongs to the specific behaviour.

In the present work, ideas and approaches to increase the reliability and dependability of monitoring and decision support systems have been developed. In this context, matters of ship safety are the main concern for the studied systems. Specifically, fault diagnosis techniques have been considered for onboard systems aiming at operator guidance with respect to course and speed of the vessel. Decision support systems need an estimate of the on-site sea state as a fundamental input. In case sea state estimation is conducted by the wave buoy analogy [20] and [21] the best solution is to use three different ship responses and usually several responses are available on today's commercial and naval vessels. However, faulty signals should be discarded from the procedure for sea state estimation if it is possible, if not the fault should be estimated. In the paper a specific and novel model for fault diagnosis have been discussed. The new numerical procedure is derived in the frequency domain and relies on linear spectral analysis. In this way, it is possible to define equations which correlate different ship responses through corresponding transfer functions. The model was tested using full-scale motion measurements from a container ship, where the data was analysed as a post-voyage process. The following points can be associated to the outcome of the test: •Multiplicative faults were added artificially to the motion measurements and the sensitivity of the residuals to the sensor fault was investigated. •The residuals were based on wave height estimation and were evaluated by the GLR test. •All the imposed faults were detected and isolated. Fault detection and isolation are very important elements in the design of fault-tolerant decision support systems and this study has outlined remedies that can be applied for this purpose, when the ship responses are assumed to be linear in the wave excitation. In case of a non-linear model, Lajic [15] should be consulted and [15] also discusses the possibility to use Volterra theory for transforming a non-linear time domain model into a frequency domain model without linearisation. 6.1. Future work In the future, the frequency domain model should be made even more robust. In particular, it would be of interest to consider the behaviour to faults imposed as (slow) drifts in signals, since this is a difficult but highly relevant problem. Moreover, it should be considered to relax on the crude assumptions imposed in the sea state estimation carried out as part of the residual evaluation. This includes, among others, the introduction of more realistic bi-modal wave spectra, and to consider scenarios where the wave direction is not necessarily equal to the wind direction.