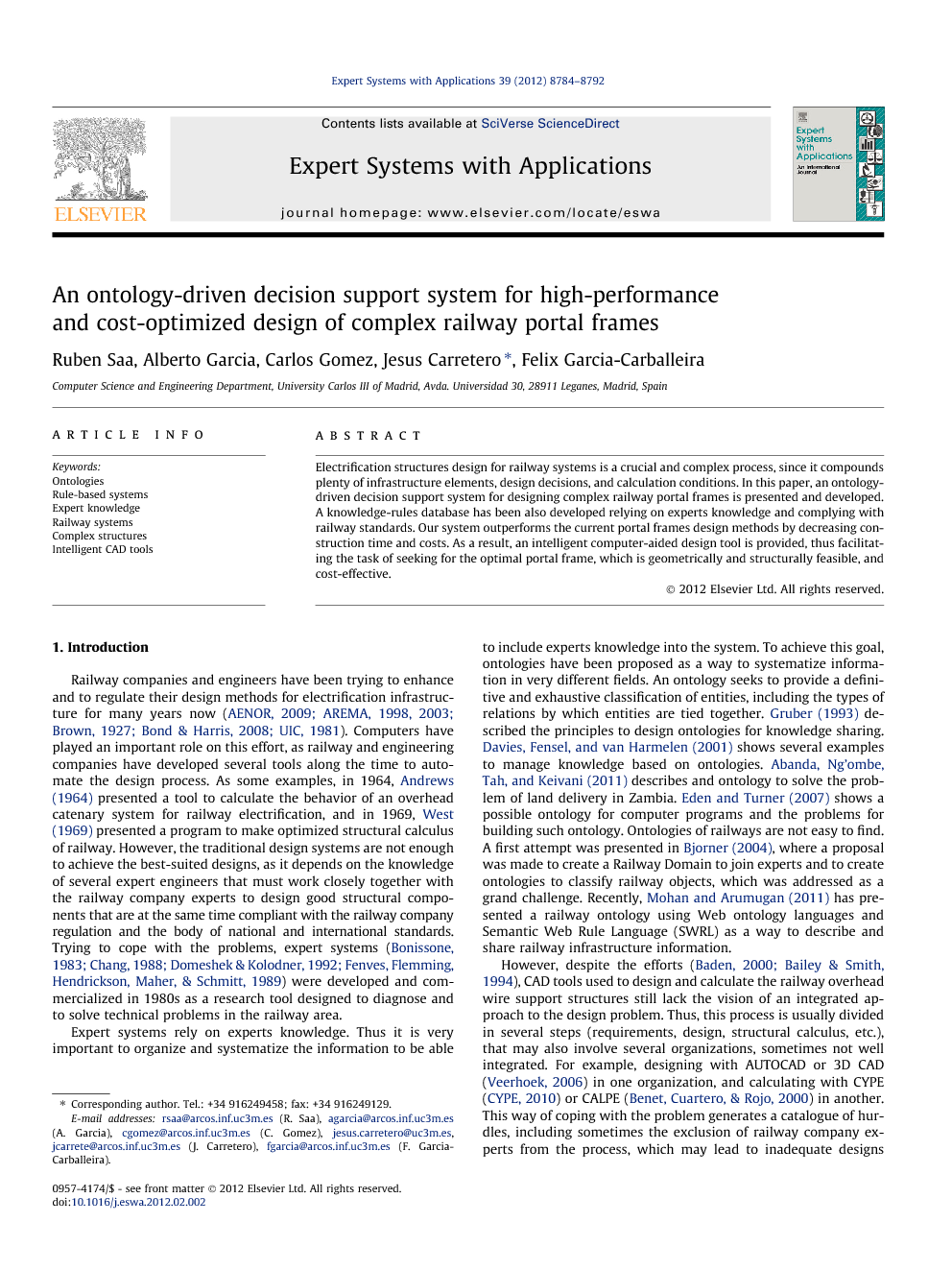 Electrification structures design for railway systems is a crucial and complex process, since it compounds plenty of infrastructure elements, design decisions, and calculation conditions. In this paper, an ontology-driven decision support system for designing complex railway portal frames is presented and developed. A knowledge-rules database has been also developed relying on experts knowledge and complying with railway standards. Our system outperforms the current portal frames design methods by decreasing construction time and costs. As a result, an intelligent computer-aided design tool is provided, thus facilitating the task of seeking for the optimal portal frame, which is geometrically and structurally feasible, and cost-effective.

In this paper, we have presented an intelligent computer-aided design tool, named SIA, that helps railway infrastructure designers to design and calculate safer and more efficient complex structures for railway electrification systems, especially overhead wire support structures such as cantilevers and frame portals. The final goal of that tool is to help designers to build infrastructure for the electric railway transport that are compliant with the existing normative and safe from the circulation and structural point of view to avoid dangerous situations that arise currently due to mistakes in design. SIA follows a holistic approach to design, including facilities to automatically build from scratch detailed structures, including platforms, tracks, complex railway portals, catenaries and electrification systems. Our tool delivers an analysis of three-dimensional structures, detailed component calculations, election of minimum cost and minimum weight designs, and constructive plans adjusted to the millimeter of the optimal solution. The final result is the project documentation that can be provided to the building company. The novelty of this research is the holistic approach of including all railway systems, with the intention of creating a knowledge system to incorporate automatically experts knowledge by using a rules engine, and the possibility of making automatically infrastructure design choosing optimal solutions, which will enhance the system efficiency and safety. SIA is a very complex system and it can be expanded with many functionalities. However, we have already implemented a prototype with includes a powerful functionality for tracks and electrification. ADIF experts are currently testing it, which is resulting in new enhancements and functionality. Its impact in the railway business may be important, as we do not know any tool similar to SIA, and it may allow to railway and engineering companies to make faster and safer designs, avoiding also expenses due to oversized systems or to failures due to erroneous designs. The link with the proposed challenges is clear. First, better design and calculations enhance safety because it avoids failures. Also the simulation of the interaction between pantograph and contact wire allows avoiding design failures in switches, where two contact wires are present and the pantograph needs to be always in contact with at least one of them and never go on any wire to avoid breaking it and the catenary. Those failures are serious because they are very expensive to be repaired and causes long traffic interruptions, thus SIA may help to make railway safer and easier to maintain. SIA can help to reduce design costs, by decreasing the design time and getting better solutions, by shortening the time for the infrastructure project to be available, and by reducing traffic interruptions due to failures. We have estimated that the design time for a portal could be reduced by two magnitude orders. The track and electrification infrastructure produced with SIA includes only normalized equipment and strongly reduces the catalog of systems installed, which also generates cost reductions in maintenance and stock for components. As a result, maintenance teams may achieve a shorter answer and repair time to failures and they can be more skilled in the system to maintain. One shortcoming of our work is the difficulty to get infrastructure information from the railway companies to feed databases. Usually they have their own catalog and inventory, and they are not very collaborative among companies. The European level initiative for railway interoperability could be an important step in this address. Achieving the collaboration of manufacturers of railway components could be another one. More effort will be devoted to both groups in a near future.