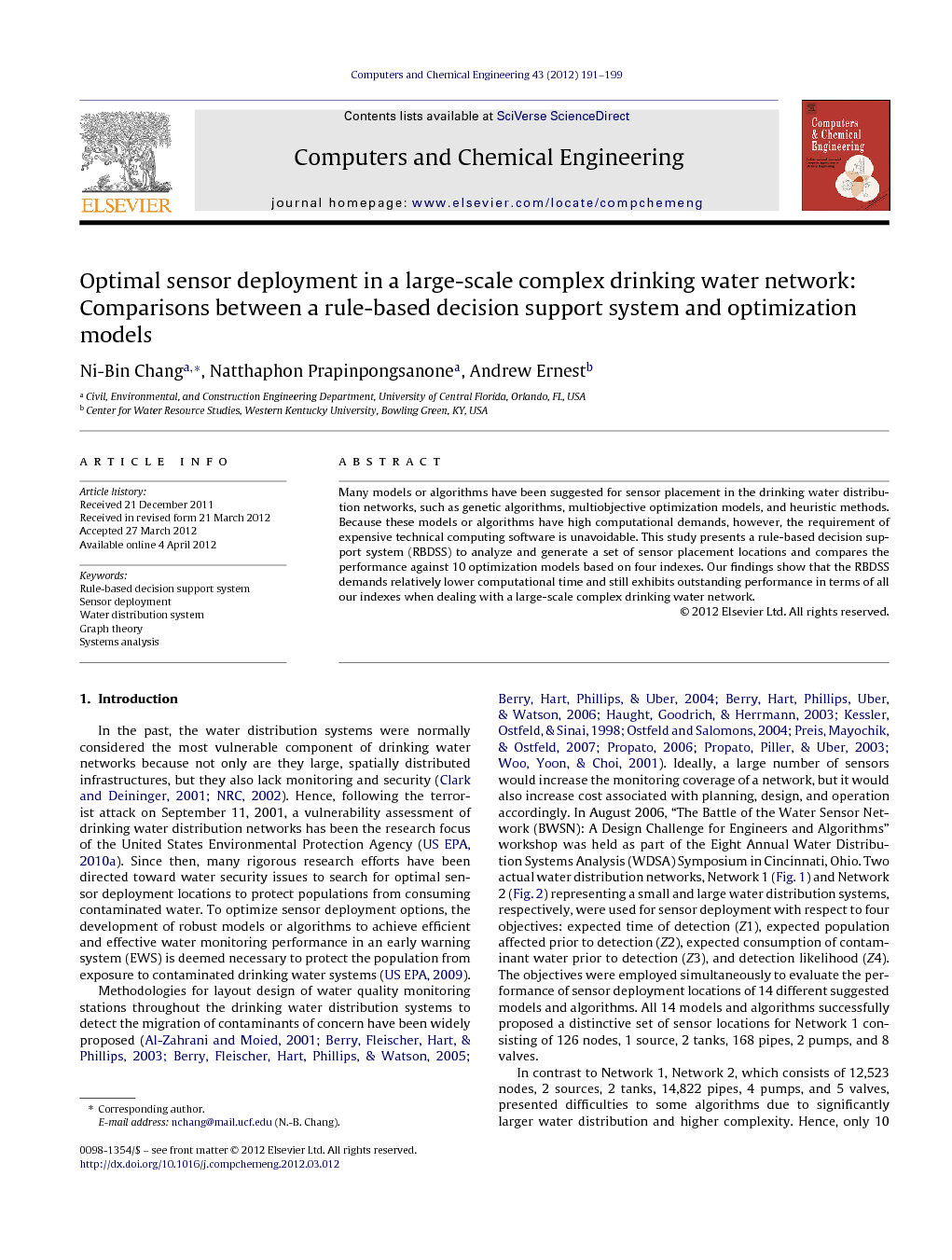 Many models or algorithms have been suggested for sensor placement in the drinking water distribution networks, such as genetic algorithms, multiobjective optimization models, and heuristic methods. Because these models or algorithms have high computational demands, however, the requirement of expensive technical computing software is unavoidable. This study presents a rule-based decision support system (RBDSS) to analyze and generate a set of sensor placement locations and compares the performance against 10 optimization models based on four indexes. Our findings show that the RBDSS demands relatively lower computational time and still exhibits outstanding performance in terms of all our indexes when dealing with a large-scale complex drinking water network.

In the past, the water distribution systems were normally considered the most vulnerable component of drinking water networks because not only are they large, spatially distributed infrastructures, but they also lack monitoring and security (Clark and Deininger, 2001 and NRC, 2002). Hence, following the terrorist attack on September 11, 2001, a vulnerability assessment of drinking water distribution networks has been the research focus of the United States Environmental Protection Agency (US EPA, 2010a). Since then, many rigorous research efforts have been directed toward water security issues to search for optimal sensor deployment locations to protect populations from consuming contaminated water. To optimize sensor deployment options, the development of robust models or algorithms to achieve efficient and effective water monitoring performance in an early warning system (EWS) is deemed necessary to protect the population from exposure to contaminated drinking water systems (US EPA, 2009). Methodologies for layout design of water quality monitoring stations throughout the drinking water distribution systems to detect the migration of contaminants of concern have been widely proposed (Al-Zahrani and Moied, 2001, Berry et al., 2003, Berry et al., 2005, Berry et al., 2004, Berry et al., 2006, Haught et al., 2003, Kessler et al., 1998, Ostfeld and Salomons, 2004, Preis et al., 2007, Propato, 2006, Propato et al., 2003 and Woo et al., 2001). Ideally, a large number of sensors would increase the monitoring coverage of a network, but it would also increase cost associated with planning, design, and operation accordingly. In August 2006, “The Battle of the Water Sensor Network (BWSN): A Design Challenge for Engineers and Algorithms” workshop was held as part of the Eight Annual Water Distribution Systems Analysis (WDSA) Symposium in Cincinnati, Ohio. Two actual water distribution networks, Network 1 (Fig. 1) and Network 2 (Fig. 2) representing a small and large water distribution systems, respectively, were used for sensor deployment with respect to four objectives: expected time of detection (Z1), expected population affected prior to detection (Z2), expected consumption of contaminant water prior to detection (Z3), and detection likelihood (Z4). The objectives were employed simultaneously to evaluate the performance of sensor deployment locations of 14 different suggested models and algorithms. All 14 models and algorithms successfully proposed a distinctive set of sensor locations for Network 1 consisting of 126 nodes, 1 source, 2 tanks, 168 pipes, 2 pumps, and 8 valves.In contrast to Network 1, Network 2, which consists of 12,523 nodes, 2 sources, 2 tanks, 14,822 pipes, 4 pumps, and 5 valves, presented difficulties to some algorithms due to significantly larger water distribution and higher complexity. Hence, only 10 models and algorithms were proposed for Network 2. The primary difficulty in analyzing a large-scale network is the limitation of available computing resources (e.g., available memory); computer memory and computational time requirements remain the main obstacles (Aral, Guan, & Marslia, 2010). Although many studies have demonstrated the ability to solve a large-scale network, their approaches can be easily utilized by the potential end-users in drinking water industry (Hart and Murray, 2010). For instance, mixed-integer linear programing (MILP) models cannot be applied to Network 2 in their practices because they have higher uncertainty due to a longer run-times and cannot process larger water distribution networks due to the limitation of “NP complete” issues that imply an extremely heavy computational loading would appear as the size of larger water distribution networks goes bigger (Propato and Piller, 2006). In addition, the application of Network 2 was not well addressed by using a multiobjective evaluation with a predator–prey model; the model must be adapted to a new scenario to overcome potential obstacles regarding specialization, disengagement, or cycling during coevolution (Gueli, 2006). The rule-based decision support system has been developed and applied in small water distribution networks, such as Network 1 in BWSN, to generate a set of candidacy nodes for sensor placement based on flow rate distribution, the density of node location, and contamination concentration distribution of a specific simulated event. Given the difficulties encountered by other proposed algorithms and models when focusing on large-scale complex systems such as Network 2, the objective of this study is to demonstrate the robustness, effectiveness, and efficacy of a rule-based decision support system (RBDSS) algorithm in dealing with a large-scale complex water distribution system for sensor deployment. To achieve this goal, RBDSS was applied to analyze Network 2 using a finite number of 20 sensors (Case N2A20), in BWSN, to generate a set of sensor deployment locations. The outcomes were then compared against the performance of sensor deployment locations via the BWSN-software utilities in relation to the other 10 models and algorithms based on the four objectives, Z1–Z4.

Sensor placement issues in drinking water distribution systems have been the focus in many water quality monitoring studies due to the vulnerability of these networks to malicious terrorist attack or epidemiological incidences that can potentially risk consumers’ health. At a practical level, general guidelines for sensor placement must be set to draw a final design. Four indexes, including the expected time of detection (Z1), the expected population affected prior to detection (Z2), the expected consumption of contaminant water prior to detection (Z3), and the detection likelihood (Z4), were used in this assessment to test 11 models and algorithms, including RBDSS in the present study. The performance of RBDSS proved competitive, outperforming other proposed models across all four criteria. Our case study in a large-scale network shows that RBDSS can generate a set of sensor deployment locations with priority under minimal computational burden. More important, a significant advantage of RBDSS over the other algorithms and models is that RBDSS generates only one set of sensor deployment locations that indicate an optimal solution; therefore, users do not have to determine whether the solution is an optimal or not, and the algorithm can be carried out using inexpensive software packages such as EXCEL. Using Network 2 as an example in our case study further illuminates the philosophy that there is no dominant solution for sensor deployment because the trade-off among four objectives cannot be easily achieved. Therefore, if general guidelines cannot be set, engineers would find it difficult to justify whether the solution produced is the most feasible. With the advancement of RBDSS, the final choice is dependent on engineering judgment to value one objective over the others and to select the best solution accordingly. As a result, the justification of priority of four design objectives can be integrated to maximize the security for the civilians. Future work may be directed to add more rules in this RBDSS to extend the application potential.