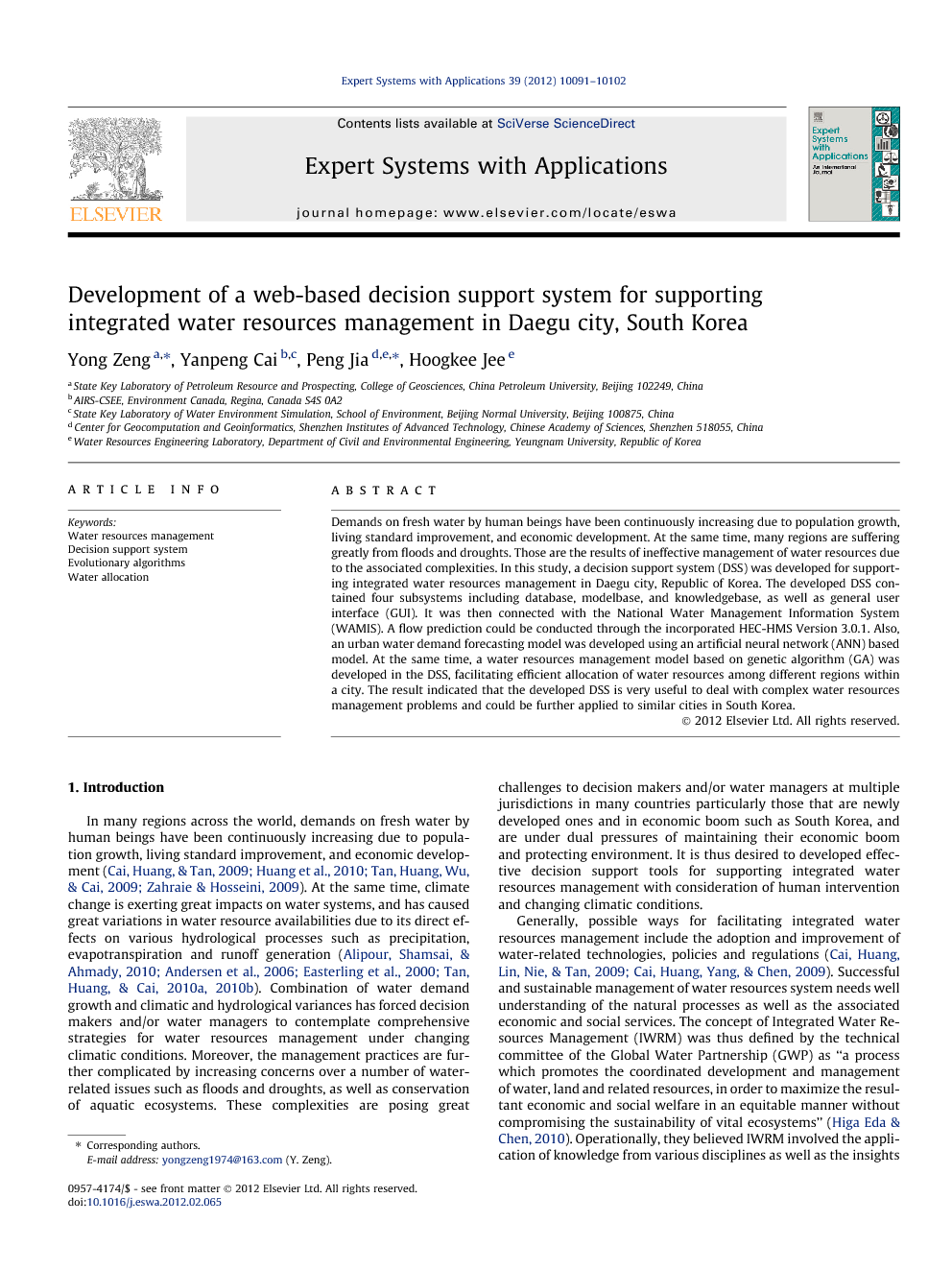 Demands on fresh water by human beings have been continuously increasing due to population growth, living standard improvement, and economic development. At the same time, many regions are suffering greatly from floods and droughts. Those are the results of ineffective management of water resources due to the associated complexities. In this study, a decision support system (DSS) was developed for supporting integrated water resources management in Daegu city, Republic of Korea. The developed DSS contained four subsystems including database, modelbase, and knowledgebase, as well as general user interface (GUI). It was then connected with the National Water Management Information System (WAMIS). A flow prediction could be conducted through the incorporated HEC-HMS Version 3.0.1. Also, an urban water demand forecasting model was developed using an artificial neural network (ANN) based model. At the same time, a water resources management model based on genetic algorithm (GA) was developed in the DSS, facilitating efficient allocation of water resources among different regions within a city. The result indicated that the developed DSS is very useful to deal with complex water resources management problems and could be further applied to similar cities in South Korea.

Water is commonly considered as the basic natural resources and strategically economic resources. The current situation is that water is unevenly distributed in space and time, and the contradiction in the supply and demand of water has become a critical constraint for development, and the further problem is the disasters such as floods and droughts. Based on the current development of information and computer technology, a decision support system was developed for supporting the management of water resource problems in Daegu city. The Database, Modelbase, Knowledgebase and Graphical user interface were mainly discussed and formed the DSS. Technologies including the real time hydrological model, urban water demand forecasting model, and water management model were incorporated into the DSS for assisting in dealing with urban water resource management problems, such as flood early warning and water allocation between stakeholders. Based on ARCGIS Engine, SQL Server 2000 and Web environment, the developed DSS could provide real time forecasted hydrological and hydraulic information, improving decision makers’ capabilities in handling issues related to spatial queries, scenarios analysis and optimal decision-making. With the applications of ANN for water demand forecasting and genetic algorithm for water resources allocation, the system could deal with the problems of complex and nonlinear water resources system, both in water demand and optimal water allocation aspects. The successful application of the DSS in Daegu city demonstrated that it is a significant move towards a fully integrated water-environment decision support system for the South Korea.