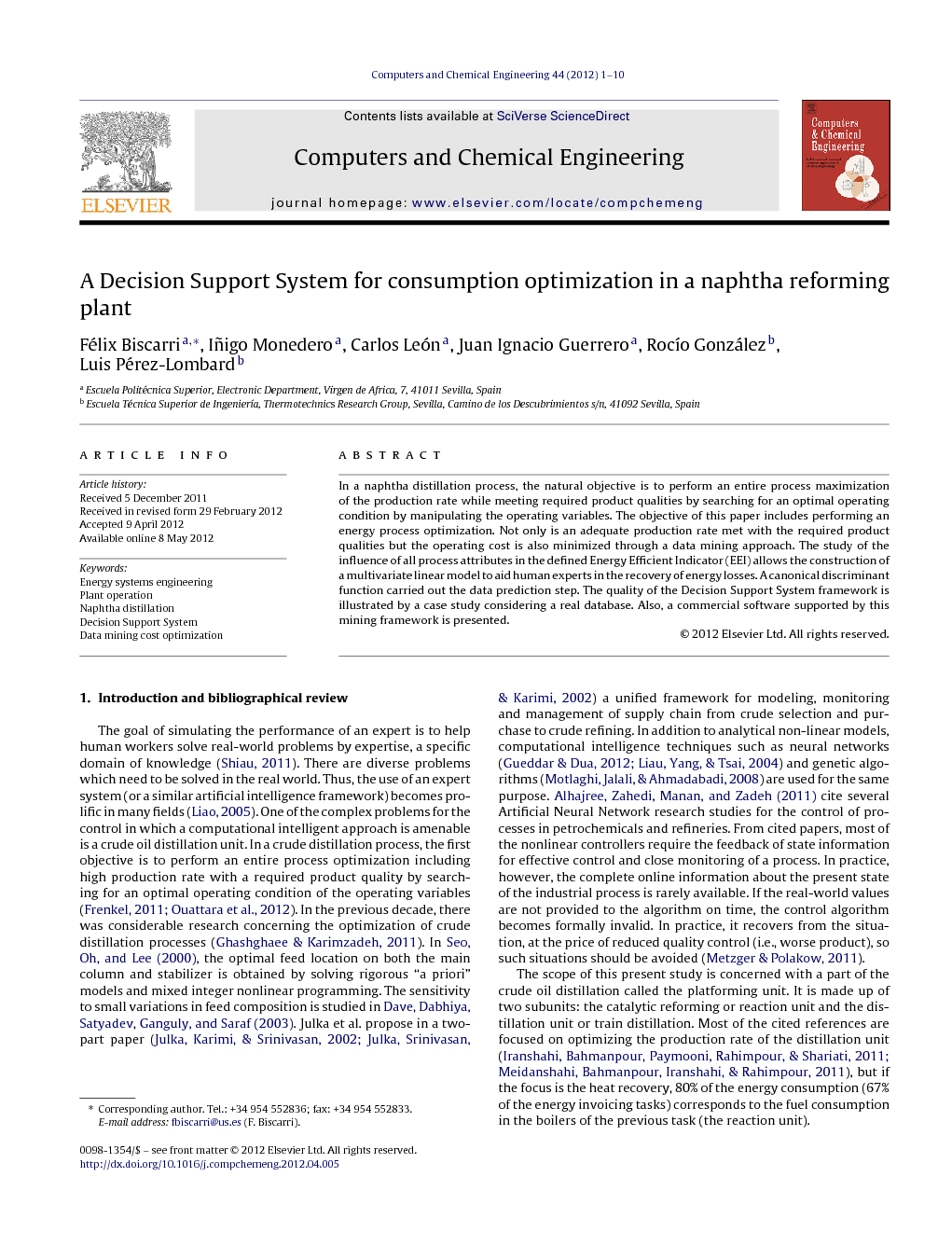 In a naphtha distillation process, the natural objective is to perform an entire process maximization of the production rate while meeting required product qualities by searching for an optimal operating condition by manipulating the operating variables. The objective of this paper includes performing an energy process optimization. Not only is an adequate production rate met with the required product qualities but the operating cost is also minimized through a data mining approach. The study of the influence of all process attributes in the defined Energy Efficient Indicator (EEI) allows the construction of a multivariate linear model to aid human experts in the recovery of energy losses. A canonical discriminant function carried out the data prediction step. The quality of the Decision Support System framework is illustrated by a case study considering a real database. Also, a commercial software supported by this mining framework is presented.

This paper discusses the main attributes of an aromatic distillation unit in petrochemical industries to suggest a practical way for consumption optimization. A biographical review has been made, and a new framework is presented to find relevant knowledge about the particular characteristics of the distillation process and to describe the main features available. The authors present an innovative data mining framework that uses the historical plant database to make the most of the expert knowledge. Every operation points used are points recorded in a historical database that presents an optimization program of the plant features, but not in the consumption optimization sense. The mining process creates a characterization of the plant operation points based on the most relevant attributes previously selected. This classification can be used in two ways: to assign new points to existing classes (very high, high, low or very low EEIREACTION−SDBIN value) and to move the present operation point. The main contribution of this paper is to suggest how to move from the present operation point to a close historical point that could improve energy efficiency. Both points, present and proposed points, carry out the industrial objective: high production rate with required product quality. The second one searches an optimal consumption as well. The human expert would choose between several optimal points once the industrial and economical constraints are fixed. This mining process optimization could be repeated just to achieve the minimum value of the energy efficiency indicator (EEI). In this sense, as a new contribution of this paper, the real industrial process constraints to the attribute values are considered “a posteriori”. The model highlights the special importance of the use of real constraints. The quality of this framework is illustrated by a case study that uses a real database. The framework presented in this paper is now in the testing phase. The previous results obtained were satisfactory considering the limitation of the available database. A rise in the energy efficiency from 35% to 45% is significantly improved from the previous company process. Also, the required product quality is maintained. As previously stated, as future research the human expert knowledge will be collected into an artificial intelligence-based expert system in order to fully automatize the mining framework.