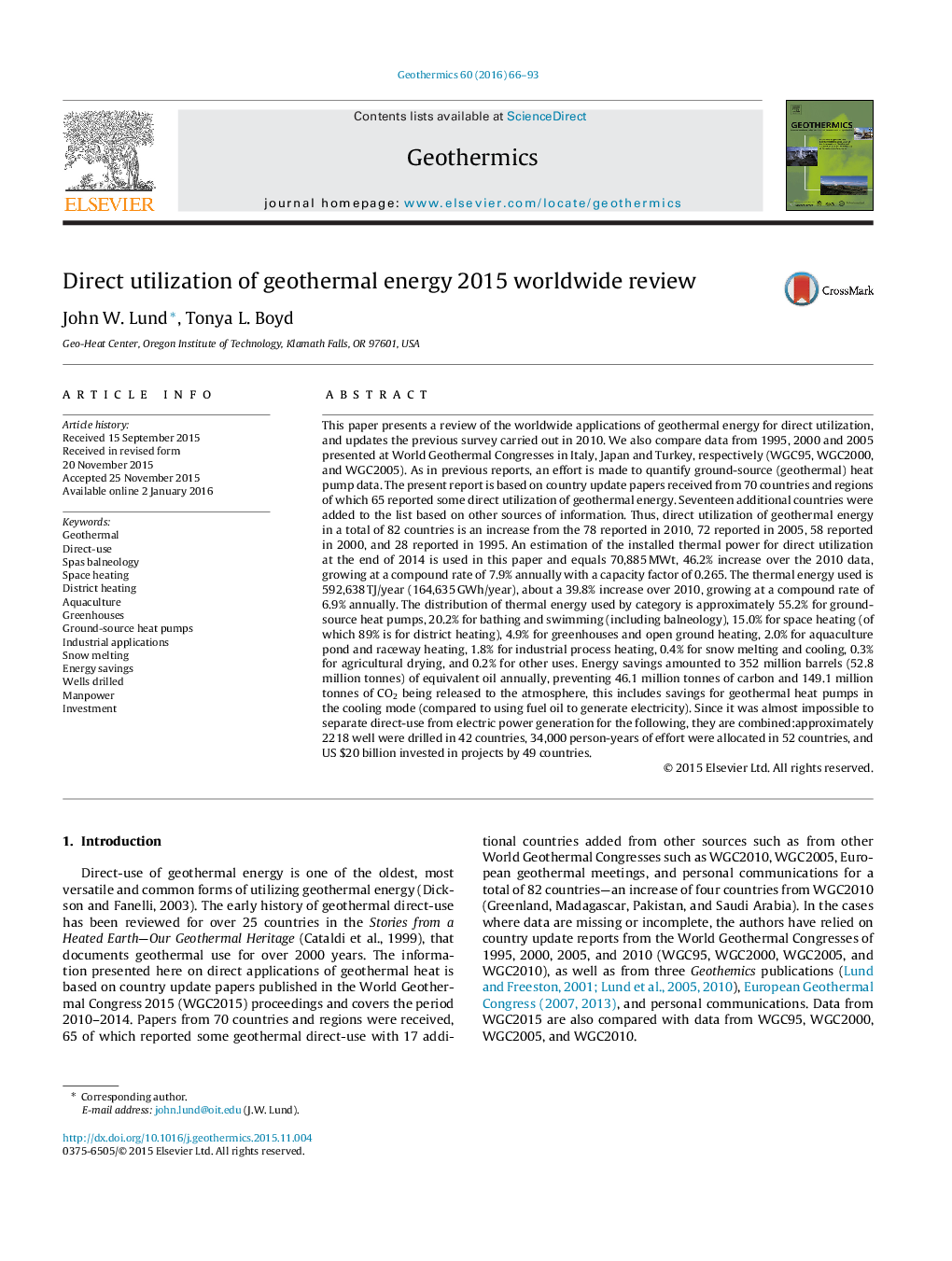 This paper presents a review of the worldwide applications of geothermal energy for direct utilization, and updates the previous survey carried out in 2010. We also compare data from 1995, 2000 and 2005 presented at World Geothermal Congresses in Italy, Japan and Turkey, respectively (WGC95, WGC2000, and WGC2005). As in previous reports, an effort is made to quantify ground-source (geothermal) heat pump data. The present report is based on country update papers received from 70 countries and regions of which 65 reported some direct utilization of geothermal energy. Seventeen additional countries were added to the list based on other sources of information. Thus, direct utilization of geothermal energy in a total of 82 countries is an increase from the 78 reported in 2010, 72 reported in 2005, 58 reported in 2000, and 28 reported in 1995. An estimation of the installed thermal power for direct utilization at the end of 2014 is used in this paper and equals 70,885 MWt, 46.2% increase over the 2010 data, growing at a compound rate of 7.9% annually with a capacity factor of 0.265. The thermal energy used is 592,638 TJ/year (164,635 GWh/year), about a 39.8% increase over 2010, growing at a compound rate of 6.9% annually. The distribution of thermal energy used by category is approximately 55.2% for ground-source heat pumps, 20.2% for bathing and swimming (including balneology), 15.0% for space heating (of which 89% is for district heating), 4.9% for greenhouses and open ground heating, 2.0% for aquaculture pond and raceway heating, 1.8% for industrial process heating, 0.4% for snow melting and cooling, 0.3% for agricultural drying, and 0.2% for other uses. Energy savings amounted to 352 million barrels (52.8 million tonnes) of equivalent oil annually, preventing 46.1 million tonnes of carbon and 149.1 million tonnes of CO2 being released to the atmosphere, this includes savings for geothermal heat pumps in the cooling mode (compared to using fuel oil to generate electricity). Since it was almost impossible to separate direct-use from electric power generation for the following, they are combined:approximately 2218 well were drilled in 42 countries, 34,000 person-years of effort were allocated in 52 countries, and US $20 billion invested in projects by 49 countries.