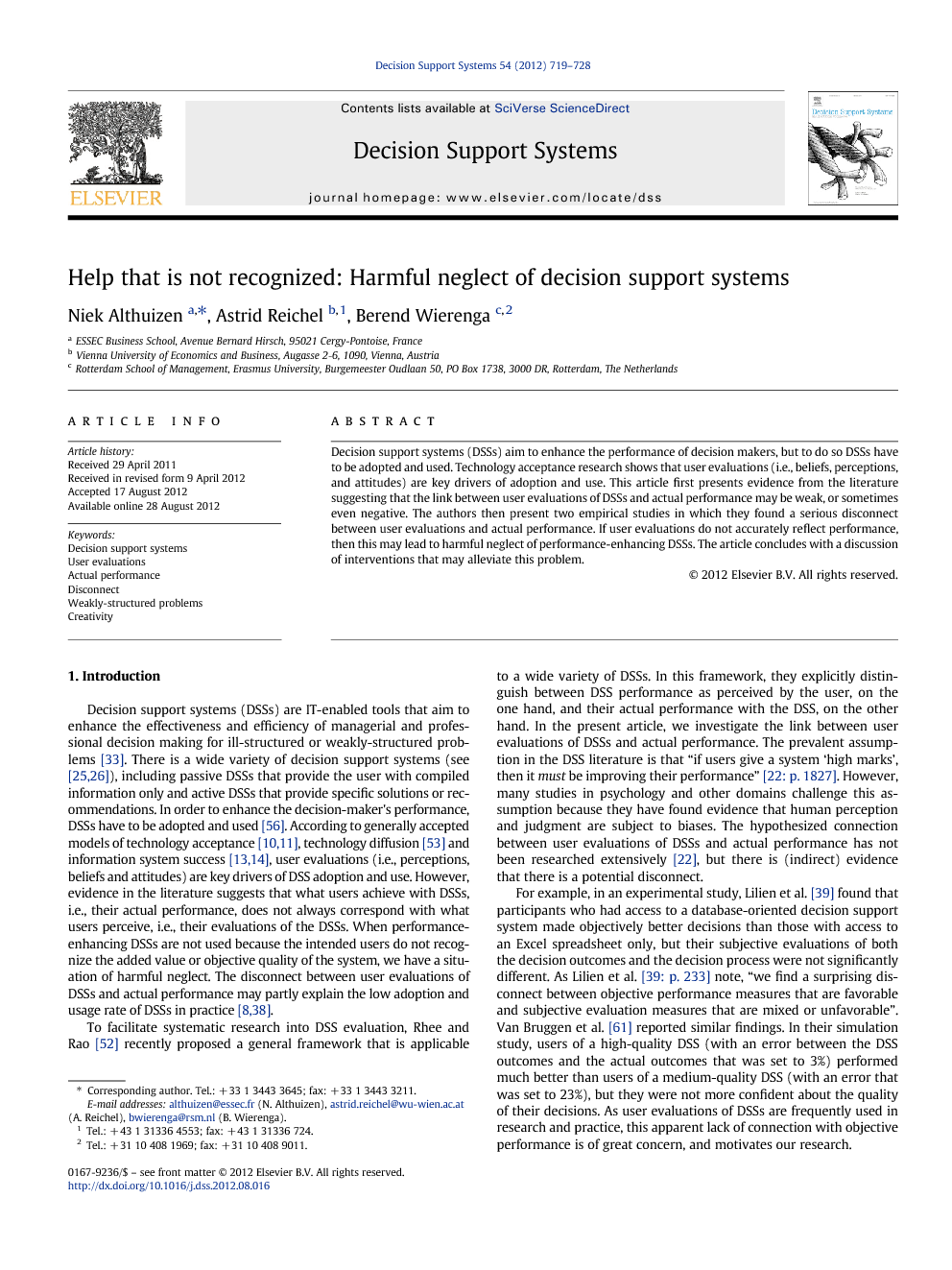 Decision support systems (DSSs) are IT-enabled tools that aim to enhance the effectiveness and efficiency of managerial and professional decision making for ill-structured or weakly-structured problems [33]. There is a wide variety of decision support systems (see [25] and [26]), including passive DSSs that provide the user with compiled information only and active DSSs that provide specific solutions or recommendations. In order to enhance the decision-maker's performance, DSSs have to be adopted and used [56]. According to generally accepted models of technology acceptance [10] and [11], technology diffusion [53] and information system success [13] and [14], user evaluations (i.e., perceptions, beliefs and attitudes) are key drivers of DSS adoption and use. However, evidence in the literature suggests that what users achieve with DSSs, i.e., their actual performance, does not always correspond with what users perceive, i.e., their evaluations of the DSSs. When performance-enhancing DSSs are not used because the intended users do not recognize the added value or objective quality of the system, we have a situation of harmful neglect. The disconnect between user evaluations of DSSs and actual performance may partly explain the low adoption and usage rate of DSSs in practice [8] and [38]. To facilitate systematic research into DSS evaluation, Rhee and Rao [52] recently proposed a general framework that is applicable to a wide variety of DSSs. In this framework, they explicitly distinguish between DSS performance as perceived by the user, on the one hand, and their actual performance with the DSS, on the other hand. In the present article, we investigate the link between user evaluations of DSSs and actual performance. The prevalent assumption in the DSS literature is that “if users give a system ‘high marks’, then it must be improving their performance” [22: p. 1827]. However, many studies in psychology and other domains challenge this assumption because they have found evidence that human perception and judgment are subject to biases. The hypothesized connection between user evaluations of DSSs and actual performance has not been researched extensively [22], but there is (indirect) evidence that there is a potential disconnect. For example, in an experimental study, Lilien et al. [39] found that participants who had access to a database-oriented decision support system made objectively better decisions than those with access to an Excel spreadsheet only, but their subjective evaluations of both the decision outcomes and the decision process were not significantly different. As Lilien et al. [39: p. 233] note, “we find a surprising disconnect between objective performance measures that are favorable and subjective evaluation measures that are mixed or unfavorable”. Van Bruggen et al. [61] reported similar findings. In their simulation study, users of a high-quality DSS (with an error between the DSS outcomes and the actual outcomes that was set to 3%) performed much better than users of a medium-quality DSS (with an error that was set to 23%), but they were not more confident about the quality of their decisions. As user evaluations of DSSs are frequently used in research and practice, this apparent lack of connection with objective performance is of great concern, and motivates our research. The remainder of this article is organized as follows. We first discuss possible reasons for a disconnect between user evaluations of DSSs and actual performance and then present existing evidence from the literature. Next, we present our research framework and discuss two empirical studies in which we investigated the link between user evaluations of DSSs and actual performance. Both studies show a clear discrepancy between what users perceive and what they actually achieve with DSSs. This should be a reason for concern to both researchers and practitioners, as it may lead to wrong decisions regarding the adoption and use of DSSs. A neglect of performance-enhancing DSSs, for example, may hamper a company's competitive position and should be avoided. The article concludes with a discussion of interventions that can help users form evaluative judgments of DSSs that are more accurate.