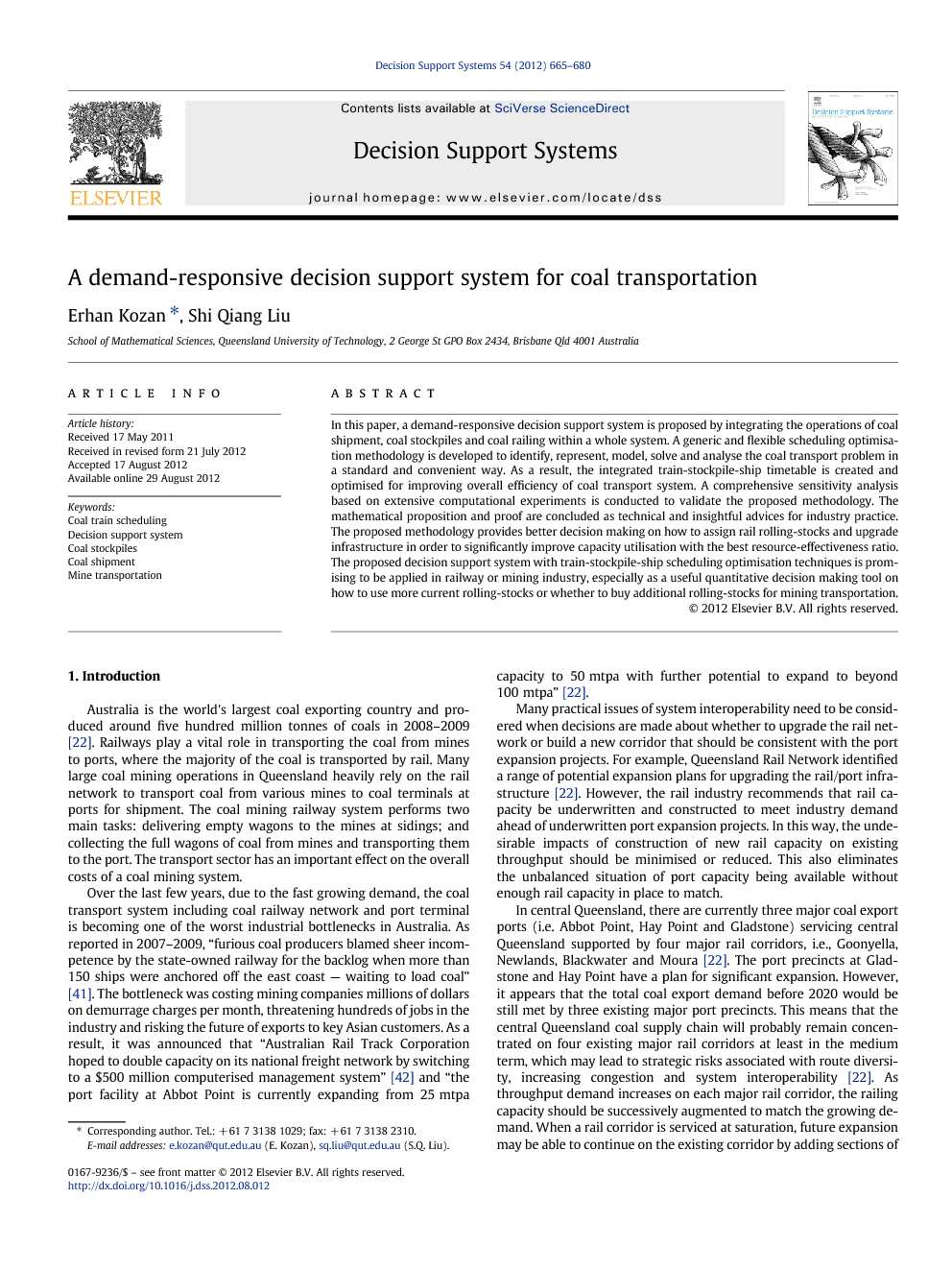 In this paper, a demand-responsive decision support system is proposed by integrating the operations of coal shipment, coal stockpiles and coal railing within a whole system. A generic and flexible scheduling optimisation methodology is developed to identify, represent, model, solve and analyse the coal transport problem in a standard and convenient way. As a result, the integrated train-stockpile-ship timetable is created and optimised for improving overall efficiency of coal transport system. A comprehensive sensitivity analysis based on extensive computational experiments is conducted to validate the proposed methodology. The mathematical proposition and proof are concluded as technical and insightful advices for industry practice. The proposed methodology provides better decision making on how to assign rail rolling-stocks and upgrade infrastructure in order to significantly improve capacity utilisation with the best resource-effectiveness ratio. The proposed decision support system with train-stockpile-ship scheduling optimisation techniques is promising to be applied in railway or mining industry, especially as a useful quantitative decision making tool on how to use more current rolling-stocks or whether to buy additional rolling-stocks for mining transportation.

The coal railway industry is a capital intensive industry with large investment in infrastructure, equipment and employees. Operating a railway requires very complex decision-making processes due to the need to schedule several hundred roundtrips over thousands of kilometres distances. Even a small percentage of improvement in the efficiency of the overall operation may bring significant financial return. With the comprehensive sensitivity analysis, the proposed methodology is promising to provide the meaningful insights and quantitative advices on how to upgrade infrastructure and equipment, increase the railing capacity and improve the utilisation rate of coal rail network. As a result, the contribution of the proposed decision support system with train-stockpile-ship scheduling optimisation techniques to industry practice would be enormous. The primary aim of this paper is to provide new modelling and solution techniques in the areas of strategic planning on coal shipment and operational scheduling on coal railing by developing an integrated demand-responsive decision support system. To this end, the operational capabilities in coal rail network will ultimately determine the performance of overall coal transport system. In a sense, scheduling models and algorithms at the operational level are the most important component of this comprehensive decision support system. Alternative implementations of the proposed methodology have been investigated and alternative cases have been performed with detailed sensitivity analysis. The development of such an intelligent coal transport system may bring many benefits towards achievements of some long-term goals including: i) determining the more efficient feasible operational coal train schedules; ii) increasing the railing capacity to the full potential so that after an event the system can still catch up and meet contract tonnages in a demand-responsive time window; iii) preparing the latent capacity to meet even the highest forecast tonnage demands; iv) offering accurate and quantitative advices on relatively balanced port and rail capacity expansion. As for future scope of this research, the proposed methodology will be transferred and applied to other mining industries such as iron ore instead of coal mining industry. In addition, the proposed methodology will be extended to take a different perspective on robust and reactive scheduling by immunising deterministic train scheduling models against infeasibility caused by stochastic perturbations in model parameters and various dynamic factors due to the fact that unexpected events or accidents often occur in real-life train scheduling environments. More research works are needed to analyse and adopt more realistic constraints and specified requirements such as delay costs, stockpile rehandling, blending, shipment due windows, maintenance activities, etc. These future research directions will have the potential to lead to considerable theoretical and practical advancements in the fields of planning and scheduling, transportation and mining optimisation. As a result, more significant gains in optimal cost-effectiveness can be achieved for railway and mining industries.