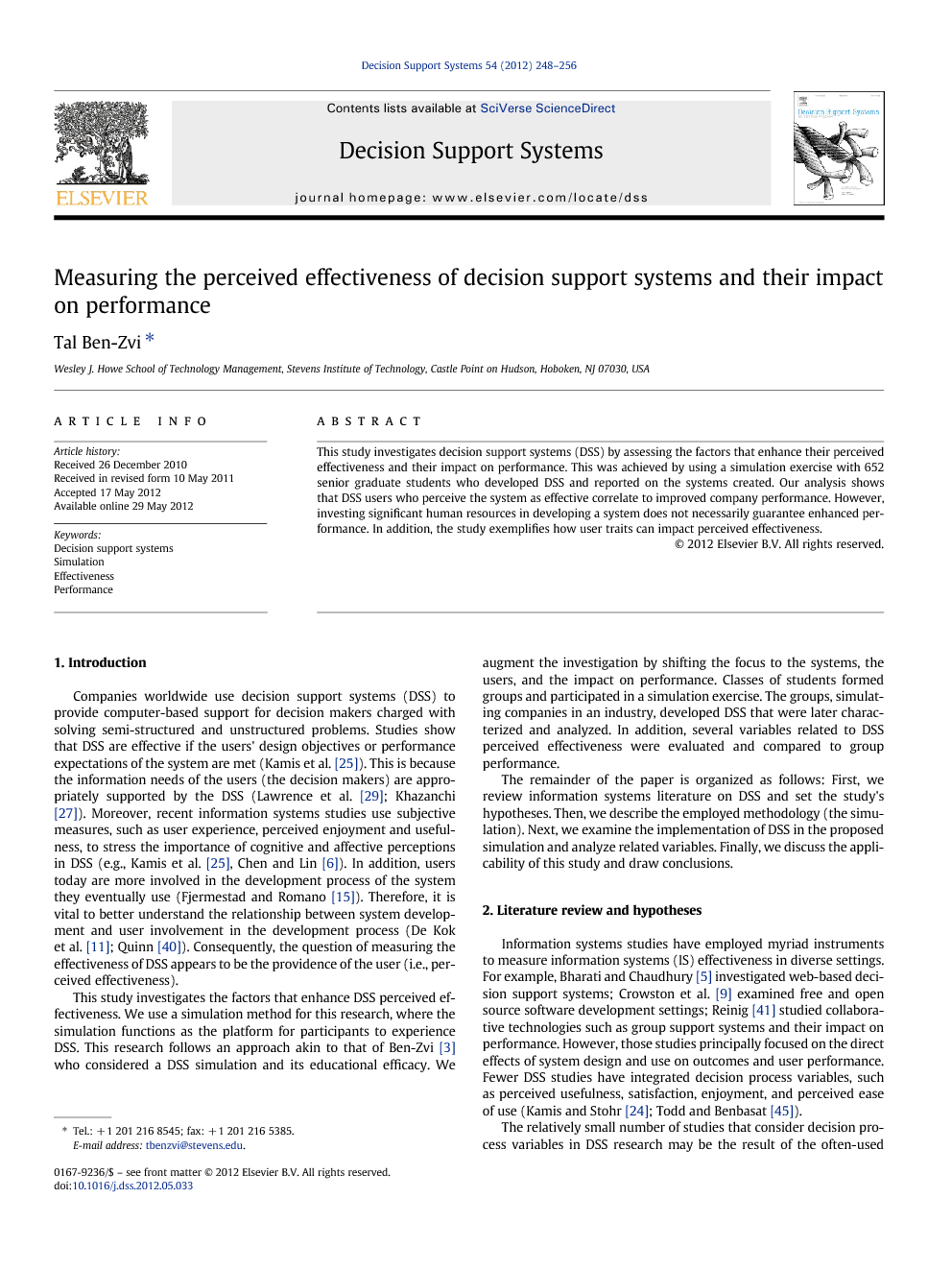 This study investigates decision support systems (DSS) by assessing the factors that enhance their perceived effectiveness and their impact on performance. This was achieved by using a simulation exercise with 652 senior graduate students who developed DSS and reported on the systems created. Our analysis shows that DSS users who perceive the system as effective correlate to improved company performance. However, investing significant human resources in developing a system does not necessarily guarantee enhanced performance. In addition, the study exemplifies how user traits can impact perceived effectiveness.

Companies worldwide use decision support systems (DSS) to provide computer-based support for decision makers charged with solving semi-structured and unstructured problems. Studies show that DSS are effective if the users' design objectives or performance expectations of the system are met (Kamis et al. [25]). This is because the information needs of the users (the decision makers) are appropriately supported by the DSS (Lawrence et al. [29]; Khazanchi [27]). Moreover, recent information systems studies use subjective measures, such as user experience, perceived enjoyment and usefulness, to stress the importance of cognitive and affective perceptions in DSS (e.g., Kamis et al. [25], Chen and Lin [6]). In addition, users today are more involved in the development process of the system they eventually use (Fjermestad and Romano [15]). Therefore, it is vital to better understand the relationship between system development and user involvement in the development process (De Kok et al. [11]; Quinn [40]). Consequently, the question of measuring the effectiveness of DSS appears to be the providence of the user (i.e., perceived effectiveness). This study investigates the factors that enhance DSS perceived effectiveness. We use a simulation method for this research, where the simulation functions as the platform for participants to experience DSS. This research follows an approach akin to that of Ben-Zvi [3] who considered a DSS simulation and its educational efficacy. We augment the investigation by shifting the focus to the systems, the users, and the impact on performance. Classes of students formed groups and participated in a simulation exercise. The groups, simulating companies in an industry, developed DSS that were later characterized and analyzed. In addition, several variables related to DSS perceived effectiveness were evaluated and compared to group performance. The remainder of the paper is organized as follows: First, we review information systems literature on DSS and set the study's hypotheses. Then, we describe the employed methodology (the simulation). Next, we examine the implementation of DSS in the proposed simulation and analyze related variables. Finally, we discuss the applicability of this study and draw conclusions.

This study examined simulated companies. Although the general environment that each team functioned within was similar, the companies became differentiated. That is, each company assumed a considerably different strategy, different operating decisions, and a different approach to DSS. And leaving DSS development decisions to the companies resulted in a variety of applications and a wide array of models, programs and modes of operation. It appears that these companies reflect most real life business approaches to DSS. In addition, this study tested three hypotheses. For the first two hypotheses, we obtained mixed results: while some factors, such as perceived usefulness, perceived contribution of the system and user satisfaction, promote DSS perceived effectiveness and company performance, other factors, such as familiarity with the system, system use and participation in defining the system do support this notion. The third hypothesis was confirmed, as perceived effectiveness, user satisfaction and company performance follow an inverted U-shaped curve as system complexity increases. These results replicate a number of previous findings. More generally, our experience suggests that the efficacy of simulations as platforms for implementing DSS is twofold. First, participants practice the art of decision-making; participants are excited, motivated and strive to make better decisions; they become actively involved in the simulated decision-making process and in the development of MIS and DSS of their choice. Second, because the simulation is very practical, the participants themselves frame the relationship between the decision-making processes, the designed information systems and the outcomes of their use. This exemplifies how decision-making is more effective using DSS and also provides an integrative view of some of the tasks and practical uses of DSS. Furthermore, the results we obtained have implications for both researchers and practitioners. For researchers, this study demonstrates the importance of including subjective measures when examining DSS effectiveness. Nevertheless, researchers need to be cautious about using different measures of system effectiveness and performance. While some measures are positively associated with system perceived effectiveness or company performance, other factors do not present a direct impact. In addition, researchers should clearly specify what the exact nature of the measured variables is. System use and system perceived effectiveness may exhibit entirely different phenomena. The implications for practitioners are also important. First, we have shown an inverted U-shaped relationship between complexity and performance, signifying that multifaceted systems do not guarantee a better outcome. Therefore, as perceived effectiveness becomes increasingly important, more and more businesses should concentrate on that aspect of their IS. And employing a simulation method may provide a strategic opportunity to seamlessly transition the study of DSS from theoretical concepts and research aspects to more practical and relevant contexts. That is, the simulation encourages students to apply scientific concepts learnt through formal lessons to create a system that supports problem solving activities using the available data. The ultimate result will be more effective MIS and DSS in the real world. Second, practitioners need to realize that a lack of strong behavioral indications of system familiarity, participation in defining a system or system use (either own use or use by colleagues) may not necessarily result in a negative outcome. User involvement in a system development or design process may signify a better technical or operational fit (e.g., a better use of technology) but as this study showed, this does not necessarily suggest enhanced performance. In fact, there may very well be other factors that impact performance. By better understanding the perceived measures of DSS effectiveness and company performance, practitioners could interpret data pertaining to those measures more accurately. System analysts and system developers must take this result into account while developing or designing an MIS or DSS and involving potential users in the process. This study has limitations that should be noted. Most companies in this simulation developed a spreadsheet-based DSS. Some may regard spreadsheets as over simplistic DSS. We believe, however, that presently, spreadsheets are popular and sufficient tools to create extremely powerful and practical DSS. Moreover, spreadsheets offer some substantial advantages: individuals, not necessarily IS oriented, are familiar with spreadsheet tools, so they can quickly employ them for the development of a DSS. Spreadsheets also allow a dynamic data updating and facilitate data visualization. Also, modern spreadsheet programs contain powerful data analysis tools (e.g., Analysis ToolPak in Excel); more than 60% of all participating teams incorporated data analysis tools into their DSS. However, while feedback from participants is favorable and the simulation is sufficiently complex to provide challenges and a realistic simulation of decision making, no simulation can encompass all aspects of information systems. Because the simulation decisions are more simplistic than those of the real world, the DSS required to support the decisions are less robust than those in reality. Therefore, the generality and the application of the findings should be further explored by subsequent research. That is, there is a need to determine how simulations, as controlled laboratories, can be augmented to study the more complex, dynamic aspects of the DSS domain. Another limitation is that the usage measures were self-reported as opposed to objectively measured. It is not clear whether the self-reports reflect actual behavior of system users in the real-world. Future research can examine the same constructs using objective measures. Coupled with the results of this study, those measures could establish an improved assessment for DSS perceived effectiveness and DSS impact on company performance.