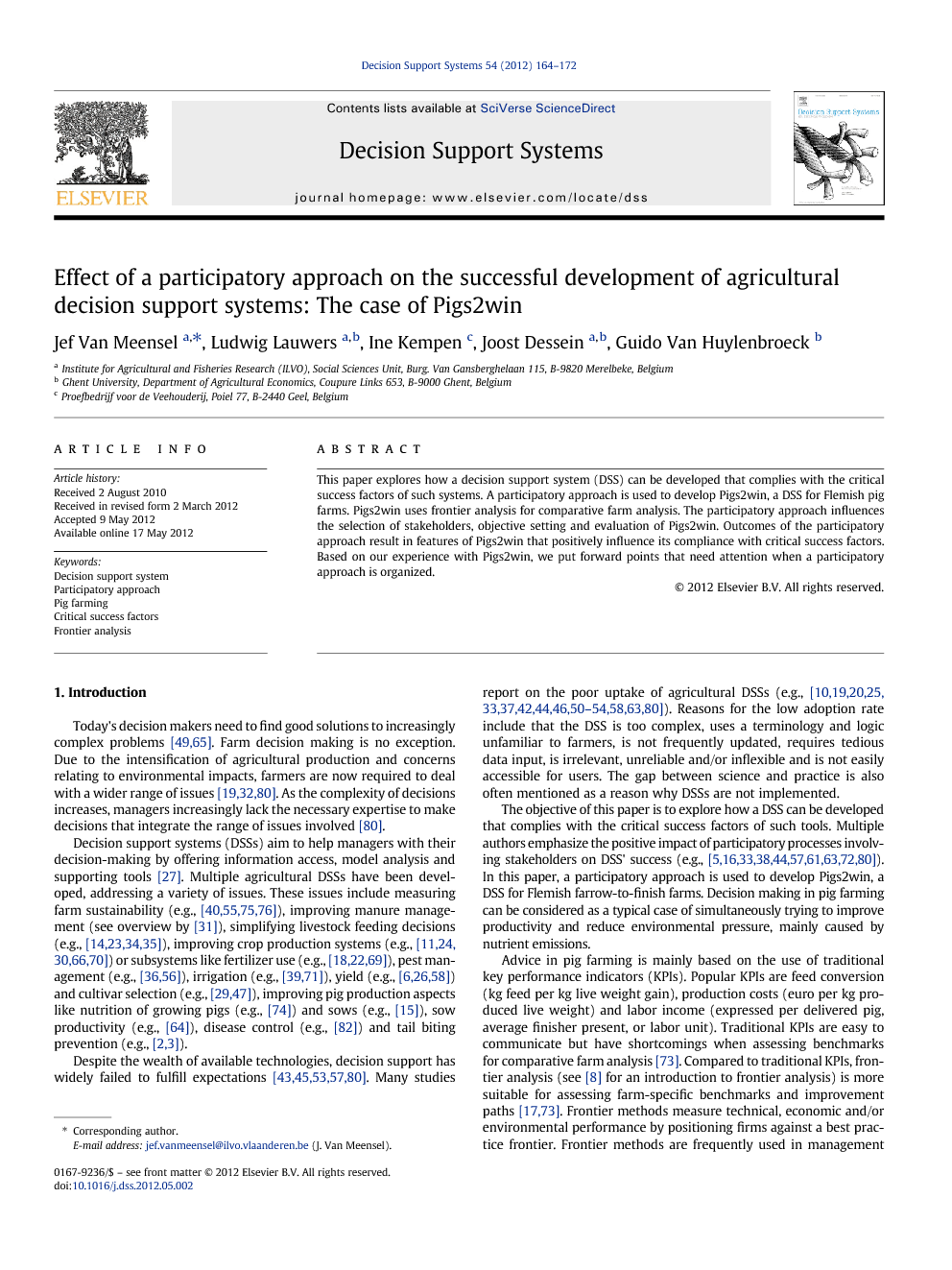 Today's decision makers need to find good solutions to increasingly complex problems [49] and [65]. Farm decision making is no exception. Due to the intensification of agricultural production and concerns relating to environmental impacts, farmers are now required to deal with a wider range of issues [19], [32] and [80]. As the complexity of decisions increases, managers increasingly lack the necessary expertise to make decisions that integrate the range of issues involved [80]. Decision support systems (DSSs) aim to help managers with their decision-making by offering information access, model analysis and supporting tools [27]. Multiple agricultural DSSs have been developed, addressing a variety of issues. These issues include measuring farm sustainability (e.g., [40], [55], [75] and [76]), improving manure management (see overview by [31]), simplifying livestock feeding decisions (e.g., [14], [23], [34] and [35]), improving crop production systems (e.g., [11], [24], [30], [66] and [70]) or subsystems like fertilizer use (e.g., [18], [22] and [69]), pest management (e.g., [36] and [56]), irrigation (e.g., [39] and [71]), yield (e.g., [6], [26] and [58]) and cultivar selection (e.g., [29] and [47]), improving pig production aspects like nutrition of growing pigs (e.g., [74]) and sows (e.g., [15]), sow productivity (e.g., [64]), disease control (e.g., [82]) and tail biting prevention (e.g., [2] and [3]). Despite the wealth of available technologies, decision support has widely failed to fulfill expectations [43], [45], [53], [57] and [80]. Many studies report on the poor uptake of agricultural DSSs (e.g., [10], [19], [20], [25], [33], [37], [42], [44], [46], [50], [51], [52], [53], [54], [58], [63] and [80]). Reasons for the low adoption rate include that the DSS is too complex, uses a terminology and logic unfamiliar to farmers, is not frequently updated, requires tedious data input, is irrelevant, unreliable and/or inflexible and is not easily accessible for users. The gap between science and practice is also often mentioned as a reason why DSSs are not implemented. The objective of this paper is to explore how a DSS can be developed that complies with the critical success factors of such tools. Multiple authors emphasize the positive impact of participatory processes involving stakeholders on DSS' success (e.g., [5], [16], [33], [38], [44], [57], [61], [63], [72] and [80]). In this paper, a participatory approach is used to develop Pigs2win, a DSS for Flemish farrow-to-finish farms. Decision making in pig farming can be considered as a typical case of simultaneously trying to improve productivity and reduce environmental pressure, mainly caused by nutrient emissions. Advice in pig farming is mainly based on the use of traditional key performance indicators (KPIs). Popular KPIs are feed conversion (kg feed per kg live weight gain), production costs (euro per kg produced live weight) and labor income (expressed per delivered pig, average finisher present, or labor unit). Traditional KPIs are easy to communicate but have shortcomings when assessing benchmarks for comparative farm analysis [73]. Compared to traditional KPIs, frontier analysis (see [8] for an introduction to frontier analysis) is more suitable for assessing farm-specific benchmarks and improvement paths [17] and [73]. Frontier methods measure technical, economic and/or environmental performance by positioning firms against a best practice frontier. Frontier methods are frequently used in management science, but they are currently not used in practice for pig farm advice, mainly because farmers and advisors are not familiar with these methods. A challenge for the participatory approach in this paper is the incorporation of frontier analysis in Pigs2win. The paper is structured as follows: Section 2 puts forward critical success factors of DSSs that can be influenced during the development process. Section 3 presents the participatory approach that is used to design and evaluate Pigs2win. Section 4 describes how the participatory method resulted in features of Pigs2win that comply with the success factors of DSSs. This section also highlights the interference between frontier analysis and success factors. Section 5 concludes and provides advice on organizing a participatory approach for building DSSs.