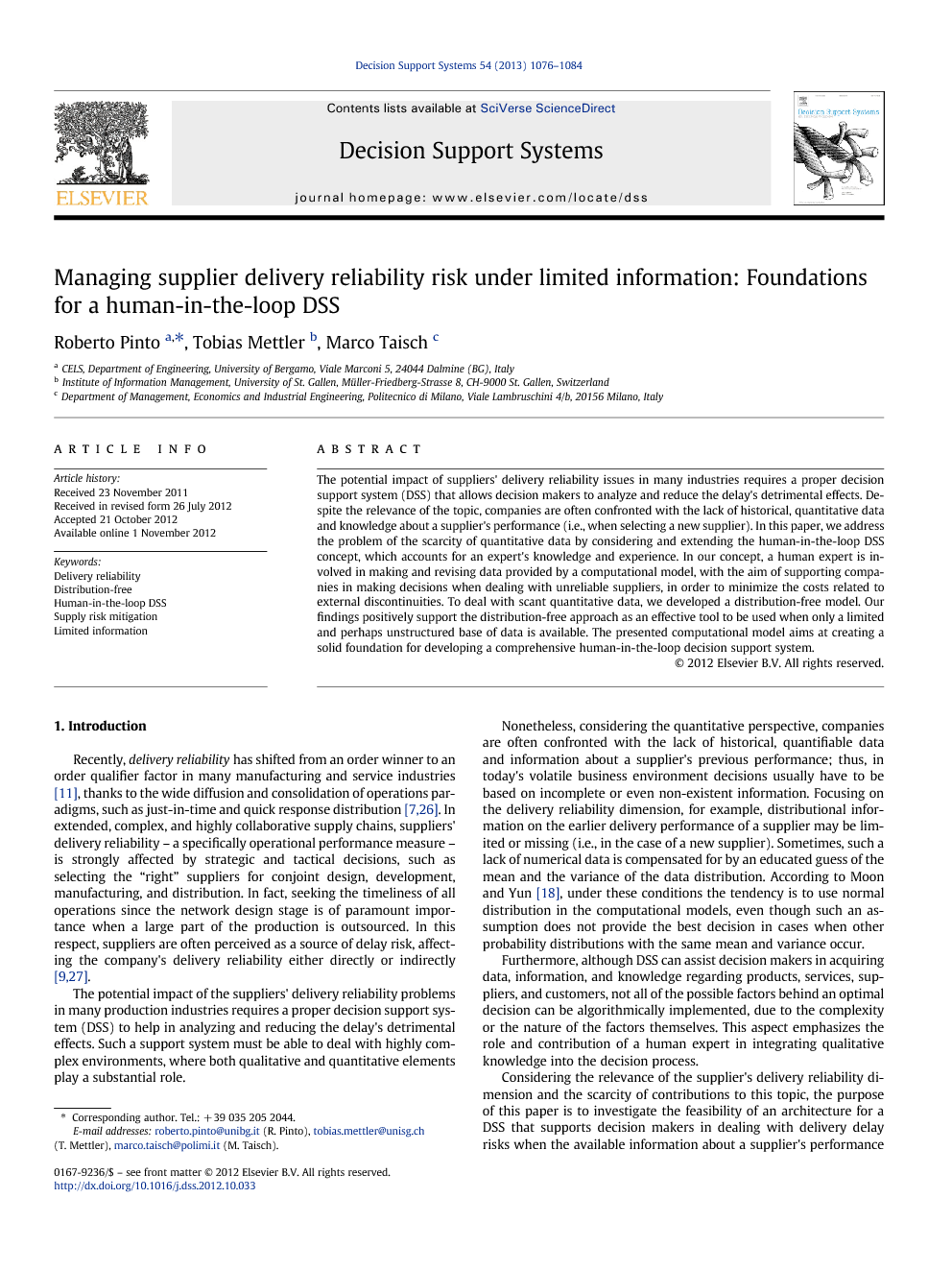 The potential impact of suppliers' delivery reliability issues in many industries requires a proper decision support system (DSS) that allows decision makers to analyze and reduce the delay's detrimental effects. Despite the relevance of the topic, companies are often confronted with the lack of historical, quantitative data and knowledge about a supplier's performance (i.e., when selecting a new supplier). In this paper, we address the problem of the scarcity of quantitative data by considering and extending the human-in-the-loop DSS concept, which accounts for an expert's knowledge and experience. In our concept, a human expert is involved in making and revising data provided by a computational model, with the aim of supporting companies in making decisions when dealing with unreliable suppliers, in order to minimize the costs related to external discontinuities. To deal with scant quantitative data, we developed a distribution-free model. Our findings positively support the distribution-free approach as an effective tool to be used when only a limited and perhaps unstructured base of data is available. The presented computational model aims at creating a solid foundation for developing a comprehensive human-in-the-loop decision support system

Recently, delivery reliability has shifted from an order winner to an order qualifier factor in many manufacturing and service industries [11], thanks to the wide diffusion and consolidation of operations paradigms, such as just-in-time and quick response distribution [7] and [26]. In extended, complex, and highly collaborative supply chains, suppliers' delivery reliability – a specifically operational performance measure – is strongly affected by strategic and tactical decisions, such as selecting the “right” suppliers for conjoint design, development, manufacturing, and distribution. In fact, seeking the timeliness of all operations since the network design stage is of paramount importance when a large part of the production is outsourced. In this respect, suppliers are often perceived as a source of delay risk, affecting the company's delivery reliability either directly or indirectly [9] and [27]. The potential impact of the suppliers' delivery reliability problems in many production industries requires a proper decision support system (DSS) to help in analyzing and reducing the delay's detrimental effects. Such a support system must be able to deal with highly complex environments, where both qualitative and quantitative elements play a substantial role. Nonetheless, considering the quantitative perspective, companies are often confronted with the lack of historical, quantifiable data and information about a supplier's previous performance; thus, in today's volatile business environment decisions usually have to be based on incomplete or even non-existent information. Focusing on the delivery reliability dimension, for example, distributional information on the earlier delivery performance of a supplier may be limited or missing (i.e., in the case of a new supplier). Sometimes, such a lack of numerical data is compensated for by an educated guess of the mean and the variance of the data distribution. According to Moon and Yun [18], under these conditions the tendency is to use normal distribution in the computational models, even though such an assumption does not provide the best decision in cases when other probability distributions with the same mean and variance occur. Furthermore, although DSS can assist decision makers in acquiring data, information, and knowledge regarding products, services, suppliers, and customers, not all of the possible factors behind an optimal decision can be algorithmically implemented, due to the complexity or the nature of the factors themselves. This aspect emphasizes the role and contribution of a human expert in integrating qualitative knowledge into the decision process. Considering the relevance of the supplier's delivery reliability dimension and the scarcity of contributions to this topic, the purpose of this paper is to investigate the feasibility of an architecture for a DSS that supports decision makers in dealing with delivery delay risks when the available information about a supplier's performance is limited to the mean and the standard deviation (or their educated guess). Specifically, we strive to address the following research questions: •How is it possible to mitigate the delay risk? How may computational models support the decision maker when no historical knowledge of the supplier's performance is available? •How can the computational model developed for delay risk mitigation be implemented within a DSS and integrated with qualitative information? We see our contribution as a possible foundation for developing a human-in-the-loop decision support system (HIL-DSS), allowing quantitative data to be complemented with qualitative information provided by a human expert. In order to answer the proposed research questions, the remainder of the paper is organized in five sections: the next section explores the role of buffers in reducing delivery delays in manufacturing sectors. Then, we delineate the scenario in which we developed and tested the computational model. The computational results are discussed in the following section, along with an outline of the integration of qualitative information. Finally, we present our conclusions and recommendations for future research.

In order to deal with delivery delay risk mitigation in a context characterized by limited information, we developed two distinct computational models that form the algorithmic foundation for developing a new, or adapting an existing, DSS. However, besides this well-defined logic, there is still a need for human involvement in evaluating the results provided by the decision models and effectively taking actions by adjusting, for instance, inventory control or negotiation strategies with particular suppliers. As stated by Subramania and Khare [25], this involvement is indispensable, since it “enables decisions to be based on experience and also factors which are non-quantifiable that cannot be easily implemented algorithmically.” The results developed in this paper must therefore be applied in a HIL-DSS setting. In this sense, our architecture for a HIL-DSS extends the conceptualization discussed in [25] by explicitly differentiating between a decision model as a formalized representation of the problem-solving approach, a preliminary decision as suggested output from the DSS, and a final decision made by the human expert, who also takes external factors into account. Acknowledging the important role of a human expert within a HIL-DSS, we think that the developed algorithmic foundation presented in this paper is encouraging, as it builds a solid basis for decision making. We advocate the following points as the main advantages of the proposed approach: •Flexibility and robustness of the computational model: flexibility is ensured by the possibility of applying the model to contexts with either a known or unknown probability distribution of the delay. The robustness is given by the assumptions underlying the distribution-free approach, where the results are formulated to provide the best solution against the worst situations among those characterized by a given mean and standard deviation. •Fewness of input variables: the model requires the definition (or estimation) of few input variables, such as the mean and average of previous delays (or an educated guess) and the costs cB and cD. This limited number of variables eases the implementation, run, and use of the model in a DSS. • Integration of the computational model with subjective elements and expertise: a computational model encompassing all of the aspects that characterize reality is hardly achievable and manageable. To overcome this issue, the model is intended to be complemented with judgmental elements provided by a human expert. Therefore, the computational model provides data that can be used as input by the human decision maker in formulating a complex decision. 6.1. Potential limitations and proposed amendments We identified two main limitations that affect the proposed architecture when dealing with real-life situations. In this section, we briefly discuss possible actions that can be undertaken in order to overcome the following limitations: •One of the main issues arising in applying the proposed approach may be the definition of the costs cB and cD, which depend on the specific context. Generally, only approximations are available, mainly because of the difficulties in recording actual costs; therefore, the quality of the solutions provided by the computational model is strongly correlated with the quality of the input data, as pointed out in Section 5.3. Nevertheless, this limitation of the quantitative model is compensated for by the presence of the human expert in the HIL-DSS, who may decide how to run the model multiple times for sensitivity analysis, overcoming this limitation. •Another limitation is the necessity of expressing the buffer in terms of days of coverage, which depends upon the rate of consumption of the buffered resource. In this respect, problems may arise in volatile contexts, where the consumption of resources may vary in time, leading to potential problems (i.e., if the rate of resource consumption increases significantly, the buffer is depleted in advance with respect to expectations, exposing the company to stock-out situations). To tackle this issue, a viable option of extending the described approach may be the implementation of a scenario analysis support in the DSS, helping the human decision maker by providing results based on distinct scenarios, each characterized by different rates of consumption. 6.2. Future work directions At the time of writing, a prototypical instantiation of the model has been developed to perform the analysis presented in this paper. Even though future work should be directed at developing usable versions for practical applications, thanks to the analytical procedure adopted in the development of the computational model, the results will not be dependent on the specific implementation. The main differences, indeed, will be related mostly to the connection to the main sources of data (i.e., the company ERP) and the graphical user interface (GUI). An interesting extension of this approach could be matching the calculated decisions and the estimated values by subject matter experts, in order to identify the potential root causes of striking differences in buffer sizing.