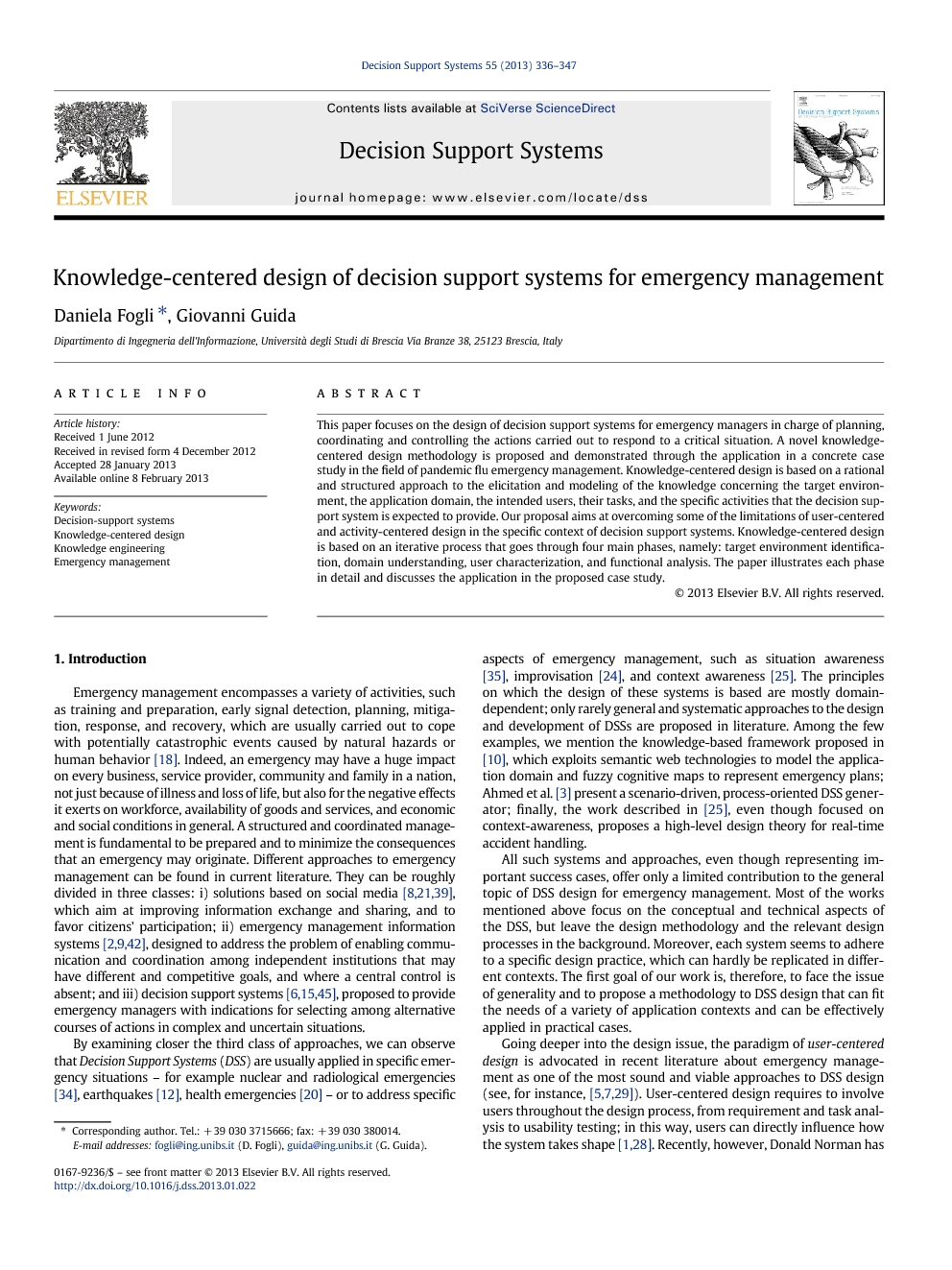 This paper focuses on the design of decision support systems for emergency managers in charge of planning, coordinating and controlling the actions carried out to respond to a critical situation. A novel knowledge-centered design methodology is proposed and demonstrated through the application in a concrete case study in the field of pandemic flu emergency management. Knowledge-centered design is based on a rational and structured approach to the elicitation and modeling of the knowledge concerning the target environment, the application domain, the intended users, their tasks, and the specific activities that the decision support system is expected to provide. Our proposal aims at overcoming some of the limitations of user-centered and activity-centered design in the specific context of decision support systems. Knowledge-centered design is based on an iterative process that goes through four main phases, namely: target environment identification, domain understanding, user characterization, and functional analysis. The paper illustrates each phase in detail and discusses the application in the proposed case study.

The research and experience reported in this paper provide a contribution to the state of the art in collaboration and emergency management from three perspectives. First of all, from the point of view of design methodologies, it proposes a novel knowledge-centered approach to DSS design which is a step further both with respect to user-centered design promoted in emergency management literature [7] and [29] and DSS research [22] and [40], and to activity-centered design proposed by Norman [27] for the development of complex interactive systems. In comparison with other approaches to DSS design recently proposed in literature, which are mainly concerned with the development of general frameworks (see for example, [3] and [10]) or high-level design theories (e.g., [25]), our methodology is based on a rational and structured approach, which exploits sound knowledge engineering methods to carry out all the phases and tasks of the design process. Besides emergency management, it is applicable in any decision-support context characterized by the availability of a variety of knowledge sources and by the need of balancing between informative and normative support. The practical application of the methodology is demonstrated with reference to HEALTHREATS project. Second, the experience reported in the paper has shown the validity – at least in emergency management applications – of the new decision support paradigm adopted, which combines normative and focused informative support. The advantages of this approach are many. First of all, emergency managers can concentrate only on critical cases that definitely require their personal competence and experience, relying for all simple decisions on a normative support. This way, their cognitive resources are not dispersed among a number of trivial choices, but can be focused on a small set of crucial aspects. Moreover, for critical decisions, emergency managers do not receive a generic informative support, which might give rise to the undesired result of increasing their information overload, but receive a focused support that provides them with synthetic information specifically tailored to the decision problem at hand. Third, a multifaceted approach to the evaluation of a DSS has been proposed, which considers not only the quality of user–DSS interaction, including usefulness and usability, but also the level of user-to-user interaction through the DSS, namely collaboration effectiveness. This represents a substantial advancement with respect to existing literature that usually focuses only on usability [19] and misses to consider the degree to which a system meets the concrete requirements of an application context. Moreover, the proposed approach has been developed in all technical details necessary for practical implementation and has been actually experimented in the case study considered. Finally, the present work has disclosed several promising research directions. An important topic, mentioned by more than one user during the experimentation, concerns the capability of the DSS to provide explanations and justifications for the intervention plans proposed, showing the goals that have inspired the design of the plan, the reasons behind the actions suggested, the alternatives discarded, and the expected benefits. This point might greatly contribute both to increase the level of system acceptance and to support its use as a training tool for improving emergency preparedness. Another issue concerns the possibility of providing the DSS with a new functional module that enables users, under specified and controlled conditions, to modify existing plans or to edit new plans at run-time in face of unforeseen situations. These plans might then be reconsidered after the emergency is concluded and, after critical revision, might become part of the permanent knowledge base of the system or discarded if they revealed to be inappropriate or ineffective. This might expand the flexibility of the DSS, stimulate a more active user participation, and set the background for continuous improvement; moreover, the DSS might support this way the incremental construction of a valuable repository of emergency management knowledge. A last, but not less important, direction for future activity is the extension and experimentation of the DSS to face other types of emergencies; a project in the area of safety in work environments will most probably be launched shortly.