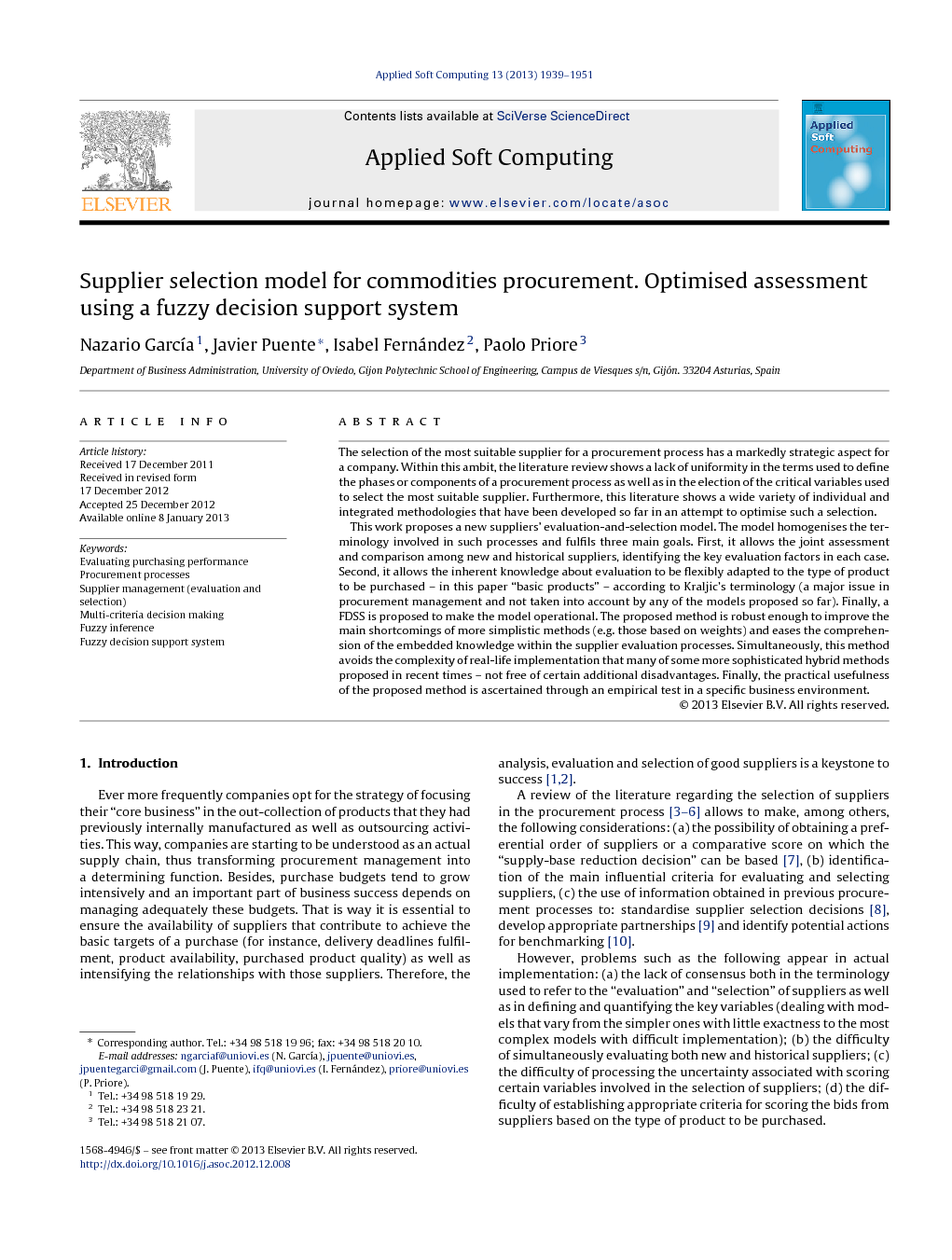 The selection of the most suitable supplier for a procurement process has a markedly strategic aspect for a company. Within this ambit, the literature review shows a lack of uniformity in the terms used to define the phases or components of a procurement process as well as in the election of the critical variables used to select the most suitable supplier. Furthermore, this literature shows a wide variety of individual and integrated methodologies that have been developed so far in an attempt to optimise such a selection. This work proposes a new suppliers’ evaluation-and-selection model. The model homogenises the terminology involved in such processes and fulfils three main goals. First, it allows the joint assessment and comparison among new and historical suppliers, identifying the key evaluation factors in each case. Second, it allows the inherent knowledge about evaluation to be flexibly adapted to the type of product to be purchased – in this paper “basic products” – according to Kraljic's terminology (a major issue in procurement management and not taken into account by any of the models proposed so far). Finally, a FDSS is proposed to make the model operational. The proposed method is robust enough to improve the main shortcomings of more simplistic methods (e.g. those based on weights) and eases the comprehension of the embedded knowledge within the supplier evaluation processes. Simultaneously, this method avoids the complexity of real-life implementation that many of some more sophisticated hybrid methods proposed in recent times – not free of certain additional disadvantages. Finally, the practical usefulness of the proposed method is ascertained through an empirical test in a specific business environment.

Ever more frequently companies opt for the strategy of focusing their “core business” in the out-collection of products that they had previously internally manufactured as well as outsourcing activities. This way, companies are starting to be understood as an actual supply chain, thus transforming procurement management into a determining function. Besides, purchase budgets tend to grow intensively and an important part of business success depends on managing adequately these budgets. That is way it is essential to ensure the availability of suppliers that contribute to achieve the basic targets of a purchase (for instance, delivery deadlines fulfilment, product availability, purchased product quality) as well as intensifying the relationships with those suppliers. Therefore, the analysis, evaluation and selection of good suppliers is a keystone to success [1] and [2]. A review of the literature regarding the selection of suppliers in the procurement process [3], [4], [5] and [6] allows to make, among others, the following considerations: (a) the possibility of obtaining a preferential order of suppliers or a comparative score on which the “supply-base reduction decision” can be based [7], (b) identification of the main influential criteria for evaluating and selecting suppliers, (c) the use of information obtained in previous procurement processes to: standardise supplier selection decisions [8], develop appropriate partnerships [9] and identify potential actions for benchmarking [10]. However, problems such as the following appear in actual implementation: (a) the lack of consensus both in the terminology used to refer to the “evaluation” and “selection” of suppliers as well as in defining and quantifying the key variables (dealing with models that vary from the simpler ones with little exactness to the most complex models with difficult implementation); (b) the difficulty of simultaneously evaluating both new and historical suppliers; (c) the difficulty of processing the uncertainty associated with scoring certain variables involved in the selection of suppliers; (d) the difficulty of establishing appropriate criteria for scoring the bids from suppliers based on the type of product to be purchased. In the present paper a model is designed to select the most suitable supplier in a basic product procurement process. The model combines the scores of the bids that have been submitted and the features of the supplier that tries to be awarded the contract. Therefore, according to literature, the most relevant variables to be included are identified in the process of scoring the bids as well as in the process of obtaining a final evaluation for the supplier itself. In the same way, two calculation methodologies are to be applied on the model to evaluate both processes. The first one is based on weighting the importance of the variables: the “weighted-point evaluation” method. The second method proposes the development of a fuzzy decision support system – FDSS. This system improves the performance of the model by using linguistic treatment of the variables involved and by including the necessary knowledge (as rules) to make optimal decisions in the process of assigning purchases of basic products. This article is divided into five sections. After this introductory section, in Section 2, there is a review of the literature so one can standardise the terminology used in selecting suppliers and in identifying the variables and methods that are most commonly employed. Section 3 describes the design of the proposed model showing its operational logic, it includes the definition of the variables chosen and engaged in the scoring of bids, and finally, it rates each supplier and the determining criteria that are considered by companies in the process of buying basic products. Section 4 proposes two assessing methods for running the model, analysing them with examples and shows the results that are obtained. Finally, the conclusions and other possible uses of the proposed model are presented for procurement processes with other types of products.

The literature review has allowed us to see that there are different interpretations of the concept of the selection of suppliers. In the same way a multitude of proposals regarding the variables that influence the process and the possible assessment tools have been found. After an effort of synthesis, a model has been developed that uses the most usual variables and methodologies. This model allows to evaluate bids and select suitable suppliers for purchasing basic products, not taking into account the subjective opinion of the responsible for the purchasing process by providing a systematic evaluation. The model, structurally, has the advantage of evaluating the bids as well as the final score of new suppliers together with historical suppliers. Operationally, the model shows its flexibility by allowing one to opt for simple-solving methods such as the “weighted-point method”, based on assigning weights to the involved variables, or with more sophisticated and efficient methods such as a FDSS. With both methods, the model allows specific bids of different types of products to be evaluated, focusing this article on the basic type, according to the classification of Kraljic. While the method of weighting allows the evaluation system to be easily and quickly implemented, there are several drawbacks such as: excessive linearity in the results of assessments, the difficulty of conditioning the outcome of the evaluation according to the values obtained with some of the variables involved that do not reach a threshold value, the necessity of standardising the ranges of the dependent variables according to the ranges of the independent ones, or the difficulty of globally interpreting the results or the uncertainty associated with scoring certain influential variables in the model. To solve these problems we have developed a FDSS. This system decreases the linearity in the evaluation of bids and suppliers, allowing to adapt these assessments to the actual policies of basic products purchases, which increases the system reliability. It also allows certain required nuances to be reflected in the variables of the model: for example, a bad score of the price will penalise a bid (since this is the crucial variable in the assessment for basic products), or a previous historical negative behaviour may penalise the final score of the supplier. On the other hand, the structure of a FDSS avoids the prior standardisation of certain variables involved in the model, as is the case with the price. Finally, it is easier to observe the knowledge of the decision included in the model through inference maps provided by the tool, which then make it a more intuitive and robust evaluation for the bids and the final score for each supplier. The results obtained by the FDSS method show a better match with actual behaviour for the purchase of basic products than the one that is produced by the method of weights. Additionally, the designed system is flexible enough to allow the rule base to adapt to the actual policies specific to a particular type of product and/or for a particular business sector. Finally, the practical usefulness of the proposed method is ascertained through an empirical test in a specific business environment. As an extension to this article, the design and testing of a new model is proposed in order to evaluate bids and select the appropriate supplier in other types of products, such as that described in the Kraljic matrix for strategic products. This would require the development of an adequate knowledge base according to the actual policies for these types of products.