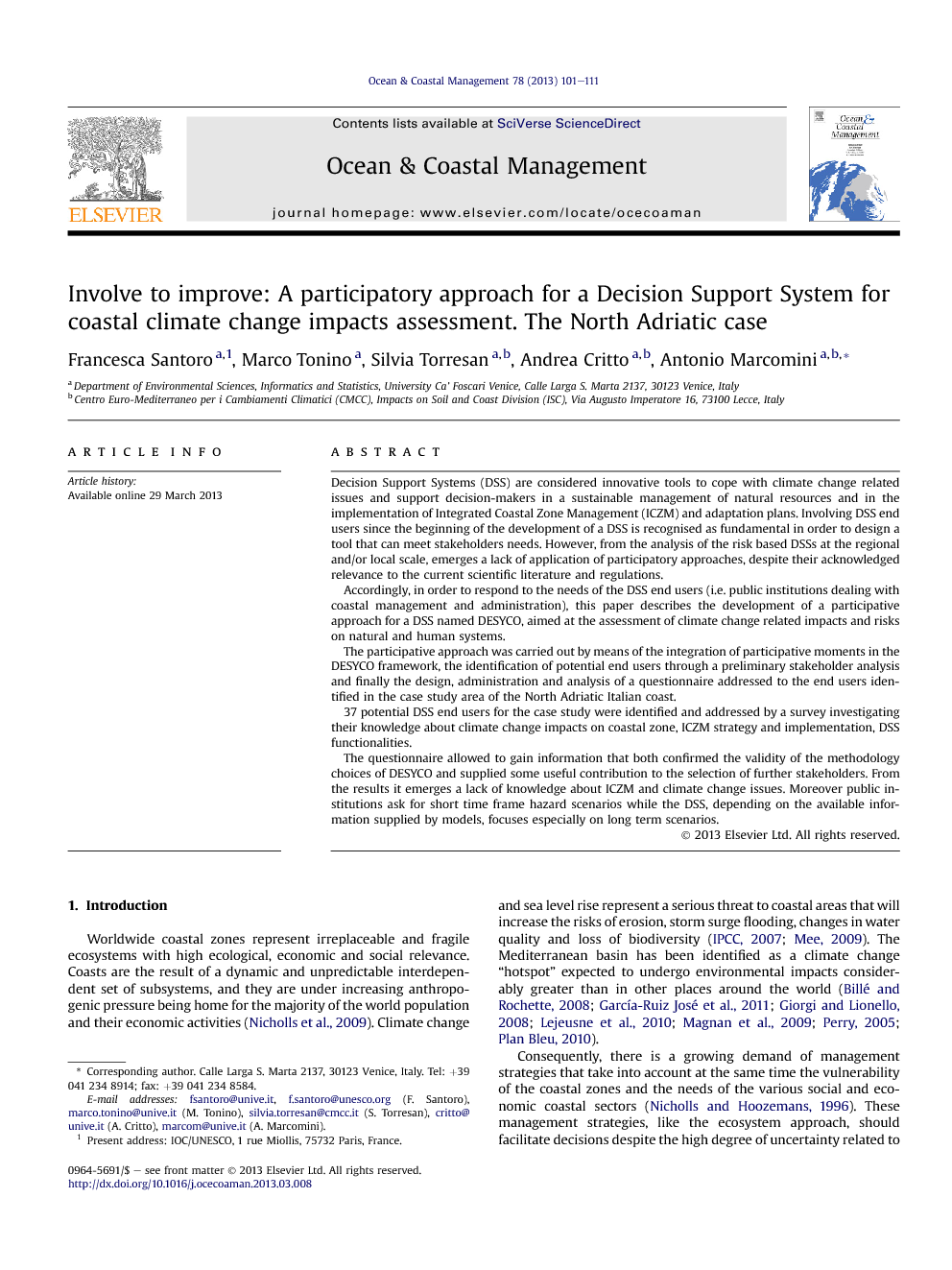 Decision Support Systems (DSS) are considered innovative tools to cope with climate change related issues and support decision-makers in a sustainable management of natural resources and in the implementation of Integrated Coastal Zone Management (ICZM) and adaptation plans. Involving DSS end users since the beginning of the development of a DSS is recognised as fundamental in order to design a tool that can meet stakeholders needs. However, from the analysis of the risk based DSSs at the regional and/or local scale, emerges a lack of application of participatory approaches, despite their acknowledged relevance to the current scientific literature and regulations. Accordingly, in order to respond to the needs of the DSS end users (i.e. public institutions dealing with coastal management and administration), this paper describes the development of a participative approach for a DSS named DESYCO, aimed at the assessment of climate change related impacts and risks on natural and human systems. The participative approach was carried out by means of the integration of participative moments in the DESYCO framework, the identification of potential end users through a preliminary stakeholder analysis and finally the design, administration and analysis of a questionnaire addressed to the end users identified in the case study area of the North Adriatic Italian coast. 37 potential DSS end users for the case study were identified and addressed by a survey investigating their knowledge about climate change impacts on coastal zone, ICZM strategy and implementation, DSS functionalities. The questionnaire allowed to gain information that both confirmed the validity of the methodology choices of DESYCO and supplied some useful contribution to the selection of further stakeholders. From the results it emerges a lack of knowledge about ICZM and climate change issues. Moreover public institutions ask for short time frame hazard scenarios while the DSS, depending on the available information supplied by models, focuses especially on long term scenarios.

In this paper, starting from the conceptual framework of the Decision Support System DESYCO, aimed at the integrated assessment and management of climate change impacts and risks on coastal zones on a regional scale, a participative approach for it was developed in order to design a tool according to the needs of end users. Despite the broad recognition of the importance of end users' involvement in the development of a DSS, only a few studies related to the methods and results of participative approaches applied in DSS development can be found in the existing literature. Therefore this paper is meant to show the steps, methodology and results of the integration of a participatory process in a DSS. Some of the participation steps of the referring DSS framework were applied by means of a questionnaire in the case study area in order to gain information from the potential DSS end users. This survey allowed for the accomplishment of some of the aims of the participation assessments integrated in the DSS framework; one of the results of the administration of the questionnaire is a preliminary stakeholder analysis for the case study of the Italian North Adriatic coast (from the mouth of the Po River to the Italy-Slovenia border) with the identification of 37 potential DSS end users (i.e. public institutions concerned with the management and/or administration of coastal zones) involved in the questionnaire. In turn, by answering the questions, the respondents suggested further relevant stakeholders' involvement in the development of a DSS. The list of stakeholders identified with the contribution of respondents can be considered a starting point to proceed further in the development of a stakeholder analysis. Furthermore, the survey allowed for gaining information that both confirmed the validity of the methodology choices and supplied various useful contributions to the DSS framework. DESYCO should integrate information on ICZM due to the lack of knowledge on this issue emerged from the survey, stressing the role of ICZM in broad strategies that implement action for adaptation. Further information on climate change impact severity should be provided to justify methodology choices (e.g. explaining that time frame scenarios are dependent on climate model output). Future research development on participative approaches in the DSS concerns enhancing the involvement of the end users in the development of the various phases of the DSS framework by means of suitable participation tools and methods (e.g. workshops), thus accomplishing the other proposed participative assessments integrated within the DESYCO framework.