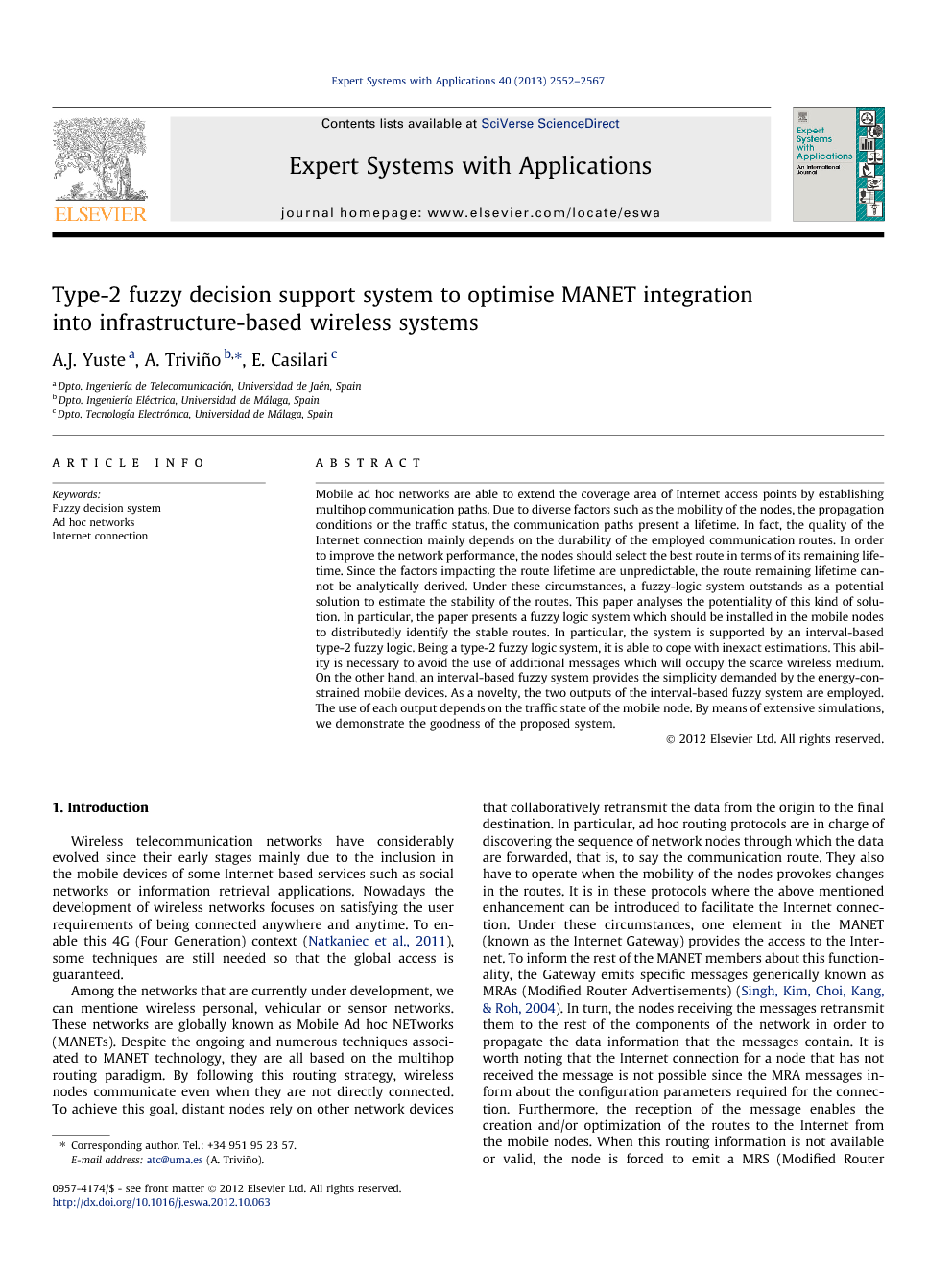 Mobile ad hoc networks are able to extend the coverage area of Internet access points by establishing multihop communication paths. Due to diverse factors such as the mobility of the nodes, the propagation conditions or the traffic status, the communication paths present a lifetime. In fact, the quality of the Internet connection mainly depends on the durability of the employed communication routes. In order to improve the network performance, the nodes should select the best route in terms of its remaining lifetime. Since the factors impacting the route lifetime are unpredictable, the route remaining lifetime cannot be analytically derived. Under these circumstances, a fuzzy-logic system outstands as a potential solution to estimate the stability of the routes. This paper analyses the potentiality of this kind of solution. In particular, the paper presents a fuzzy logic system which should be installed in the mobile nodes to distributedly identify the stable routes. In particular, the system is supported by an interval-based type-2 fuzzy logic. Being a type-2 fuzzy logic system, it is able to cope with inexact estimations. This ability is necessary to avoid the use of additional messages which will occupy the scarce wireless medium. On the other hand, an interval-based fuzzy system provides the simplicity demanded by the energy-constrained mobile devices. As a novelty, the two outputs of the interval-based fuzzy system are employed. The use of each output depends on the traffic state of the mobile node. By means of extensive simulations, we demonstrate the goodness of the proposed system.

Wireless telecommunication networks have considerably evolved since their early stages mainly due to the inclusion in the mobile devices of some Internet-based services such as social networks or information retrieval applications. Nowadays the development of wireless networks focuses on satisfying the user requirements of being connected anywhere and anytime. To enable this 4G (Four Generation) context (Natkaniec et al., 2011), some techniques are still needed so that the global access is guaranteed. Among the networks that are currently under development, we can mentione wireless personal, vehicular or sensor networks. These networks are globally known as Mobile Ad hoc NETworks (MANETs). Despite the ongoing and numerous techniques associated to MANET technology, they are all based on the multihop routing paradigm. By following this routing strategy, wireless nodes communicate even when they are not directly connected. To achieve this goal, distant nodes rely on other network devices that collaboratively retransmit the data from the origin to the final destination. In particular, ad hoc routing protocols are in charge of discovering the sequence of network nodes through which the data are forwarded, that is, to say the communication route. They also have to operate when the mobility of the nodes provokes changes in the routes. It is in these protocols where the above mentioned enhancement can be introduced to facilitate the Internet connection. Under these circumstances, one element in the MANET (known as the Internet Gateway) provides the access to the Internet. To inform the rest of the MANET members about this functionality, the Gateway emits specific messages generically known as MRAs (Modified Router Advertisements) (Singh, Kim, Choi, Kang, & Roh, 2004). In turn, the nodes receiving the messages retransmit them to the rest of the components of the network in order to propagate the data information that the messages contain. It is worth noting that the Internet connection for a node that has not received the message is not possible since the MRA messages inform about the configuration parameters required for the connection. Furthermore, the reception of the message enables the creation and/or optimization of the routes to the Internet from the mobile nodes. When this routing information is not available or valid, the node is forced to emit a MRS (Modified Router Solicitation) message which is propagated in the network until it reaches the Gateway. This element replies with an unicast MRA, so it is only transported through the route established between the Gateway and the node. Taking into account the use that the mobile nodes make of the MRA messages and the consequences of not receiving them, it is understandable that the way how these messages are propagated (process known as the Gateway discovery) will dramatically impact on the network performance. In this sense, the Gateway can emit the messages on demand, periodically or following a combination of these approaches (Wakikawa, Tuimonen, & Clausen, 2005). The suitability of each type of emission depends on the network and traffic conditions (Hamidian, 2009).This paper will focus on the optimized retransmissions of MRA messages in a proactive mechanism, i.e., a mechanism where the MRA messages are periodically generated by the Gateway every T seconds. Following the conventional proactive approach, every node receiving the MRA will retransmit it to its neighbours. This simple retransmission is not adequate for a resource-constrained network such as a MANET. In addition to the cost of retransmitting the message (in terms of energy consumption and aggregated wireless interference), the MRA message can be of no use if the route about which it is informing is not stable, that is, valid in the very next future. In order to avoid the inconvenient retransmissions through unstable links, this paper presents an adaptive technique to be implemented in the MANET nodes so that they can decide about the suitability of forwarding the message according to the route stability. Due to the unpredictable nature of ad hoc nodes (because of their movements and the wireless interferences or the radio noise), an artificial intelligence based approach is proposed. In particular, the difficulty of characterizing the stability of a wireless link has prompted the use of a Type-2 Fuzzy control system. Type-2 Fuzzy control systems have demonstrated their ability to cope with the combination of several parameters (which could indicate the link stability in our case), specially when these parameters can include uncertainties in their measurements. The rest of the paper is structured as follows. Section 2 justifies the use of a type-2 fuzzy system in this application. Section 3 introduces different concepts related to fuzzy logic. Section 4 explains the inputs and the output of the decision employed system to optimise MANET performance. The application to the connection to the Internet is analyzed in Section 5 and the configuration of the system is presented in Section 6. Section 7 compares the performance metrics obtained by different MRA forwarding approaches (including our proposal). Finally, Section 8 contains some concluding remarks.

The main contribution of this paper is the inclusion of a type-2 fuzzy logic decision system in mobile nodes in order to substantially improve the integration of ad hoc networks into the Internet. The optimization relies on the selective forwarding of the routing messages which is decided by the fuzzy system. The fuzzy decision system is supported by four input parameters. These parameters are estimated from the link layer (time duration, distance of the nodes) and the network ad hoc protocol. Therefore, it is a multilayer application based on the estimation of four parameters which may contain deviations in their measurements. The type II fuzzy logic decision system has shown its ability to cope with this kind of uncertainty. In contrast to other type II fuzzy logic applications, the proposed decision system employs the two corresponding outputs (no mean value is derived from them to decide). The output to use will depend on the traffic conditions of the mobile device. In particular, each kind of output is contrasted to a different threshold in order to decide how to proceed, that is, whether to forward the routing message or discard it. It has been shown that the configuration based on these two decision thresholds is able to improve the network performance. In fact, the configuration of the two system parameters was performed using a heuristic method considering a particular scenario. This scenario is later modified (in number of gateways, data traffic and node mobility) to verify the capability of the decision system to adapt to different network conditions. The obtained results demonstrate the goodness of the developed system. The results also confirm that the proposed decision algorithm outperforms other adaptive techniques, which also adjust the forwarding of the considered routing message. Moreover, the method is able to cope with changes on the speed of mobile nodes, on the traffic rates of the nodes that transmit data to the Internet or on the number of gateways which provide access to the Internet. Therefore, we can conclude that the fuzzy decision system is scalable in terms of these three parameters. A possible improvement of the fuzzy decision system would be the determination of the decision thresholds adaptively. For example, the gateway could may inform about these two thresholds. This could let the system administrator improve the system according to the instantaneous network requirements in terms of latency, loss and/or overloading.