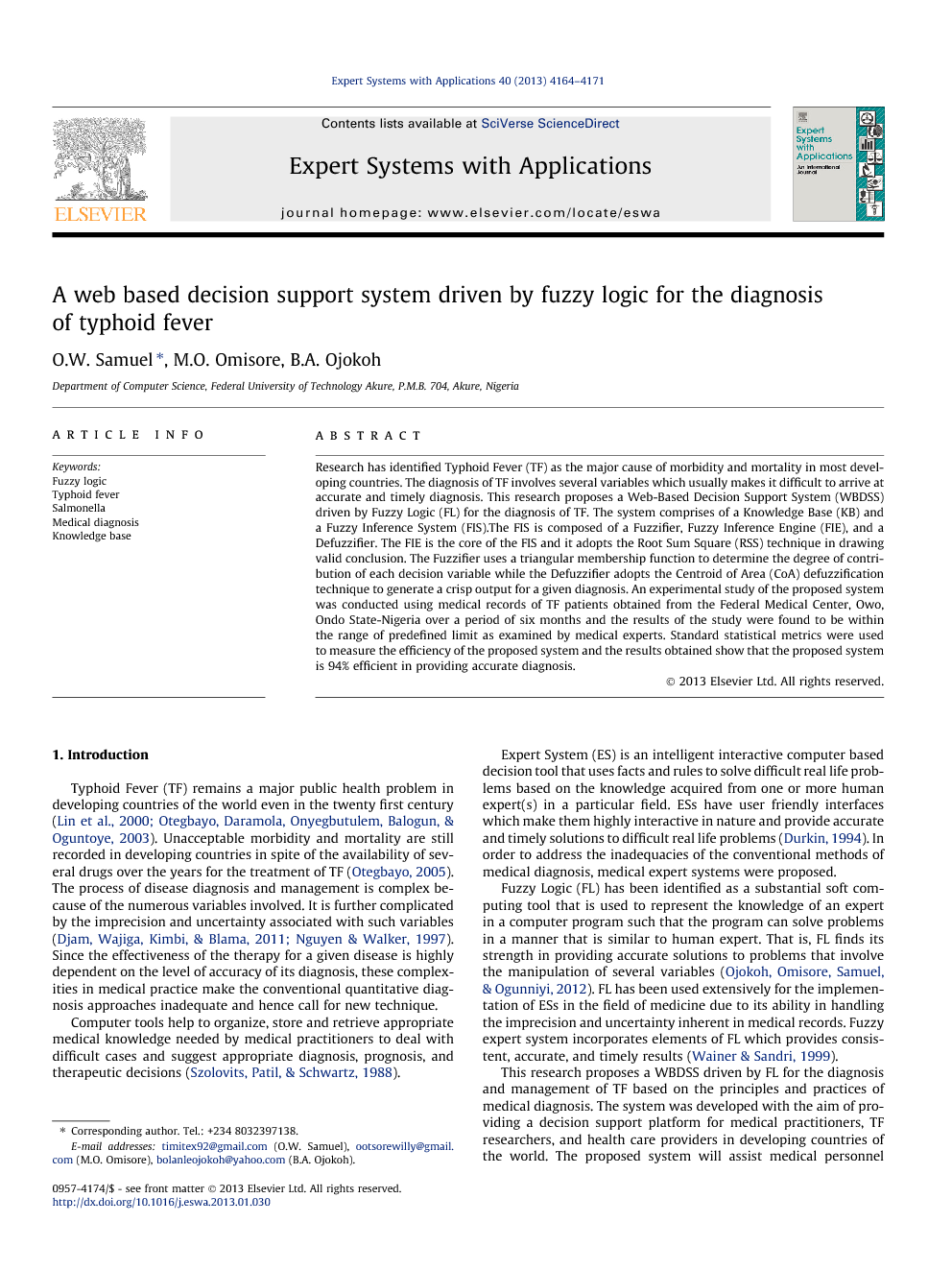 Research has identified Typhoid Fever (TF) as the major cause of morbidity and mortality in most developing countries. The diagnosis of TF involves several variables which usually makes it difficult to arrive at accurate and timely diagnosis. This research proposes a Web-Based Decision Support System (WBDSS) driven by Fuzzy Logic (FL) for the diagnosis of TF. The system comprises of a Knowledge Base (KB) and a Fuzzy Inference System (FIS).The FIS is composed of a Fuzzifier, Fuzzy Inference Engine (FIE), and a Defuzzifier. The FIE is the core of the FIS and it adopts the Root Sum Square (RSS) technique in drawing valid conclusion. The Fuzzifier uses a triangular membership function to determine the degree of contribution of each decision variable while the Defuzzifier adopts the Centroid of Area (CoA) defuzzification technique to generate a crisp output for a given diagnosis. An experimental study of the proposed system was conducted using medical records of TF patients obtained from the Federal Medical Center, Owo, Ondo State-Nigeria over a period of six months and the results of the study were found to be within the range of predefined limit as examined by medical experts. Standard statistical metrics were used to measure the efficiency of the proposed system and the results obtained show that the proposed system is 94% efficient in providing accurate diagnosis.

Typhoid Fever (TF) remains a major public health problem in developing countries of the world even in the twenty first century (Lin et al., 2000 and Otegbayo et al., 2003). Unacceptable morbidity and mortality are still recorded in developing countries in spite of the availability of several drugs over the years for the treatment of TF (Otegbayo, 2005). The process of disease diagnosis and management is complex because of the numerous variables involved. It is further complicated by the imprecision and uncertainty associated with such variables (Djam et al., 2011 and Nguyen and Walker, 1997). Since the effectiveness of the therapy for a given disease is highly dependent on the level of accuracy of its diagnosis, these complexities in medical practice make the conventional quantitative diagnosis approaches inadequate and hence call for new technique. Computer tools help to organize, store and retrieve appropriate medical knowledge needed by medical practitioners to deal with difficult cases and suggest appropriate diagnosis, prognosis, and therapeutic decisions (Szolovits, Patil, & Schwartz, 1988). Expert System (ES) is an intelligent interactive computer based decision tool that uses facts and rules to solve difficult real life problems based on the knowledge acquired from one or more human expert(s) in a particular field. ESs have user friendly interfaces which make them highly interactive in nature and provide accurate and timely solutions to difficult real life problems (Durkin, 1994). In order to address the inadequacies of the conventional methods of medical diagnosis, medical expert systems were proposed. Fuzzy Logic (FL) has been identified as a substantial soft computing tool that is used to represent the knowledge of an expert in a computer program such that the program can solve problems in a manner that is similar to human expert. That is, FL finds its strength in providing accurate solutions to problems that involve the manipulation of several variables (Ojokoh, Omisore, Samuel, & Ogunniyi, 2012). FL has been used extensively for the implementation of ESs in the field of medicine due to its ability in handling the imprecision and uncertainty inherent in medical records. Fuzzy expert system incorporates elements of FL which provides consistent, accurate, and timely results (Wainer & Sandri, 1999). This research proposes a WBDSS driven by FL for the diagnosis and management of TF based on the principles and practices of medical diagnosis. The system was developed with the aim of providing a decision support platform for medical practitioners, TF researchers, and health care providers in developing countries of the world. The proposed system will assist medical personnel especially in rural areas where there are shortage of doctors in providing quality health care services. The architecture of the proposed system as presented in Fig. 1 consists of a KB that houses the database and the rule base, a FIS that does the actual diagnosis, and a World Wide Web component which makes the proposed system accessible over the Internet. The remainder of this paper is organized as follows: Section 2 presents review of related work; Section 3 presents the architecture of the proposed system, method and materials adopted by the research; Section 4 presents the experimental study and result of the proposed system. Section 5 presents the evaluation of the proposed system; Section 6 presents the conclusion and recommendations.

This research developed a web based decision support system for the diagnosis of TF. The system is driven by fuzzy logic technique and has the capability to run on the Internet. The system can be used by medical experts and trained health care personnel to provide accurate and timely diagnosis of TF regardless of the location of the medical personnel. The system will help complement the insufficient numbers of medical experts in developing countries and eventually reduce the huge cost associated with patient diagnosis. Since the KB of the proposed system is centralized, it has the capability of housing enormous amount of information from which useful knowledge and patterns that could aid decision making can be mined. However, the membership functions of fuzzy logic systems which quantitatively define the linguistic labels employed by such systems usually take longer time to design and tune to accommodate new situations. Since neural network has the following capabilities: self learning, self tuning, and can be used to automatically generate membership functions for fuzzy logic systems, we therefore recommend that future research works in the area of medical diagnosis systems study the concept of neural networks and incorporate it into fuzzy logic based medical diagnosis systems for performance optimization.