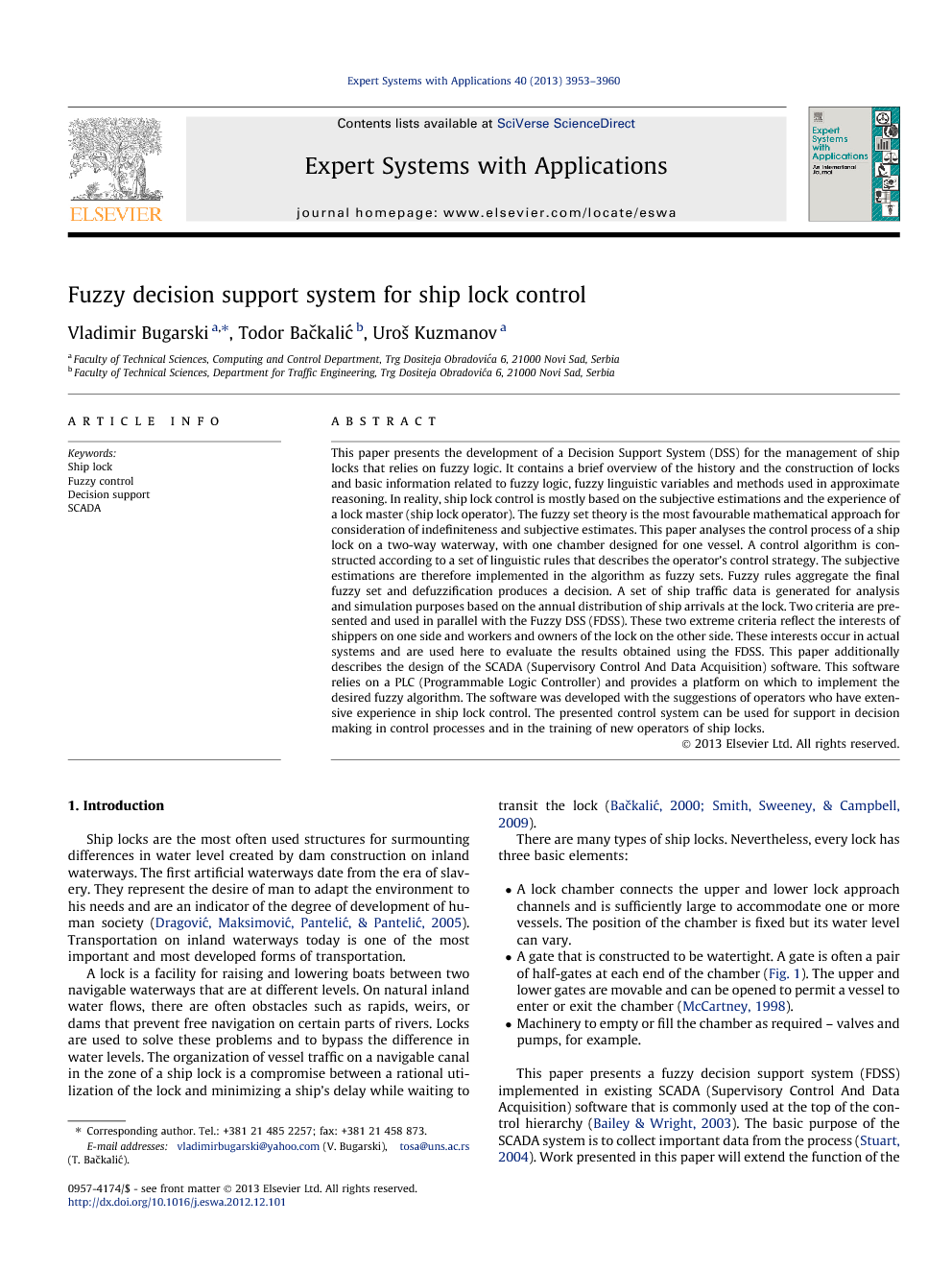 This paper presents the development of a Decision Support System (DSS) for the management of ship locks that relies on fuzzy logic. It contains a brief overview of the history and the construction of locks and basic information related to fuzzy logic, fuzzy linguistic variables and methods used in approximate reasoning. In reality, ship lock control is mostly based on the subjective estimations and the experience of a lock master (ship lock operator). The fuzzy set theory is the most favourable mathematical approach for consideration of indefiniteness and subjective estimates. This paper analyses the control process of a ship lock on a two-way waterway, with one chamber designed for one vessel. A control algorithm is constructed according to a set of linguistic rules that describes the operator’s control strategy. The subjective estimations are therefore implemented in the algorithm as fuzzy sets. Fuzzy rules aggregate the final fuzzy set and defuzzification produces a decision. A set of ship traffic data is generated for analysis and simulation purposes based on the annual distribution of ship arrivals at the lock. Two criteria are presented and used in parallel with the Fuzzy DSS (FDSS). These two extreme criteria reflect the interests of shippers on one side and workers and owners of the lock on the other side. These interests occur in actual systems and are used here to evaluate the results obtained using the FDSS. This paper additionally describes the design of the SCADA (Supervisory Control And Data Acquisition) software. This software relies on a PLC (Programmable Logic Controller) and provides a platform on which to implement the desired fuzzy algorithm. The software was developed with the suggestions of operators who have extensive experience in ship lock control. The presented control system can be used for support in decision making in control processes and in the training of new operators of ship locks.

Ship locks are the most often used structures for surmounting differences in water level created by dam construction on inland waterways. The first artificial waterways date from the era of slavery. They represent the desire of man to adapt the environment to his needs and are an indicator of the degree of development of human society (Dragović, Maksimović, Pantelić, & Pantelić, 2005). Transportation on inland waterways today is one of the most important and most developed forms of transportation. A lock is a facility for raising and lowering boats between two navigable waterways that are at different levels. On natural inland water flows, there are often obstacles such as rapids, weirs, or dams that prevent free navigation on certain parts of rivers. Locks are used to solve these problems and to bypass the difference in water levels. The organization of vessel traffic on a navigable canal in the zone of a ship lock is a compromise between a rational utilization of the lock and minimizing a ship’s delay while waiting to transit the lock (Bačkalić, 2000 and Smith et al., 2009). There are many types of ship locks. Nevertheless, every lock has three basic elements: •A lock chamber connects the upper and lower lock approach channels and is sufficiently large to accommodate one or more vessels. The position of the chamber is fixed but its water level can vary. • A gate that is constructed to be watertight. A gate is often a pair of half-gates at each end of the chamber (Fig. 1). The upper and lower gates are movable and can be opened to permit a vessel to enter or exit the chamber (McCartney, 1998). •Machinery to empty or fill the chamber as required – valves and pumps, for example. This paper presents a fuzzy decision support system (FDSS) implemented in existing SCADA (Supervisory Control And Data Acquisition) software that is commonly used at the top of the control hierarchy (Bailey & Wright, 2003). The basic purpose of the SCADA system is to collect important data from the process (Stuart, 2004). Work presented in this paper will extend the function of the SCADA system with the proposed expert system, which is designed as a software upgrade to assist lock masters in the decision-making process.

Fuzzy set theory and fuzzy logic can be used for defining and forming the control model of the ship-lockage process. This paper defined a method and a process for creating a fuzzy control system that can be used for support in the operator’s decision-making or in training new operators. The fuzzy control system for ship-lockage can be directly used (with repeated checking and verification) only on the actual system that was modelled (the ship lock “Kucura”). The complete procedure, from interviews to fuzzy controller development, should be repeated in any other case. The developed control system can be used as: •part of the control system with automatic or semi-automatic control and •support in decision making in the classical system. There is a hope that with some optimization technique, we could obtain improvements such as reducing the number of empty lockages and the average waiting time per ship. We must not forget that the obtained results are very much dependent on the generated traffic set and the intensity of arrivals of ships at the ship lock. A fuzzy decision-making system was constructed for a basic type of lock – a single-channel ship lock with two opposite, stochastic flows. Therefore, the input fuzzy variables are simple. Further development and research can proceed in two directions. The first is greater complexity in lock functionality. Instead of the single-channel lock, a multi-channel lock can be considered. In actual systems, this is not rare; locks often consist of two chambers operating in parallel. There are also multi-chamber locks connected in series or parallel. Such systems would need to have fuzzy input variables and fuzzy rules that are more complex. Research and development in this area can proceed in the direction of more complex input data and sets of ships (e.g., water level difference, ship dimensions, and priorities). Vessel size plays an important role for navigation through waterways and for the lockage. Locks have a limited capacity. Some ships are too large to be able to fit into the lock chamber, and there are cases where one chamber can hold multiple ships at the same time. Moreover, military, service, commercial and private vessels in actual systems do not have the same priority; some classes of ships have a higher priority for using the lock than others. It is also possible to establish levels of uncertainty that consider hydro-meteorological conditions and other specific qualities. This could introduce additional fuzzy rules. A well-designed fuzzy decision-making system could serve as an excellent aid in the choice of the management action when there are more requests for lockage by a number of ships with different priorities. In any case, the fuzzy decision support system may prove to be a reliable aid in the management of the ship lock. Regarding the guidelines and the recommendations of the Inland Navigation Commission (2004), the fuzzy decision support system proposed in this paper is designed to be compatible with the River Information Service (RIS) that is widely used to support traffic management, transportation and navigation on inland waterways. RIS information is used to manage, monitor and optimize traffic. A general control model is possible if basic statements are changed. This can be accomplished through a detailed analysis of water and energy consumption and ship delay costs. In this new model, the final decision “change of condition of the lock” can be influenced not only by ship distance from the lock but also by: energy consumption, water consumption, water level difference and ship dimensions (with a dependence on the level of uncertainty). Further development of this research will most likely be an optimization of fuzzy membership functions to achieve better performance. Genetic algorithms and particle swarm optimization (Ankur et al., 2011, Chen, 2006, Kanović et al., 2011, Kennedy and Eberhart, 2001 and Rapaić and Kanović, 2009) could be the best choices for this purpose, as analysed in Bergh (2001) and shown in Rees, Deane, Rakes, and Baker (2011). Tapkan, Ozbakir, and Baykasoglu (2013) gave an example of a “bees” algorithm for solving multiple-objective problems that can be considered. The run-time complexity of genetic algorithms is analysed in Aytug and Koehler (2007). Onieva et al. (2012) have used genetic algorithms for the optimization of a fuzzy traffic decision system.