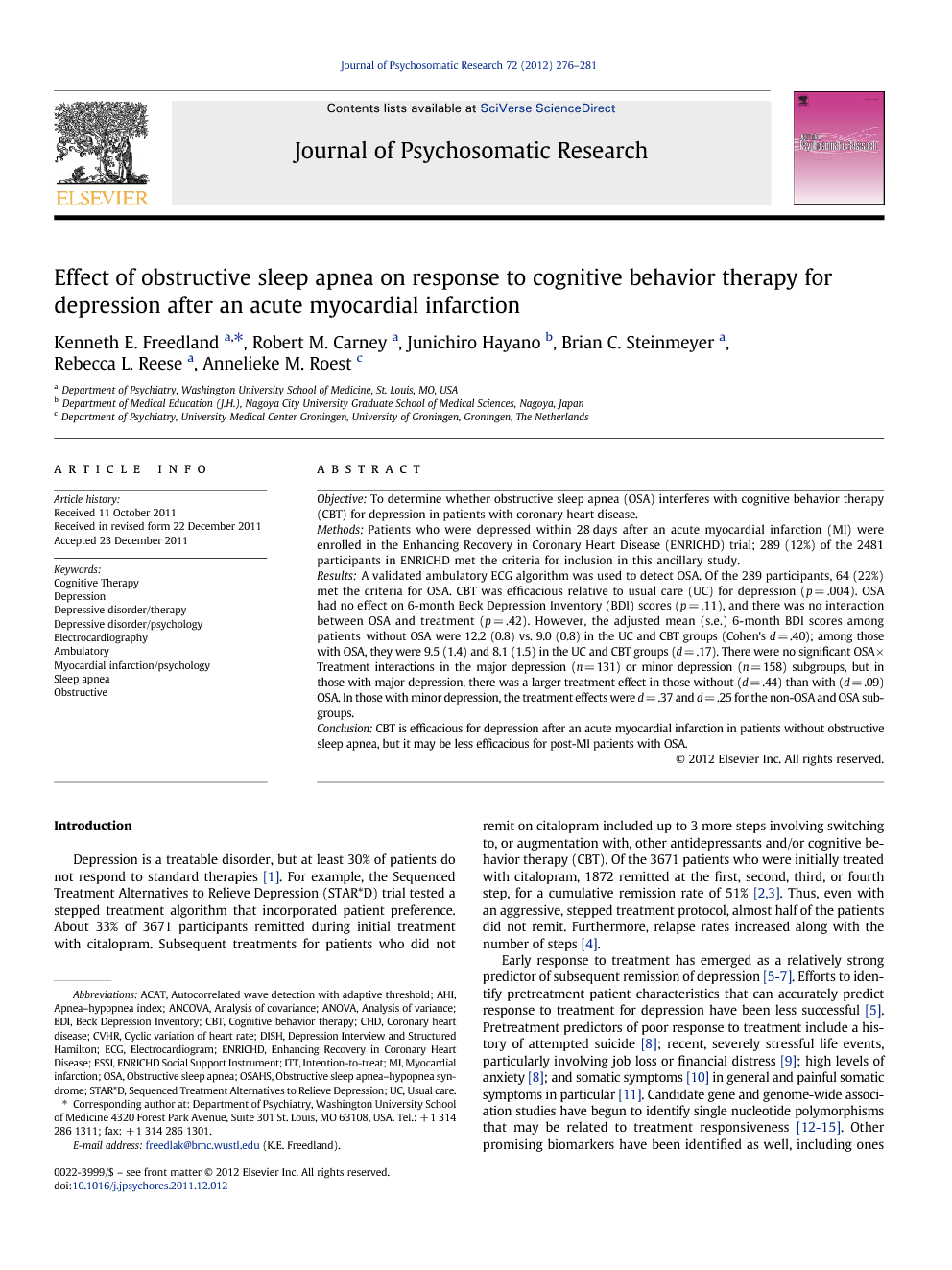 Objective To determine whether obstructive sleep apnea (OSA) interferes with cognitive behavior therapy (CBT) for depression in patients with coronary heart disease. Methods Patients who were depressed within 28 days after an acute myocardial infarction (MI) were enrolled in the Enhancing Recovery in Coronary Heart Disease (ENRICHD) trial; 289 (12%) of the 2481 participants in ENRICHD met the criteria for inclusion in this ancillary study. Results A validated ambulatory ECG algorithm was used to detect OSA. Of the 289 participants, 64 (22%) met the criteria for OSA. CBT was efficacious relative to usual care (UC) for depression (p = .004). OSA had no effect on 6-month Beck Depression Inventory (BDI) scores (p = .11), and there was no interaction between OSA and treatment (p = .42). However, the adjusted mean (s.e.) 6-month BDI scores among patients without OSA were 12.2 (0.8) vs. 9.0 (0.8) in the UC and CBT groups (Cohen's d = .40); among those with OSA, they were 9.5 (1.4) and 8.1 (1.5) in the UC and CBT groups (d = .17). There were no significant OSA × Treatment interactions in the major depression (n = 131) or minor depression (n = 158) subgroups, but in those with major depression, there was a larger treatment effect in those without (d = .44) than with (d = .09) OSA. In those with minor depression, the treatment effects were d = .37 and d = .25 for the non-OSA and OSA subgroups. Conclusion CBT is efficacious for depression after an acute myocardial infarction in patients without obstructive sleep apnea, but it may be less efficacious for post-MI patients with OSA. Abbreviations ACAT, Autocorrelated wave detection with adaptive threshold; AHI, Apnea–hypopnea index; ANCOVA, Analysis of covariance; ANOVA, Analysis of variance; BDI, Beck Depression Inventory; CBT, Cognitive behavior therapy; CHD, Coronary heart disease; CVHR, Cyclic variation of heart rate; DISH, Depression Interview and Structured Hamilton; ECG, Electrocardiogram; ENRICHD, Enhancing Recovery in Coronary Heart Disease; ESSI, ENRICHD Social Support Instrument; ITT, Intention-to-treat; MI, Myocardial infarction; OSA, Obstructive sleep apnea; OSAHS, Obstructive sleep apnea–hypopnea syndrome; STAR*D, Sequenced Treatment Alternatives to Relieve Depression; UC, Usual care

Depression is a treatable disorder, but at least 30% of patients do not respond to standard therapies [1]. For example, the Sequenced Treatment Alternatives to Relieve Depression (STAR*D) trial tested a stepped treatment algorithm that incorporated patient preference. About 33% of 3671 participants remitted during initial treatment with citalopram. Subsequent treatments for patients who did not remit on citalopram included up to 3 more steps involving switching to, or augmentation with, other antidepressants and/or cognitive behavior therapy (CBT). Of the 3671 patients who were initially treated with citalopram, 1872 remitted at the first, second, third, or fourth step, for a cumulative remission rate of 51% [2] and [3]. Thus, even with an aggressive, stepped treatment protocol, almost half of the patients did not remit. Furthermore, relapse rates increased along with the number of steps [4]. Early response to treatment has emerged as a relatively strong predictor of subsequent remission of depression [5], [6] and [7]. Efforts to identify pretreatment patient characteristics that can accurately predict response to treatment for depression have been less successful [5]. Pretreatment predictors of poor response to treatment include a history of attempted suicide [8]; recent, severely stressful life events, particularly involving job loss or financial distress [9]; high levels of anxiety [8]; and somatic symptoms [10] in general and painful somatic symptoms in particular [11]. Candidate gene and genome-wide association studies have begun to identify single nucleotide polymorphisms that may be related to treatment responsiveness [12], [13], [14] and [15]. Other promising biomarkers have been identified as well, including ones derived from proteomic, metabolomic, and brain imaging studies [16]. Nevertheless, our ability to identify treatment-resistant cases of depression prior to treatment remains quite limited. Treatment-resistant depression may have particularly serious implications for patients with coronary heart disease (CHD). Recent findings from several clinical trials have shown that patients who do not respond to standard treatments for depression are at high risk for mortality after acute coronary syndrome [17]. The prevalence of comorbid major depression in CHD is approximately 15% to 20%, and scores in the “depressed” range on self-report questionnaires are even more common.[18] Many patients with CHD and comorbid depression also have obstructive sleep apnea (OSA) [19]. Patients with OSA have repetitive episodes of complete (apnea) or partial (hypopnea) obstruction of the upper airway during sleep. During these episodes, there are efforts to breathe but inspiration is temporarily blocked. Many patients with obstructive OSA also have central apneic episodes in which breathing stops temporarily but without any airway blockage or respiratory effort. Both kinds of episodes can cause harmful reductions in the level of oxygen in the blood [20]. The prevalence of OSA is increasing along with the epidemic of obesity in the United States [21]. Sleep apnea is associated with a variety of adverse cardiovascular and metabolic effects [22] and [23]. It is also associated with depression [24], cognitive impairment [25], and structural changes in the brain [24] and [26]. Nevertheless, OSA is still markedly underdiagnosed and undertreated, even among cardiac patients at high risk of OSA-related mortality [19] and [27]. We recently reported that untreated OSA predicts a poor response to sertraline in patients with stable CHD and comorbid major depressive disorder (MDD) [28]. This was a secondary analysis of a randomized, double blind, placebo-controlled trial of omega-3 free fatty acid augmentation of sertraline, the primary results of which were reported elsewhere [29]. A previously validated algorithm [30] for detecting OSA was applied to 105 of the trial participants’ baseline electrocardiographic (ECG) data; 30 (29%) were classified as having moderate to severe OSA, with an algorithm-derived AHI ≥ 15. The mean (standard deviation) scores on the Beck Depression Inventory (BDI-II) [31] after treatment with sertraline were 19.0 (11.0) among patients with OSA and 13.0 (9.2) in those without OSA (p = 0.01). This difference remained significant after adjustment for the baseline severity of depression, treatment group (omega-3 vs. placebo), body mass index (BMI), and inflammatory markers. These findings suggest that untreated OSA can interfere with antidepressant therapy, but their generalizability to other forms of treatment for depression is unknown. Because OSA is often associated with daytime sleepiness, fatigue, and poor concentration, especially if left untreated [32], it might be especially problematic for nonpharmacological interventions such as CBT that depend upon the patient's attentive engagement in therapy. The present study investigated this question in a secondary analysis of data from the Enhancing Recovery in Coronary Heart Disease (ENRICHD) trial. In ENRICHD, patients with a recent history of acute myocardial infarction (MI) were randomly assigned to CBT or to usual care (UC) for depression. Data on OSA were obtained from a subset of ENRICHD participants. We used these data to test the hypothesis that OSA moderates the effect of CBT on depression in patients with a recent MI, and specifically that patients with OSA do not respond as well to CBT for depression as do patients without OSA.