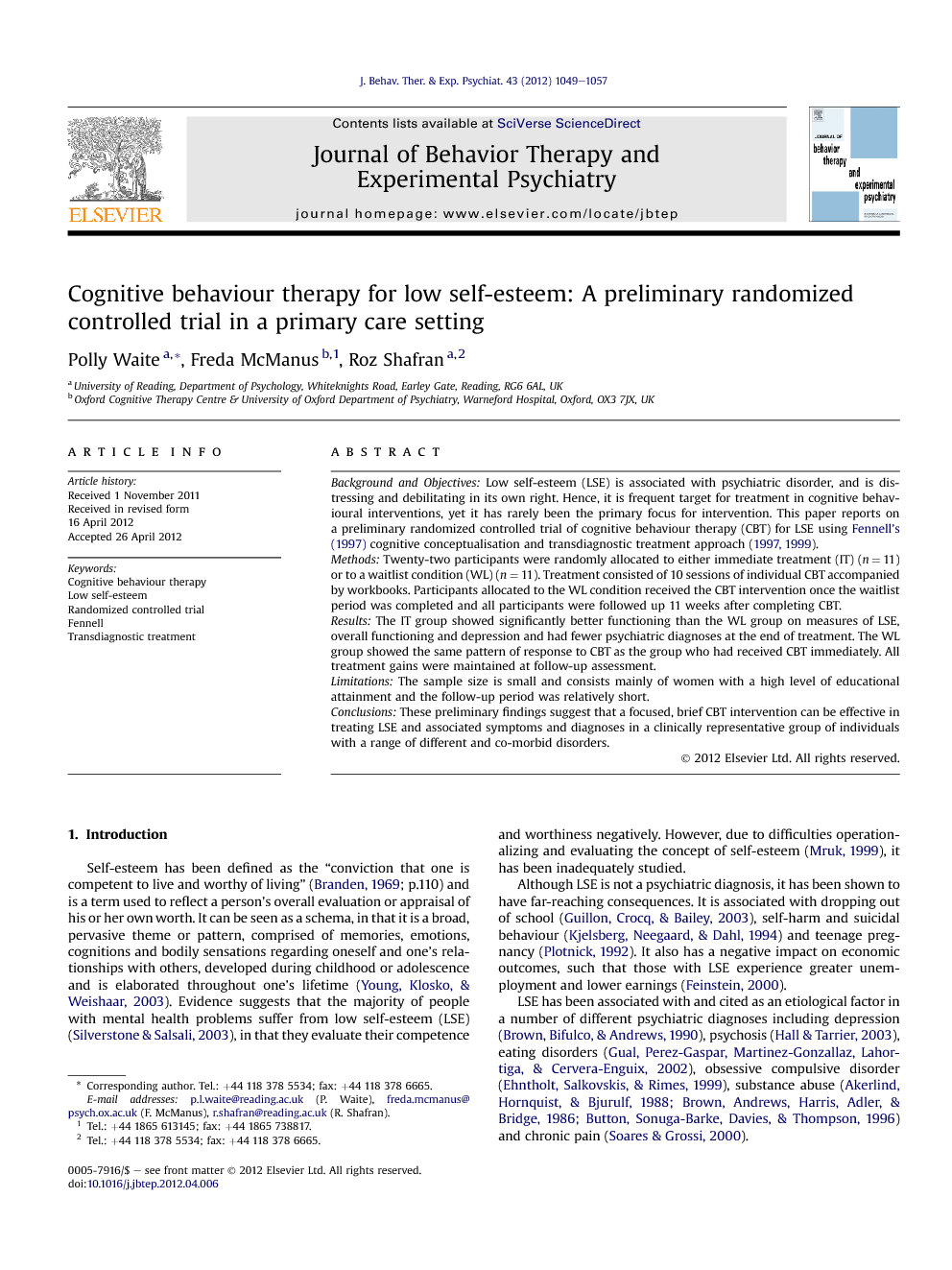 Background and Objectives Low self-esteem (LSE) is associated with psychiatric disorder, and is distressing and debilitating in its own right. Hence, it is frequent target for treatment in cognitive behavioural interventions, yet it has rarely been the primary focus for intervention. This paper reports on a preliminary randomized controlled trial of cognitive behaviour therapy (CBT) for LSE using Fennell’s (1997) cognitive conceptualisation and transdiagnostic treatment approach (Fennell, 1997 and Fennell, 1999). Methods Twenty-two participants were randomly allocated to either immediate treatment (IT) (n = 11) or to a waitlist condition (WL) (n = 11). Treatment consisted of 10 sessions of individual CBT accompanied by workbooks. Participants allocated to the WL condition received the CBT intervention once the waitlist period was completed and all participants were followed up 11 weeks after completing CBT. Results The IT group showed significantly better functioning than the WL group on measures of LSE, overall functioning and depression and had fewer psychiatric diagnoses at the end of treatment. The WL group showed the same pattern of response to CBT as the group who had received CBT immediately. All treatment gains were maintained at follow-up assessment. Limitations The sample size is small and consists mainly of women with a high level of educational attainment and the follow-up period was relatively short. Conclusions These preliminary findings suggest that a focused, brief CBT intervention can be effective in treating LSE and associated symptoms and diagnoses in a clinically representative group of individuals with a range of different and co-morbid disorders.

3.1. Pre-treatment comparisons Table 1 shows the demographic characteristics and baseline (pre-intervention) scores for participants in the IT and WL groups. There were no significant differences between the groups on any of the demographic or clinical variables, or in the source of referral. Most importantly, there was not a significant difference between the IT and WL groups in scores on the main outcome measure, the RSCQ, or on any of the other symptom measures or the mean number of Axis I diagnoses.