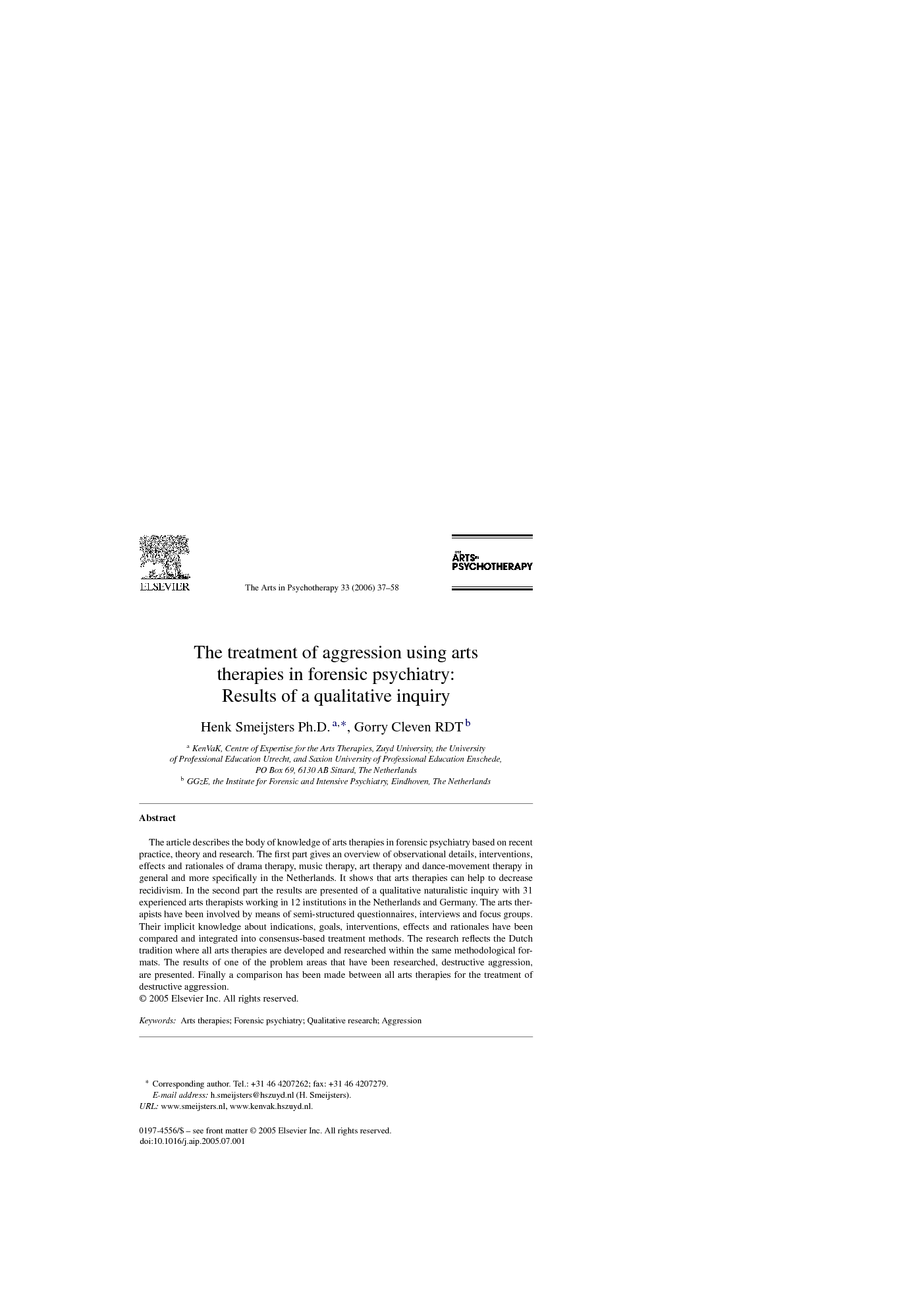 The article describes the body of knowledge of arts therapies in forensic psychiatry based on recent practice, theory and research. The first part gives an overview of observational details, interventions, effects and rationales of drama therapy, music therapy, art therapy and dance-movement therapy in general and more specifically in the Netherlands. It shows that arts therapies can help to decrease recidivism. In the second part the results are presented of a qualitative naturalistic inquiry with 31 experienced arts therapists working in 12 institutions in the Netherlands and Germany. The arts therapists have been involved by means of semi-structured questionnaires, interviews and focus groups. Their implicit knowledge about indications, goals, interventions, effects and rationales have been compared and integrated into consensus-based treatment methods. The research reflects the Dutch tradition where all arts therapies are developed and researched within the same methodological formats. The results of one of the problem areas that have been researched, destructive aggression, are presented. Finally a comparison has been made between all arts therapies for the treatment of destructive aggression.

In the Netherlands’ health care system, arts therapies are a regular part of treatment in psychiatric and forensic psychiatry. Nowadays there is strong pressure to become evidence-based. For this reason there is a need for arts therapists, and other therapists as well, to develop treatment protocols and treatment guidelines based on research. To start with, arts therapists describe their observations, goals, interventions, effects and rationales when working with specific problems. What prompted this research, which lasted several years, was the lack of a research-based overview of these aspects of treatment for all arts therapies in forensic psychiatry. Because arts therapists had started describing their work individually, the authors decided by means of questionnaires, interviews and focus groups to accumulate and analyze this material further. All arts therapies (drama therapy, music therapy, art therapy, dance-movement therapy) were included. The research reflects the Dutch tradition where all arts therapies are united in one national association and arts therapies are developed and researched within the same methodical formats and compared to each other. The first part of this article describes the context for forensic psychiatric treatment and the status of arts therapies in forensic psychiatry. A summary of the published research is included, which gives an overview of “the state of the arts” in forensic psychiatry. The second part of the article describes the research method and results. Forensic psychiatric treatment in the Netherlands Forensic psychiatry is an important concern in the Netherlands. Many forensic patients are treated in special forensic mental health institutes and will be released to the community sooner or later. For offenders who, at the time of the crime, had a psychiatric disturbance, for instance psychosis, personality disorder or addiction, it is agreed that they need treatment first before they can be released. These offenders are treated as clients in psychiatric hospitals that are closed from the community. Patients are imprisoned, but within the institution there is a psychiatric, not a prison culture. Although these patients are diagnosed using the Diagnostic and Statistical Manual of Mental Disorders (DSM-IV; American Psychiatric Association, 1994), in several psychiatric hospitals the focus of treatment is on so-called problem areas. Problem areas are related to the DSM-IV and the chain of offense. Broek, 2000a and Broek, 2000b distinguishes the following problem areas: lack of impulse control, aggression, grief, lack of empathy, low social functioning and lack of structure. Hörschläger, 2000a and Hörschläger, 2000b, in her follow-up of the research by Damen, 2000 and Damen, 2001, mentions problem areas such as tension, aggression, impulsivity, power, control, lack of boundaries, lack of structure, lack of expression and inadequate perception. Factor analytic research with the Behavioural Status Index ( Woods, Reed, & Collins, 2001) shows that there are factors for social perception, assertiveness and non-verbal behavior as problem areas for this population.

The project began using the preliminary definitions of 11 problem areas by Hörschläger (2000a) were used (see also Hörschläger & Cleven, 2002). The outcome resulted in seven consensus-based problem areas and treatment models. Within the scope of this article it is only possible to describe one problem area. A complete description of the research results (in Dutch) can be found in Smeijsters and Cleven (2004). Table 2 gives an overview of treatment possibilities for the problem area of destructive aggression. This table is the result of the researcher's content analysis of all open questionnaires, interviews and panel discussions as described above.