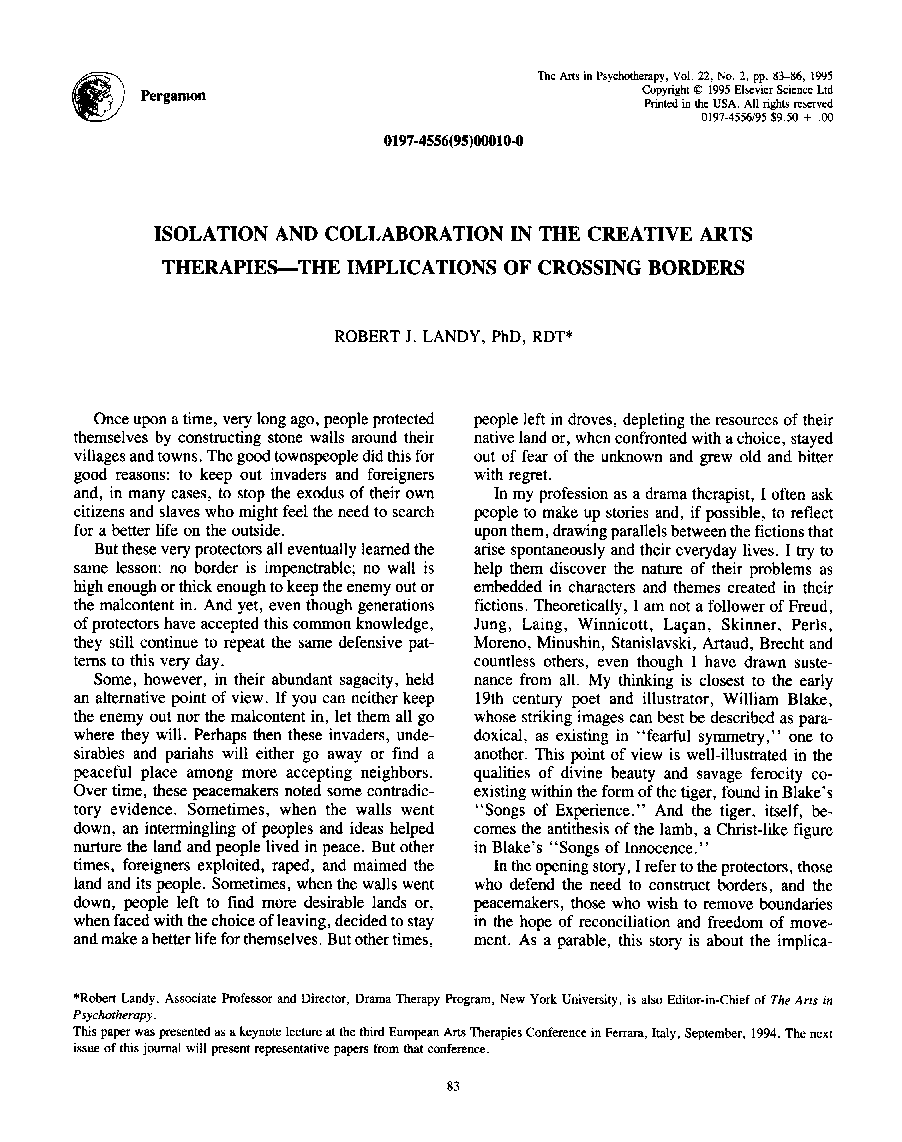 Once upon a time, very long ago, people protected themselves by constructing stone walls around their villages and towns. The good townspeople did this for good reasons: to keep out invaders and foreigners and, in many cases, to stop the exodus of their own citizens and slaves who might feel the need to search for a better life on the outside. But these very protectors all eventually learned the same lesson: no border is impenetrable; no wall is high enough or thick enough to keep the enemy out or the malcontent in. And yet, even though generations of protectors have accepted this common knowledge, they still continue to repeat the same defensive pat- terns to this very day. Some, however, in their abundant sagacity, held an alternative point of view. If you can neither keep the enemy out nor the malcontent in, let them all go where they will. Perhaps then these invaders, unde- sirables and pariahs will either go away or find a peaceful place among more accepting neighbors. Over time, these peacemakers noted some contradic- tory evidence. Sometimes, when the walls went down, an intermingling of peoples and ideas helped nurture the land and people lived in peace. But other times, foreigners exploited, raped, and maimed the land and its people. Sometimes, when the walls went down, people left to find more desirable lands or, when faced with the choice of leaving, decided to stay and make a better life for themselves. But other times, people left in droves, depleting the resources of their native land or, when confronted with a choice, stayed out of fear of the unknown and grew old and bitter with regret. In my profession as a drama therapist, I often ask people to make up stories and, if possible, to reflect upon them, drawing parallels between the fictions that arise spontaneously and their everyday lives. I try to help them discover the nature of their problems as embedded in characters and themes created in their fictions. Theoretically, I am not a follower of Freud, Jung, Laing, Winnicott, LaGan, Skinner, Perls, Moreno, Minushin, Stanislavski, Artaud, Brecht and countless others, even though I have drawn suste- nance from all. My thinking is closest to the early 19th century poet and illustrator, William Blake, whose striking images can best be described as para- doxical, as existing in “fearful symmetry,” one to another. This point of view is well-illustrated in the qualities of divine beauty and savage ferocity co- existing within the form of the tiger, found in Blake’s “Songs of Experience.” And the tiger, itself, be- comes the antithesis of the lamb, a Christ-like figure in Blake’s “Songs of Innocence.” In the opening story, I refer to the protectors, those who defend the need to construct borders, and the peacemakers, those who wish to remove boundaries in the hope of reconciliation and freedom of move- ment. As a parable, this story is about the implica-