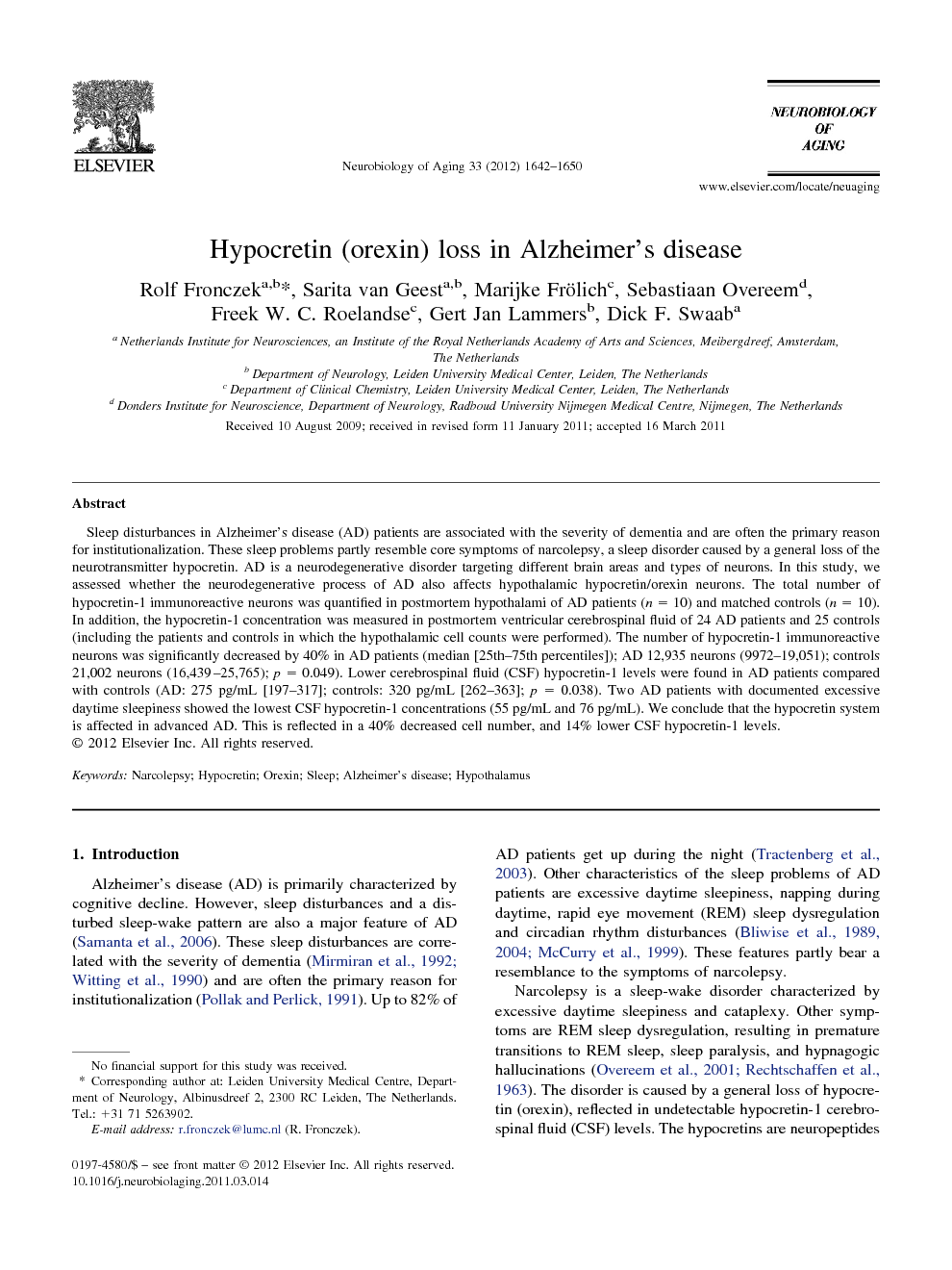 Sleep disturbances in Alzheimer's disease (AD) patients are associated with the severity of dementia and are often the primary reason for institutionalization. These sleep problems partly resemble core symptoms of narcolepsy, a sleep disorder caused by a general loss of the neurotransmitter hypocretin. AD is a neurodegenerative disorder targeting different brain areas and types of neurons. In this study, we assessed whether the neurodegenerative process of AD also affects hypothalamic hypocretin/orexin neurons. The total number of hypocretin-1 immunoreactive neurons was quantified in postmortem hypothalami of AD patients (n = 10) and matched controls (n = 10). In addition, the hypocretin-1 concentration was measured in postmortem ventricular cerebrospinal fluid of 24 AD patients and 25 controls (including the patients and controls in which the hypothalamic cell counts were performed). The number of hypocretin-1 immunoreactive neurons was significantly decreased by 40% in AD patients (median [25th–75th percentiles]); AD 12,935 neurons (9972–19,051); controls 21,002 neurons (16,439–25,765); p = 0.049). Lower cerebrospinal fluid (CSF) hypocretin-1 levels were found in AD patients compared with controls (AD: 275 pg/mL [197–317]; controls: 320 pg/mL [262–363]; p = 0.038). Two AD patients with documented excessive daytime sleepiness showed the lowest CSF hypocretin-1 concentrations (55 pg/mL and 76 pg/mL). We conclude that the hypocretin system is affected in advanced AD. This is reflected in a 40% decreased cell number, and 14% lower CSF hypocretin-1 levels.

Alzheimer's disease (AD) is primarily characterized by cognitive decline. However, sleep disturbances and a disturbed sleep-wake pattern are also a major feature of AD (Samanta et al., 2006). These sleep disturbances are correlated with the severity of dementia (Mirmiran et al., 1992 and Witting et al., 1990) and are often the primary reason for institutionalization (Pollak and Perlick, 1991). Up to 82% of AD patients get up during the night (Tractenberg et al., 2003). Other characteristics of the sleep problems of AD patients are excessive daytime sleepiness, napping during daytime, rapid eye movement (REM) sleep dysregulation and circadian rhythm disturbances (Bliwise et al., 1989, Bliwise, 2004 and McCurry et al., 1999). These features partly bear a resemblance to the symptoms of narcolepsy. Narcolepsy is a sleep-wake disorder characterized by excessive daytime sleepiness and cataplexy. Other symptoms are REM sleep dysregulation, resulting in premature transitions to REM sleep, sleep paralysis, and hypnagogic hallucinations (Overeem et al., 2001 and Rechtschaffen et al., 1963). The disorder is caused by a general loss of hypocretin (orexin), reflected in undetectable hypocretin-1 cerebrospinal fluid (CSF) levels. The hypocretins are neuropeptides produced only in the lateral hypothalamus by a restricted group of cells that project widely throughout the brain (Peyron et al., 1998). The most densely innervated regions are sleep-wake areas involved in sleep regulation and attention such as the locus coeruleus and raphe nuclei of the brainstem, the cholinergic neurons of the brainstem and forebrain, and histaminergic neurons of the posterior hypothalamus (Fung et al., 2001, Nambu et al., 1999, Peyron et al., 1998, Siegel, 2004 and van den Pol, 1999). Hypocretin neurons thus play a vital role in sleep-wake regulation. AD is a neurodegenerative disorder that affects multiple brain areas and types of neurons, very likely also including the primary sleep-regulating systems. The hypocretin system is affected in various neurodegenerative diseases, such as Parkinson's disease and Huntington's disease (Aziz et al., 2008, Fronczek et al., 2007 and Thannickal et al., 2007). We hypothesized that the neurodegenerative process in AD might also affect the hypocretin system, which could contribute to the sleep disturbances of AD patients. The observation of Friedman and others who have shown an inverse relation between lumbar CSF hypocretin-1 concentration and the amount of daytime naps of AD patients supports this possibility (Friedman et al., 2007). The aim of the current study was to examine whether the hypocretin system is affected in AD. Two approaches were used: the total number of hypocretin-1 producing neurons was determined in the lateral hypothalamus of 10 AD patients and 10 matched controls. Furthermore, the concentration of hypocretin-1 was measured in postmortem ventricular CSF of 24 AD patients and 25 controls (including the patients and controls in which the hypothalamic cell counts were performed).

3.1. Subject characteristics 3.1.1. Hypothalamus group No significant differences were found in age, sex, postmortem delay, fixation time, brain weight, and clock time of death between AD patients and the control group (all p > 0.079, Table 1). 3.2. Hypocretin-1 cytochemistry The morphology, location, and intensity of staining of hypocretin-1 IR neurons were comparable in AD patients and control subjects (Fig. 2). Hypocretin-1 IR neurons were limited to the perifornical region of the lateral hypothalamus. These neurons began to appear at the level where the fornix reaches the paraventricular nucleus. The density of the hypocretin-1 IR neurons increased as the fornix migrated down from the paraventricular nucleus toward the mamillary bodies, and started to disappear at the level where the fornix touches the mamillary bodies. This distribution pattern was in correspondence with previous studies (Aziz et al., 2008; Fronczek et al., 2005 and Fronczek et al., 2007).