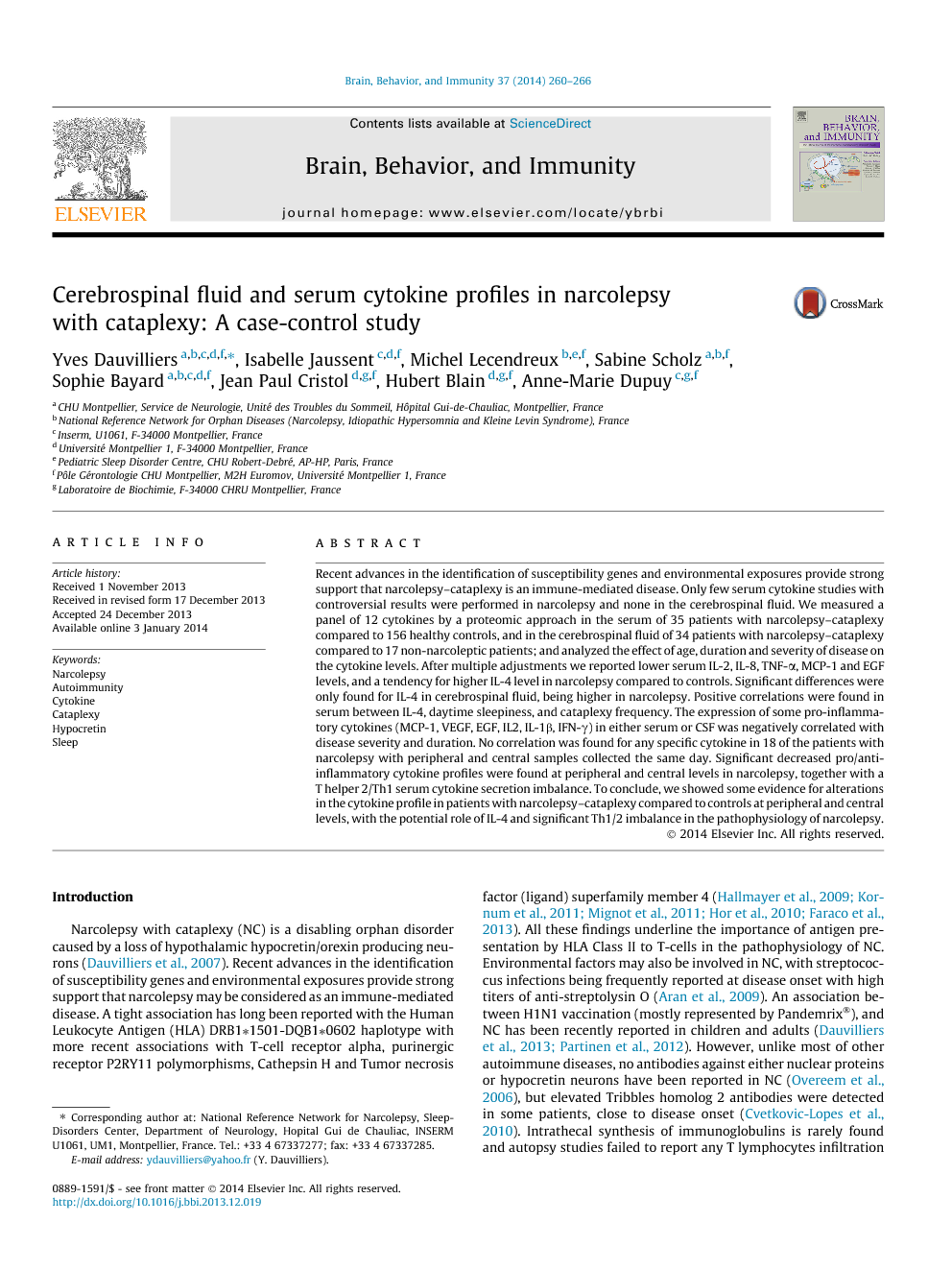 Recent advances in the identification of susceptibility genes and environmental exposures provide strong support that narcolepsy–cataplexy is an immune-mediated disease. Only few serum cytokine studies with controversial results were performed in narcolepsy and none in the cerebrospinal fluid. We measured a panel of 12 cytokines by a proteomic approach in the serum of 35 patients with narcolepsy–cataplexy compared to 156 healthy controls, and in the cerebrospinal fluid of 34 patients with narcolepsy–cataplexy compared to 17 non-narcoleptic patients; and analyzed the effect of age, duration and severity of disease on the cytokine levels. After multiple adjustments we reported lower serum IL-2, IL-8, TNF-α, MCP-1 and EGF levels, and a tendency for higher IL-4 level in narcolepsy compared to controls. Significant differences were only found for IL-4 in cerebrospinal fluid, being higher in narcolepsy. Positive correlations were found in serum between IL-4, daytime sleepiness, and cataplexy frequency. The expression of some pro-inflammatory cytokines (MCP-1, VEGF, EGF, IL2, IL-1β, IFN-γ) in either serum or CSF was negatively correlated with disease severity and duration. No correlation was found for any specific cytokine in 18 of the patients with narcolepsy with peripheral and central samples collected the same day. Significant decreased pro/anti-inflammatory cytokine profiles were found at peripheral and central levels in narcolepsy, together with a T helper 2/Th1 serum cytokine secretion imbalance. To conclude, we showed some evidence for alterations in the cytokine profile in patients with narcolepsy–cataplexy compared to controls at peripheral and central levels, with the potential role of IL-4 and significant Th1/2 imbalance in the pathophysiology of narcolepsy.

Narcolepsy with cataplexy (NC) is a disabling orphan disorder caused by a loss of hypothalamic hypocretin/orexin producing neurons (Dauvilliers et al., 2007). Recent advances in the identification of susceptibility genes and environmental exposures provide strong support that narcolepsy may be considered as an immune-mediated disease. A tight association has long been reported with the Human Leukocyte Antigen (HLA) DRB1∗1501-DQB1∗0602 haplotype with more recent associations with T-cell receptor alpha, purinergic receptor P2RY11 polymorphisms, Cathepsin H and Tumor necrosis factor (ligand) superfamily member 4 (Hallmayer et al., 2009, Kornum et al., 2011, Mignot et al., 2011, Hor et al., 2010 and Faraco et al., 2013). All these findings underline the importance of antigen presentation by HLA Class II to T-cells in the pathophysiology of NC. Environmental factors may also be involved in NC, with streptococcus infections being frequently reported at disease onset with high titers of anti-streptolysin O (Aran et al., 2009). An association between H1N1 vaccination (mostly represented by Pandemrix®), and NC has been recently reported in children and adults (Dauvilliers et al., 2013 and Partinen et al., 2012). However, unlike most of other autoimmune diseases, no antibodies against either nuclear proteins or hypocretin neurons have been reported in NC (Overeem et al., 2006), but elevated Tribbles homolog 2 antibodies were detected in some patients, close to disease onset (Cvetkovic-Lopes et al., 2010). Intrathecal synthesis of immunoglobulins is rarely found and autopsy studies failed to report any T lymphocytes infiltration or increased HLA Class II expression in the hypothalamus in NC (Fontana et al., 2010, Overeem et al., 2008 and Peyron et al., 2000). However, the low sample size and the long time period between the disease onset and the study prevents any conclusion on the immune mechanisms involved in hypocretin-deficient NC. Cytokines are small, short-lived proteins produced by blood leukocytes and glial cells that initiate, propagate or inhibit an inflammatory response. These signaling compounds form a complex network of inflammatory mediators with a central role in the immune system (Sokol et al., 2008). Even if cytokines and their receptors are involved in a variety of immunological and inflammatory diseases, only rare studies focused on their expression in NC. Previous studies failed to report on abnormalities of T-cell function in NC (Fontana et al., 2010 and Overeem et al., 2008), except for higher interleukin 6 (IL-6) secretion by mitogen-stimulated blood monocytes (Hinze-Selch et al., 2008). A slight increase of IL-6 and Tumor Necrosis Factor-α (TNF-α) serum levels was later detected in NC compared to controls (Okun et al., 2004 and Vgontzas et al., 1997). Himmerich and collaborators did not confirm these results but found higher soluble TNF receptor 2 levels in NC in comparison to gender-, age-, and BMI-matched controls (Himmerich et al., 2006). However, none of previous cytokine studies focused on cerebrospinal fluid (CSF) assessment in NC neither took into account the duration and severity of the disease while cytokine concentrations profile may vary depending on temporal factors, and the tissue or fluid they are measured in. Recently the technology offers the possibility to determine multiple cytokine expressions simultaneously, providing valuable information relating to each cytokine under test and possible associations between CSF and serum cytokines. Considering the limitation of knowledge regarding the immune mechanisms involved in hypocretin deficiency NC, we aimed to (1) investigate peripheral (serum) and central (CSF) characteristic cytokine profile in patients with NC in comparison to controls, and to analyze (2) the effect of age, duration of disease, and symptoms severity on the cytokine levels.

We showed some evidence for alterations in the cytokine profile in patients with narcolepsy–cataplexy compared to controls in both serum and CSF, with the potential role of IL-4 and significant Th1/2 imbalance in NC pathophysiology. Further research on the role of inflammation and investigations of CSF and serum cytokines is required to confirm the present results and to better understand the role of the extensive cytokine network in NC especially at disease onset.