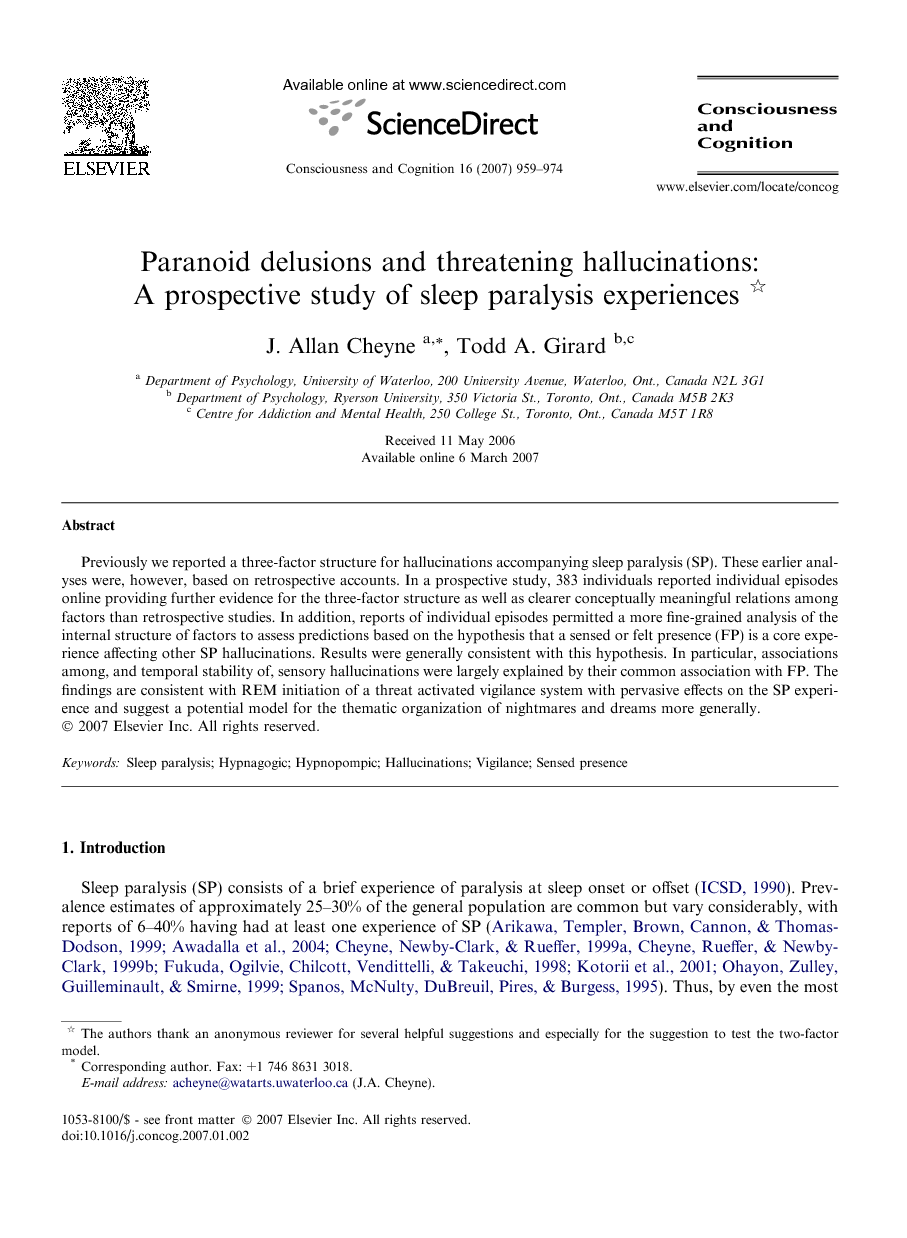 Previously we reported a three-factor structure for hallucinations accompanying sleep paralysis (SP). These earlier analyses were, however, based on retrospective accounts. In a prospective study, 383 individuals reported individual episodes online providing further evidence for the three-factor structure as well as clearer conceptually meaningful relations among factors than retrospective studies. In addition, reports of individual episodes permitted a more fine-grained analysis of the internal structure of factors to assess predictions based on the hypothesis that a sensed or felt presence (FP) is a core experience affecting other SP hallucinations. Results were generally consistent with this hypothesis. In particular, associations among, and temporal stability of, sensory hallucinations were largely explained by their common association with FP. The findings are consistent with REM initiation of a threat activated vigilance system with pervasive effects on the SP experience and suggest a potential model for the thematic organization of nightmares and dreams more generally.

Sleep paralysis (SP) consists of a brief experience of paralysis at sleep onset or offset (ICSD, 1990). Prevalence estimates of approximately 25–30% of the general population are common but vary considerably, with reports of 6–40% having had at least one experience of SP (Arikawa et al., 1999, Awadalla et al., 2004, Cheyne et al., 1999a, Cheyne et al., 1999b, Fukuda et al., 1998, Kotorii et al., 2001, Ohayon et al., 1999 and Spanos et al., 1995). Thus, by even the most conservative estimates, SP hallucinations are remarkably common anomalous experiences. Compelling affective and sensory experiences frequently accompany SP, although individuals vary considerably in terms of number, intensity, and frequency of such experiences (Buzzi and Cirignotta, 2000, Cheyne, 2005, Cheyne et al., 1999a, Fukuda et al., 1998 and Ohayon et al., 1999). SP hallucinations appear to be much more likely to be frightening than conventional dreams (Parker & Blackmore, 2002), essentially constituting a waking nightmare (Cheyne et al., 1999b). Indeed, it is evident that early medical and scholarly writing on the nightmare (e.g., MacNish, 1834 and Waller, 1812) clearly and unambiguously describes SP hallucinations as prototypical nightmares (Harris, 2004 and Liddon, 1967). Our previous research has provided consistent evidence that the majority of SP experiences fall into three major categories: Intruder, Incubus, and Vestibular–Motor (V–M) experiences (Cheyne et al., 1999b). We have now replicated this three-factor structure in several large samples varying in age, frequency of SP experience, and a variety of demographic variables (Cheyne, 2003 and Cheyne, 2005). In addition, Intruder and V–M hallucinations have been found to be differently lateralized (Girard & Cheyne, 2004) and to have different spatial attributes (Cheyne & Girard, 2004).

The present analysis of hallucinations using individual episodes with relatively brief delays in reporting generally corroborated and made more specific findings reported from general surveys. The episodic findings appear to be even clearer and more robust than earlier findings, likely because of the minimizing of omissions from forgetting and conflation of experiences across different episodes. In addition, episodic analysis made more meaningful the analysis of the internal structure of the major categories of SP hallucination as well as the testing of specific hypotheses of the potential role of the FP in affecting hallucinations in several sensory modalities. This latter finding is consistent with the view that the hallucination of a threatening intruder is the result of a secondary conceptual integration of sensory modalities. Episodic analysis also permitted the analysis of consistency and variability over episodes and, with a sufficient number of episodes, future studies will be able to more systematically sort out person and episode variance. The relatively high frequency of SP episodes among chronic experiments also opens up the possibility to induce SP experimentally and to manipulate conditions and contexts of SP experiences (cf. Takeuchi et al., 1992). Understanding the relations among the components of SP hallucinatory experiences has contributed, and will continue to contribute, to the understanding of the structure, generation, and elaboration of dreams, hallucinatory experiences, and human experience more generally.