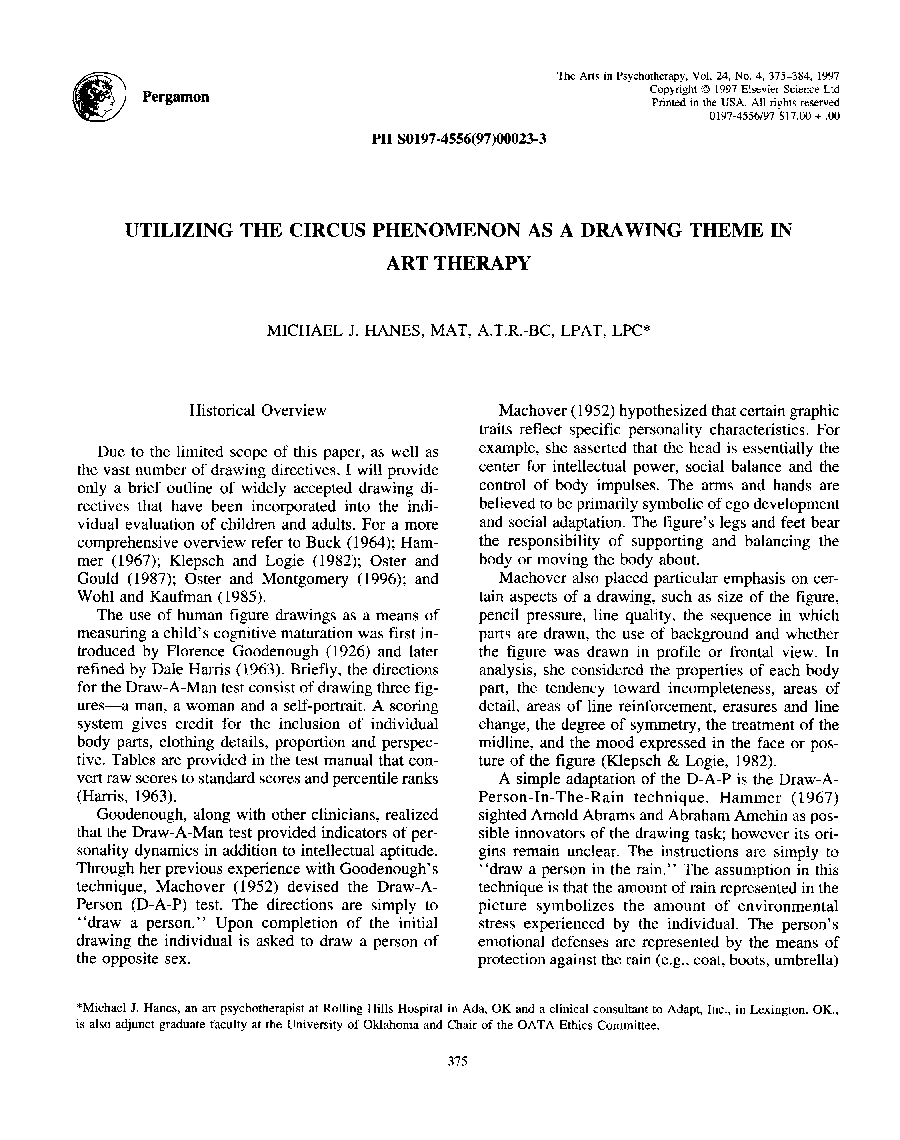 Pergamon The Arts in Psychotherapy, Vol. 24, No. 4, 375-384, 1997 Copyright 0 1997 Elsevier Science Ltd Printed in the USA. All rights reserved 0197.4556/97 517.00 + .oO PI1 SO197-4556(97)00023-3 UTILIZING THE CIRCUS PHENOMENON AS A DRAWING THEME IN ART THERAPY MICHAEL J. HANES, MAT, A.T.R.-BC, LPAT, LPC” Historical Overview Due to the limited scope of this paper, as well as the vast number of drawing directives, I will provide only a brief outline of widely accepted drawing di- rectives that have been incorporated into the indi- vidual evaluation of children and adults. For a more comprehensive overview refer to Buck (1964); Ham- mer (1967); Klepsch and Logie (1982); Oster and Gould (1987); Oster and Montgomery (1996); and Wohl and Kaufman (1985). The use of human figure drawings as a means of measuring a child’s cognitive maturation was first in- troduced by Florence Goodenough (1926) and later refined by Dale Harris (1963). Briefly, the directions for the Draw-A-Man test consist of drawing three fig- ures-a man, a woman and a self-portrait. A scoring system gives credit for the inclusion of individual body parts, clothing details, proportion and perspec- tive. Tables are provided in the test manual that con- vert raw scores to standard scores and percentile ranks (Harris, 1963). Goodenough, along with other clinicians, realized that the Draw-A-Man test provided indicators of per- sonahty dynamics in addition to intellectual aptitude. Through her previous experience with Goodenough’s technique, Machover (1952) devised the Draw-A- Person (D-A-P) test. The directions are simply to “draw a person.” Upon completion of the initial drawing the individual is asked to draw a person of the opposite sex. Machover (1952) hypothesized that certain graphic traits reflect specific personality characteristics. For example, she asserted that the head is essentially the center for intellectual power, social balance and the control of body impulses. The arms and hands are believed to be primarily symbolic of ego development and social adaptation. The figure’s legs and feet bear the responsibility of supporting and balancing the body or moving the body about. Machover also placed particular emphasis on cer- tain aspects of a drawing, such as size of the figure, pencil pressure, line quality, the sequence in which parts are drawn, the use of background and whether the figure was drawn in profile or frontal view. In analysis, she considered the properties of each body part, the tendency toward incompleteness, areas of detail, areas of line reinforcement, erasures and line change, the degree of symmetry, the treatment of the midline, and the mood expressed in the face or pos- ture of the figure (KIepsch & Logie, 1982). A simple adaptation of the D-A-P is the Draw-A- Person-In-The-Rain technique. Hammer (1967) sighted Arnold Abrams and Abraham Amchin as pos- sible innovators of the drawing task; however its ori- gins remain unclear. The instructions are simply to “draw a person in the rain.” The assumption in this technique is that the amount of rain represented in the picture symbolizes the amount of environmental stress experienced by the individual. The person’s emotional defenses are represented by the means of protection against the rain (e.g., coat, boots, umbrella) *Michael J. Hanes, an art psychotherapist at Rolling Hills Hospital in Ada, OK and a clinical consultant to Adapt, Inc., in Lexington, OK., is also adjunct graduate faculty at the University of Oklahoma and Chair of the OATA Ethics Committee. 315