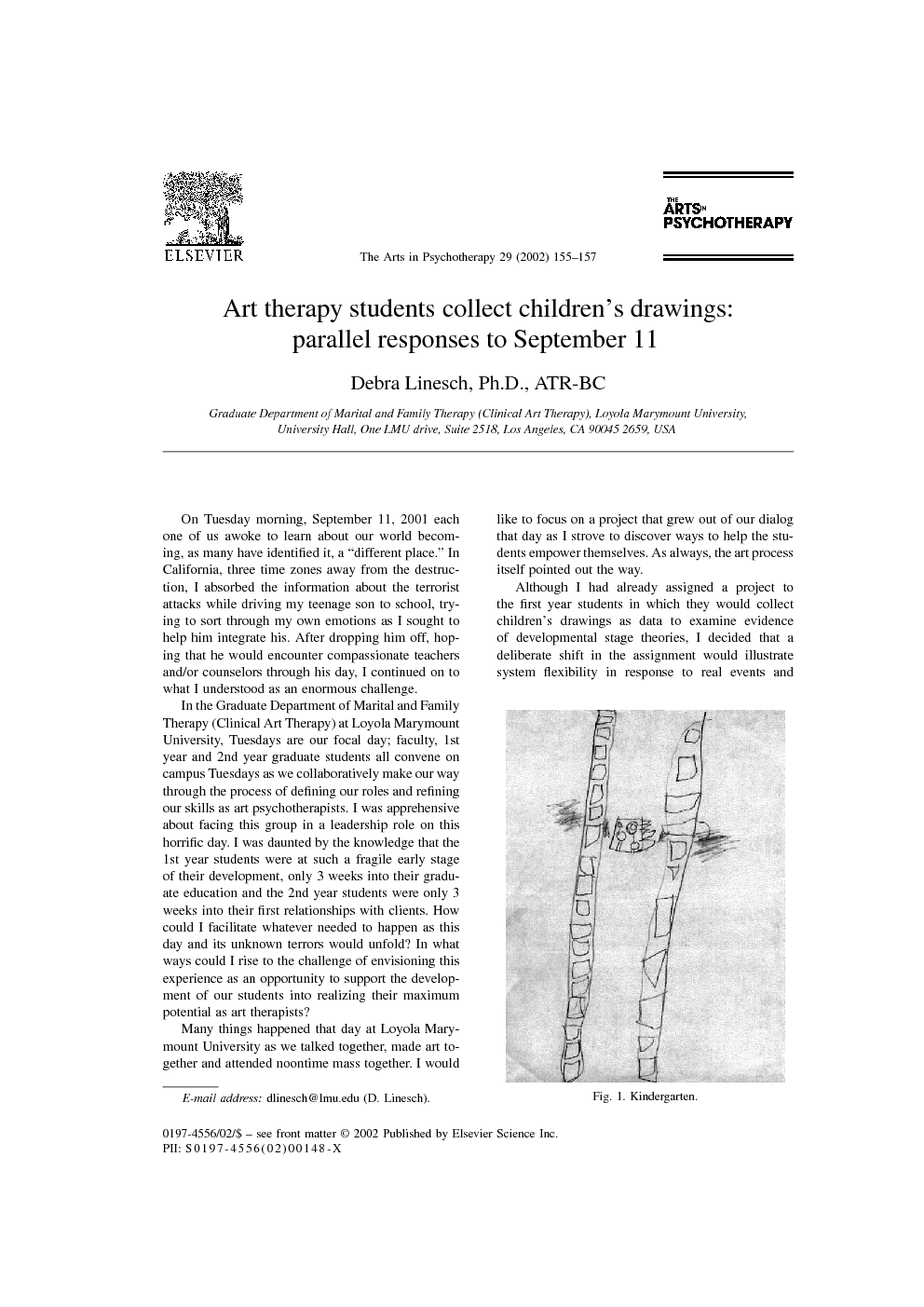 On Tuesday morning, September 11, 2001 each one of us awoke to learn about our world becoming, as many have identified it, a “different place.” In California, three time zones away from the destruction, I absorbed the information about the terrorist attacks while driving my teenage son to school, trying to sort through my own emotions as I sought to help him integrate his. After dropping him off, hoping that he would encounter compassionate teachers and/or counselors through his day, I continued on to what I understood as an enormous challenge. In the Graduate Department of Marital and Family Therapy (Clinical Art Therapy) at Loyola Marymount University, Tuesdays are our focal day; faculty, 1st year and 2nd year graduate students all convene on campus Tuesdays as we collaboratively make our way through the process of defining our roles and refining our skills as art psychotherapists. I was apprehensive about facing this group in a leadership role on this horrific day. I was daunted by the knowledge that the 1st year students were at such a fragile early stage of their development, only 3 weeks into their graduate education and the 2nd year students were only 3 weeks into their first relationships with clients. How could I facilitate whatever needed to happen as this day and its unknown terrors would unfold? In what ways could I rise to the challenge of envisioning this experience as an opportunity to support the development of our students into realizing their maximum potential as art therapists? Many things happened that day at Loyola Marymount University as we talked together, made art together and attended noontime mass together. I would like to focus on a project that grew out of our dialog that day as I strove to discover ways to help the students empower themselves. As always, the art process itself pointed out the way. Although I had already assigned a project to the first year students in which they would collect children’s drawings as data to examine evidence of developmental stage theories, I decided that a deliberate shift in the assignment would illustrate system flexibility in response to real events and provide them with structure to facilitate post September 11 self-expressions. I quickly contacted a local elementary school that had classes from kindergarten through eighth grade and in dialog with the principal, scheduled a day when all 22 1st year students would be able to ask the children to make drawings about their worlds. The students and I carefully discussed how we would request the drawings and decided to be as open ended as possible, accepting all drawing topics but clearly giving the students an opportunity to talk about recent events. Before meeting in the classrooms with the children, the 22 graduate students and I listened to the school counselors naively reassure us that the children were unscathed by the terrorism and, since their parents had been instructed not to let the children watch television, unaware of details. Armed with this information, the graduate students encountered the children and in the art making process, something incredible happened. The graduate students learned about the power of art making and the children learned about the power of communication. Despite being told that the children were “unaware,” despite very open ended art directives and despite authoritarian classroom discipline styles, the art that emerged spoke from aching hearts and minds to attending hearts and minds. The images that follow illustrate the voices of children from age 4 to 14 (Fig. 1, Fig. 2, Fig. 3, Fig. 4, Fig. 5 and Fig. 6).