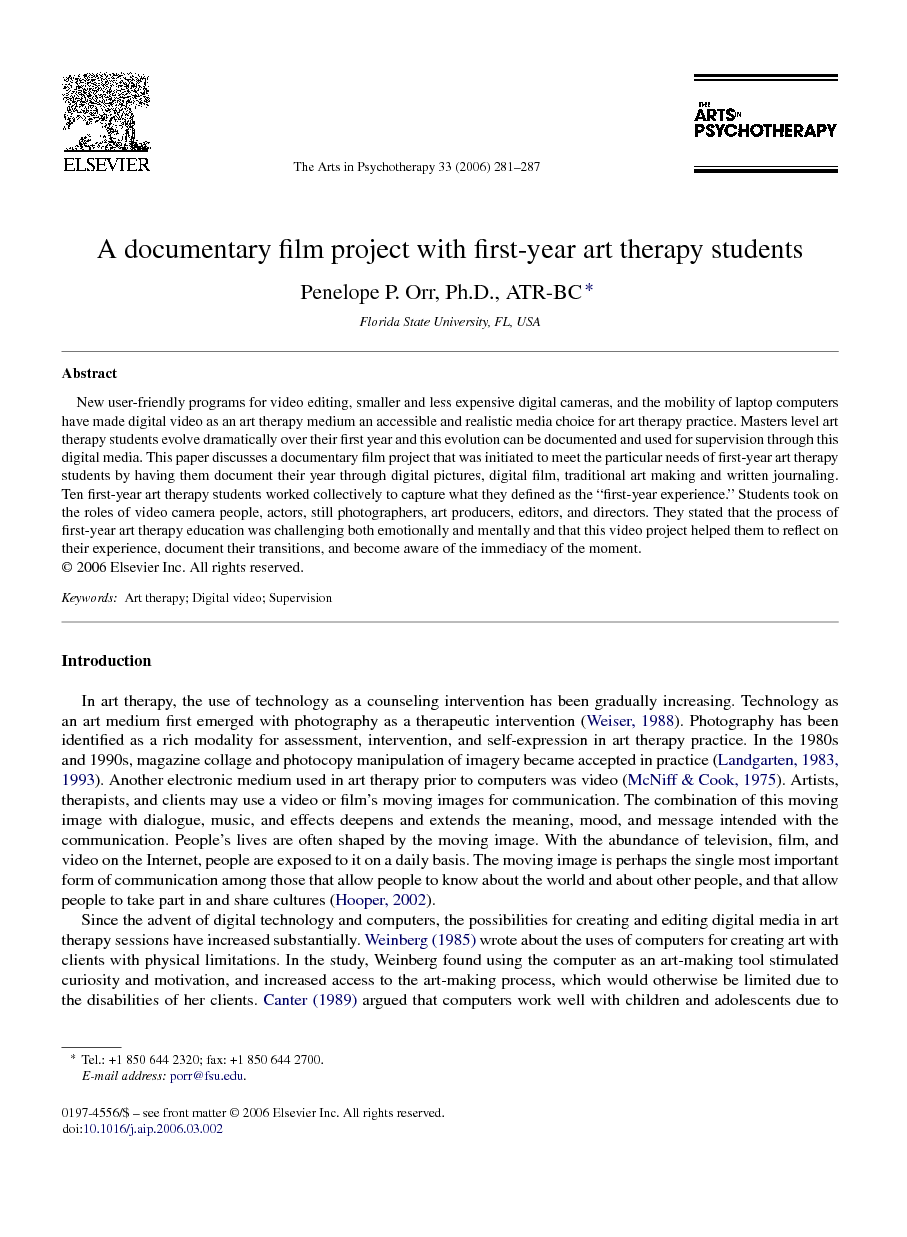 New user-friendly programs for video editing, smaller and less expensive digital cameras, and the mobility of laptop computers have made digital video as an art therapy medium an accessible and realistic media choice for art therapy practice. Masters level art therapy students evolve dramatically over their first year and this evolution can be documented and used for supervision through this digital media. This paper discusses a documentary film project that was initiated to meet the particular needs of first-year art therapy students by having them document their year through digital pictures, digital film, traditional art making and written journaling. Ten first-year art therapy students worked collectively to capture what they defined as the “first-year experience.” Students took on the roles of video camera people, actors, still photographers, art producers, editors, and directors. They stated that the process of first-year art therapy education was challenging both emotionally and mentally and that this video project helped them to reflect on their experience, document their transitions, and become aware of the immediacy of the moment.

Through the analysis of the experience of creating a digital video and the themes and narrative of the video, it was apparent that the unique quality of video for capturing a moment in time using the combination of image, sound, and movement allowed students a full expression of their experience. It is interesting that even though some of the images were moved out of the natural time sequence during the editing process, the narrative still followed a parallel path to their experience. Video media allowed students to quickly get an image down and then to step back and reflect upon what that image or series of images meant, how significant they were, and then decide if they wanted to keep or delete them. Video also allowed the introduction of music, transitions, and special effects in order to enhance of steer the mood of the piece. The multiple-dimensions of this medium helped students to capture a well-developed picture of their experience, to show a progression over time, and to make changes in mood across the piece. Issues that arose during the filming promoted and supported discussions in supervision. Discussions on ethics, consent forms, permission, liability, point of view, trust, interpretation, and media choice were full and rich. These topics were discussed in terms of the film project, students’ sites, clients, and personal feelings, giving students multiple points of view from which to discuss each topic. Caution areas in doing a similar project as part of practicum arise mostly in the management of the project. The story-building process, filming, and planning are very natural to the therapeutic process, but the editing of the film, if not handled well, could sidetrack supervision. First, it is important to start with students who are interested in learning or are already comfortable with digital media. Working with a group on this type of project works well because members are able to take on roles that are most comfortable for them, while at the same time trying roles that aren’t so comfortable. The group format also allows those who are more technologically savvy to do more of the editing, and thus decrease the time needed for learning the program. Those who are not familiar with the program can learn it through watching the editing process and helping make editing decisions. Later, they can be encouraged to work with the program. With eight to ten persons, a similar project can be done by splitting the group into two groups of four. One-half of the group can focus on capturing images while the other can work on editing, and then they can switch places during the next session. If managed well, the process of creating a digital video is exciting and rewarding for the students. The students in this project felt that it was a great experience and helped them understand their own development as art therapists. There is a significant difference between simply telling a student that they have progressed over the semester as an art therapist and the student actually watching that progression on screen.