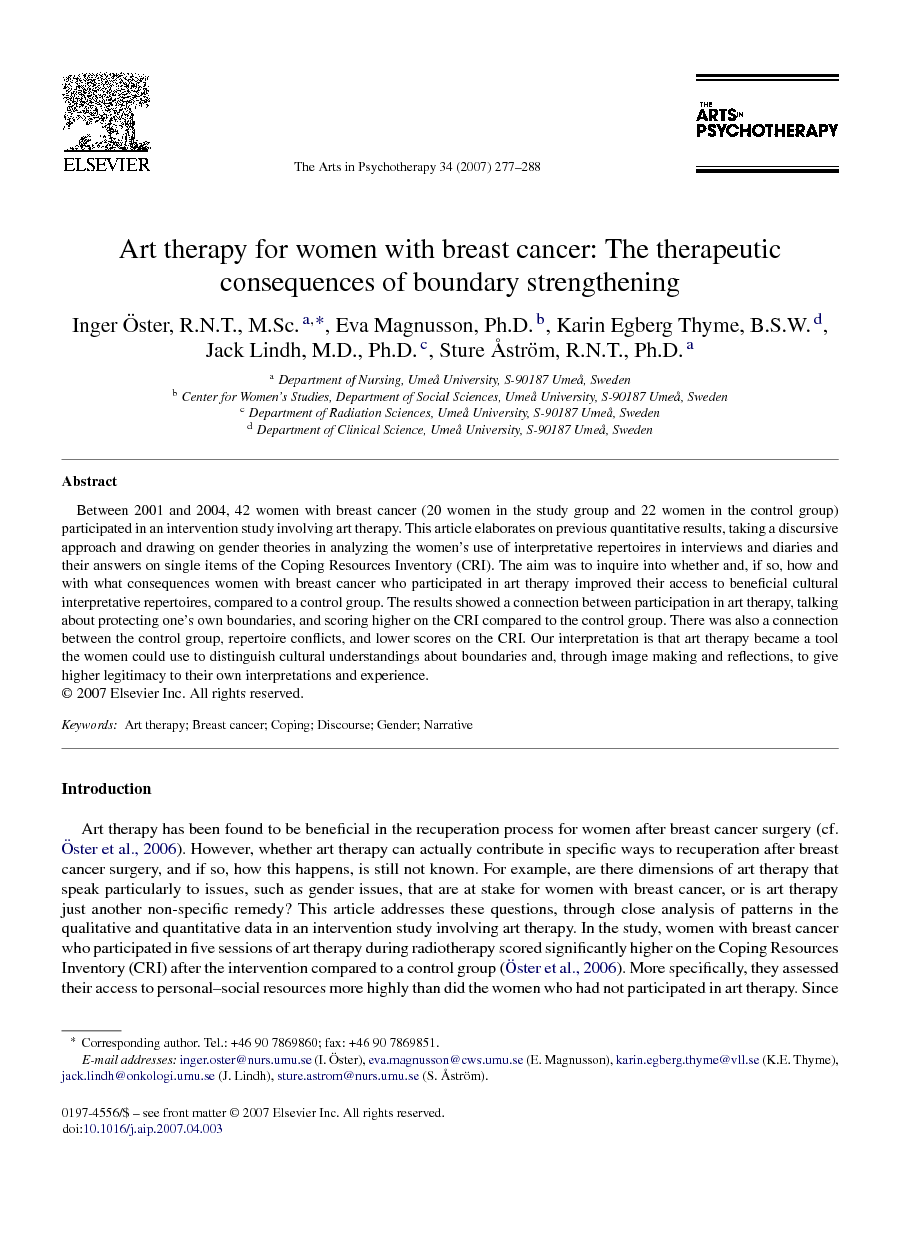 Between 2001 and 2004, 42 women with breast cancer (20 women in the study group and 22 women in the control group) participated in an intervention study involving art therapy. This article elaborates on previous quantitative results, taking a discursive approach and drawing on gender theories in analyzing the women's use of interpretative repertoires in interviews and diaries and their answers on single items of the Coping Resources Inventory (CRI). The aim was to inquire into whether and, if so, how and with what consequences women with breast cancer who participated in art therapy improved their access to beneficial cultural interpretative repertoires, compared to a control group. The results showed a connection between participation in art therapy, talking about protecting one's own boundaries, and scoring higher on the CRI compared to the control group. There was also a connection between the control group, repertoire conflicts, and lower scores on the CRI. Our interpretation is that art therapy became a tool the women could use to distinguish cultural understandings about boundaries and, through image making and reflections, to give higher legitimacy to their own interpretations and experience.

Art therapy has been found to be beneficial in the recuperation process for women after breast cancer surgery (cf. Öster et al., 2006). However, whether art therapy can actually contribute in specific ways to recuperation after breast cancer surgery, and if so, how this happens, is still not known. For example, are there dimensions of art therapy that speak particularly to issues, such as gender issues, that are at stake for women with breast cancer, or is art therapy just another non-specific remedy? This article addresses these questions, through close analysis of patterns in the qualitative and quantitative data in an intervention study involving art therapy. In the study, women with breast cancer who participated in five sessions of art therapy during radiotherapy scored significantly higher on the Coping Resources Inventory (CRI) after the intervention compared to a control group (Öster et al., 2006). More specifically, they assessed their access to personal–social resources more highly than did the women who had not participated in art therapy. Since quantitative data cannot give insight into the actual processes underpinning such assessments, we included several kinds of qualitative data in this study. In the present article, we use a gender–theoretical approach to analyze two kinds of qualitative data from the study (interviews and diaries). We combine these analyses with a closer look at the patterns of CRI scores, comparing women in the art therapy group with those in the control group. The purpose is to start pinpointing specific contributions to helpful processes in the recuperation period after breast cancer surgery that may tentatively be ascribed to art therapy, and to discuss how these contributions may be understood within larger gendered societal patterns. Difficult bodily experiences often do not let themselves be satisfactorily captured in words and verbal forms of therapy. The purpose of art therapy in connection to experiences of trauma, illness, and treatment is to contribute non-verbal ways of enhancing feelings of health and quality of life (Malchiodi, 1999). Within complementary and alternative medicine (CAM), medical art therapy is defined as a mind–body intervention. There is now an increasing body of research on the benefits of art therapy. Below we set out some findings relevant for our study. Generally, art therapy has been shown to help individuals to explore and develop their imagery and pictorial language (Luzzatto, 1998; Luzzatto & Gabriel, 2000). Research on the effects of art therapy has shown reductions in anxiety and depression, lowered levels of stress, and improved self-assessment of global health (Monti et al., 2006; Reynolds, Nabors, & Quinlan, 2000). It has been shown that art therapy in cancer care can increase communication, stimulate processing of traumatic experiences, reduce negative symptoms, and increase feelings of energy (Luzzatto & Gabriel, 2000; Luzzatto, Sereno, & Capps, 2003; Nainis et al., 2006; Ziesler, 1993). Looking specifically at breast cancer, art therapy has been found to help women with breast cancer confront existential questions and experiences of loss, body changes, and relations affecting their identities (Malchiodi, 1997). In other studies, women with breast cancer who participated in art therapy claimed that it helped them express thoughts and feelings (Borgmann, 2002), and to support meaning-making processes (Collie, Bottorff, & Long, 2006; Malchiodi, 1997; Predeger, 1996). The above studies, though inspiring, offer few details about what happens in art therapy to specifically help women with breast cancer, and what actual effects on well-being and coping may accrue. Also, the studies almost entirely devoid of any gender perspective (for a single exception, see Predeger, 1996). This is an exclusion which we find somewhat surprising, considering the specific meanings, myths, and “functions” related to breasts, and thus, breast cancer (Thorne & Murray, 2000; Wilkinson & Kitzinger, 1994). In this article, we apply a discursive approach focusing on patterns of interpretative repertoires in women's narratives. The analytic term “interpretative repertoires” denotes registers of cultural resources that people have access to when making sense of experiences and communicating with others. It is through the study of how people talk about different phenomena and events that researchers can map how narrators use available interpretative repertoires to construct phenomena, events, and themselves (Edley, 2001; Potter & Wetherell, 2001; Taylor, 2001a and Taylor, 2001b; Wetherell, 2001a and Wetherell, 2001b; Wilkinson, 2000). A discursive approach seems particularly relevant, since it has been shown that dominant discourses, or repertoires, relating to breast cancer can be disempowering, as they may limit women's possibilities to construct their own stories (Collie & Long, 2005). Such repertoires are evident in contemporary education and prevention campaigns for women with breast cancer. Much of the discussion is limited to the individual behaviour, lifestyle, and family history (Petersen, 2004). Research on women's handling of their life situation after a breast cancer diagnosis has also often located such handling as lying exclusively within the women. It has promoted an individual psychological perspective with a dominating focus on personality types or coping styles, overlooking a contextual or gender–theoretical framework (Moynihan, 2002). Environmental factors, industrial practices, and gendered social arrangements are often left out (Petersen, 2004). Many educational texts are suffused by a strong Western cultural image of a diagnosis of cancer as a challenge which should lead to “fighting spirit,” “positive thinking,” re-evaluation, and growth (Wilkinson and Kitzinger, 1993, Wilkinson and Kitzinger, 1994 and Wilkinson and Kitzinger, 2000). Breast cancer is culturally associated with visible “female” aspects of the body (Bassett-Smith, 2001 and Broom, 2001; Thorne & Murray, 2000). Historically, women have been advised to “keep” their femininity by concealing the physical signs of cancer treatments (Broom, 2001). Thus, gender issues should not be neglected when studying breast cancer treatment. For instance, gender-insensitive medicalization of women's bodies in connection with a breast cancer diagnosis can curtail access to helpful understandings (Thomas-MacLean, 2004). As illness experiences are mediated by gendered power regulating social relations and constructing social identity, the analyses in this study are informed by gender theory (Crossley, 2000 and Hogan, 2003). Aim The aim of this study was to inquire into whether and, if so, how and with what consequences women with breast cancer who participated in art therapy improved their access to beneficial cultural interpretative repertoires, compared to a control group.

There were systematic patterns in how the women in our study made sense of their experiences after the breast cancer diagnosis. In the narratives about their experiences, three different interpretative repertoires featured prominently. There was navigation between repertoires, but the majority of women clearly favoured one over the others. However, for a few women, repertoire conflict was prominent. In reporting, we have concentrated on the most dominant repertoire for each woman. The repertoires related to (a) gendered boundaries, (b) breast cancer as a challenge and a learning opportunity, and (c) stoicism in the face of adversity. Finally, (d) confusion and uncertainty about adequate repertoires for some women was important enough to warrant its own category in our analysis.