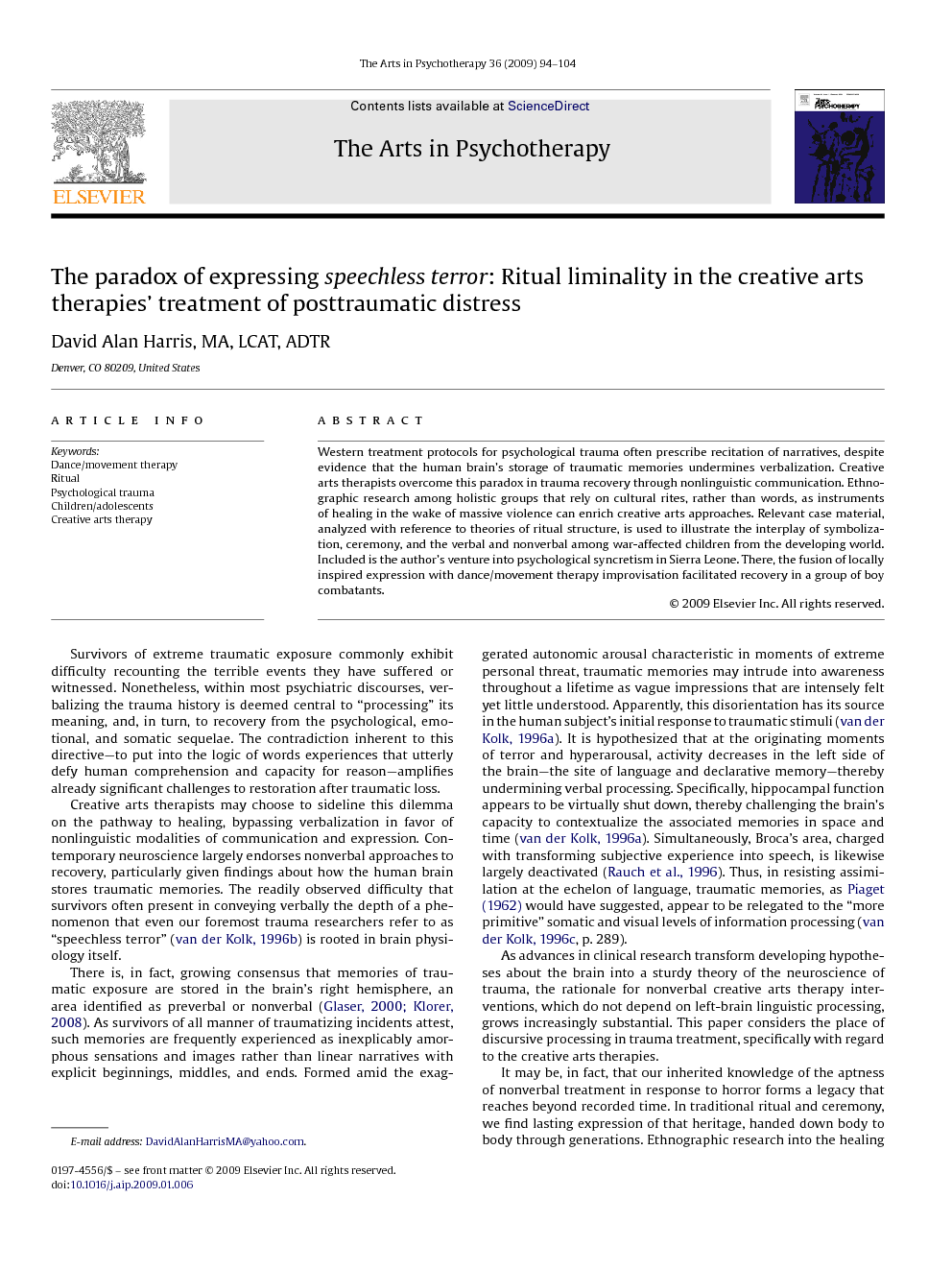 Western treatment protocols for psychological trauma often prescribe recitation of narratives, despite evidence that the human brain's storage of traumatic memories undermines verbalization. Creative arts therapists overcome this paradox in trauma recovery through nonlinguistic communication. Ethnographic research among holistic groups that rely on cultural rites, rather than words, as instruments of healing in the wake of massive violence can enrich creative arts approaches. Relevant case material, analyzed with reference to theories of ritual structure, is used to illustrate the interplay of symbolization, ceremony, and the verbal and nonverbal among war-affected children from the developing world. Included is the author's venture into psychological syncretism in Sierra Leone. There, the fusion of locally inspired expression with dance/movement therapy improvisation facilitated recovery in a group of boy combatants.

Survivors of extreme traumatic exposure commonly exhibit difficulty recounting the terrible events they have suffered or witnessed. Nonetheless, within most psychiatric discourses, verbalizing the trauma history is deemed central to “processing” its meaning, and, in turn, to recovery from the psychological, emotional, and somatic sequelae. The contradiction inherent to this directive—to put into the logic of words experiences that utterly defy human comprehension and capacity for reason—amplifies already significant challenges to restoration after traumatic loss. Creative arts therapists may choose to sideline this dilemma on the pathway to healing, bypassing verbalization in favor of nonlinguistic modalities of communication and expression. Contemporary neuroscience largely endorses nonverbal approaches to recovery, particularly given findings about how the human brain stores traumatic memories. The readily observed difficulty that survivors often present in conveying verbally the depth of a phenomenon that even our foremost trauma researchers refer to as “speechless terror” (van der Kolk, 1996b) is rooted in brain physiology itself. There is, in fact, growing consensus that memories of traumatic exposure are stored in the brain's right hemisphere, an area identified as preverbal or nonverbal (Glaser, 2000 and Klorer, 2008). As survivors of all manner of traumatizing incidents attest, such memories are frequently experienced as inexplicably amorphous sensations and images rather than linear narratives with explicit beginnings, middles, and ends. Formed amid the exaggerated autonomic arousal characteristic in moments of extreme personal threat, traumatic memories may intrude into awareness throughout a lifetime as vague impressions that are intensely felt yet little understood. Apparently, this disorientation has its source in the human subject's initial response to traumatic stimuli (van der Kolk, 1996a). It is hypothesized that at the originating moments of terror and hyperarousal, activity decreases in the left side of the brain—the site of language and declarative memory—thereby undermining verbal processing. Specifically, hippocampal function appears to be virtually shut down, thereby challenging the brain's capacity to contextualize the associated memories in space and time (van der Kolk, 1996a). Simultaneously, Broca's area, charged with transforming subjective experience into speech, is likewise largely deactivated (Rauch et al., 1996). Thus, in resisting assimilation at the echelon of language, traumatic memories, as Piaget (1962) would have suggested, appear to be relegated to the “more primitive” somatic and visual levels of information processing (van der Kolk, 1996c, p. 289). As advances in clinical research transform developing hypotheses about the brain into a sturdy theory of the neuroscience of trauma, the rationale for nonverbal creative arts therapy interventions, which do not depend on left-brain linguistic processing, grows increasingly substantial. This paper considers the place of discursive processing in trauma treatment, specifically with regard to the creative arts therapies. It may be, in fact, that our inherited knowledge of the aptness of nonverbal treatment in response to horror forms a legacy that reaches beyond recorded time. In traditional ritual and ceremony, we find lasting expression of that heritage, handed down body to body through generations. Ethnographic research into the healing practices of cultural groups that do not as a rule rely on verbal processing may prove a fruitful source of inspiration and knowledge for the creative arts therapist who is interested in fusing evidence-based practice with the wisdom of the ages (Harris, 2002). Often informed by such ancestral traditions, the understandings of persons working to promote healing among children affected by war and organized violence in the developing world provide an unusual perspective on this broader dilemma regarding the (in)dispensability of words. Attending to interventions performed at the boundary between the wisdom of timeless traditional cultures of the global South and the neurophysiology-informed psychotherapeutic knowledge of the North may potentially bring insight to a fundamental paradox of healing: the way that, in the aftermath of collective horror, rituals in all the world's regions open up an unspoken and often symbol-laden “speaking” of the unspeakable.