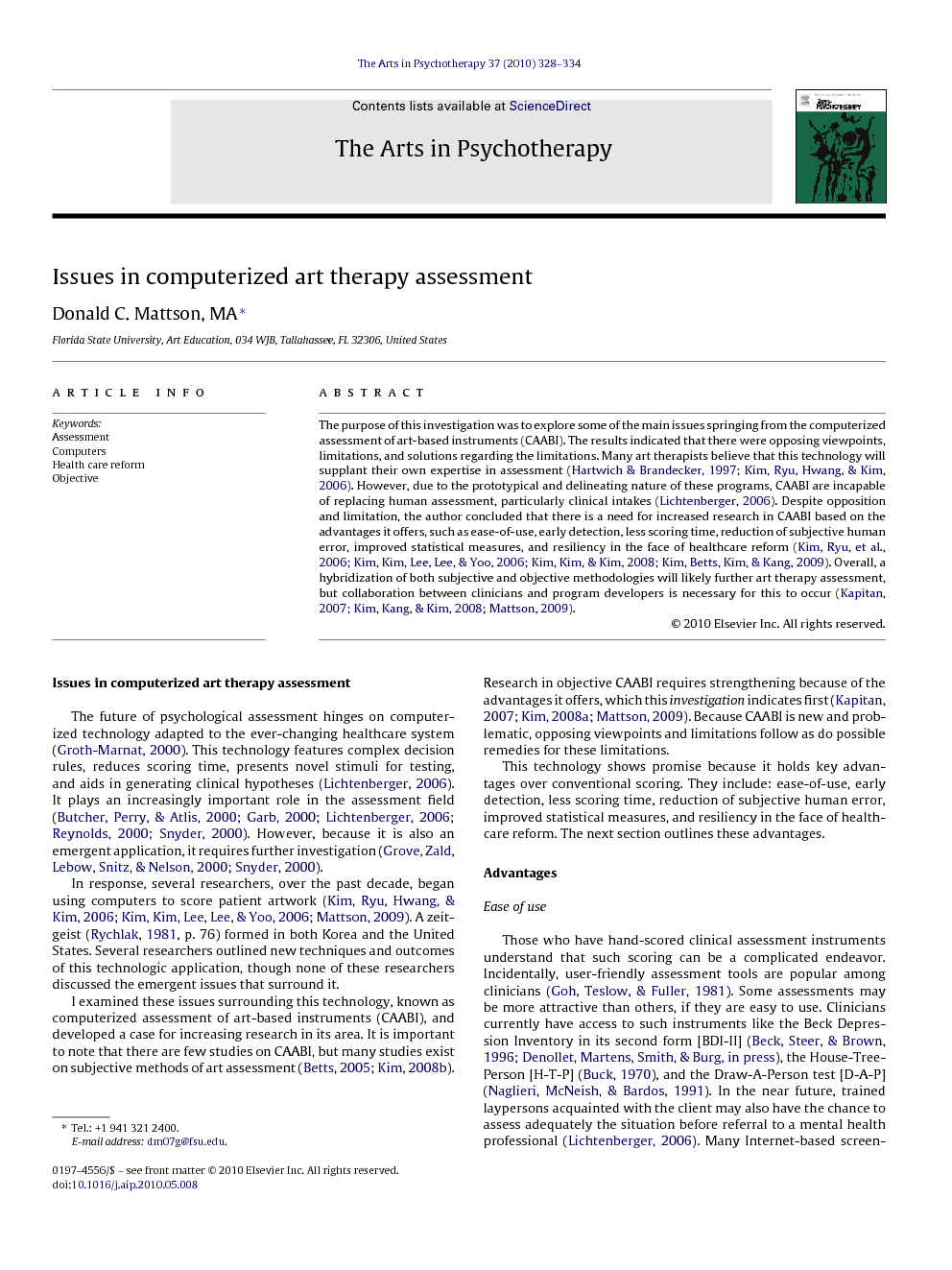 The purpose of this investigation was to explore some of the main issues springing from the computerized assessment of art-based instruments (CAABI). The results indicated that there were opposing viewpoints, limitations, and solutions regarding the limitations. Many art therapists believe that this technology will supplant their own expertise in assessment (Hartwich and Brandecker, 1997 and Kim et al., 2006a). However, due to the prototypical and delineating nature of these programs, CAABI are incapable of replacing human assessment, particularly clinical intakes (Lichtenberger, 2006). Despite opposition and limitation, the author concluded that there is a need for increased research in CAABI based on the advantages it offers, such as ease-of-use, early detection, less scoring time, reduction of subjective human error, improved statistical measures, and resiliency in the face of healthcare reform (Kim et al., 2006a, Kim et al., 2006b, Kim et al., 2008b and Kim et al., 2009a). Overall, a hybridization of both subjective and objective methodologies will likely further art therapy assessment, but collaboration between clinicians and program developers is necessary for this to occur (Kapitan, 2007, Kim et al., 2008a and Mattson, 2009).

The future of psychological assessment hinges on computerized technology adapted to the ever-changing healthcare system (Groth-Marnat, 2000). This technology features complex decision rules, reduces scoring time, presents novel stimuli for testing, and aids in generating clinical hypotheses (Lichtenberger, 2006). It plays an increasingly important role in the assessment field (Butcher et al., 2000, Garb, 2000, Lichtenberger, 2006, Reynolds, 2000 and Snyder, 2000). However, because it is also an emergent application, it requires further investigation (Grove et al., 2000 and Snyder, 2000). In response, several researchers, over the past decade, began using computers to score patient artwork (Kim et al., 2006a, Kim et al., 2006b and Mattson, 2009). A zeitgeist (Rychlak, 1981, p. 76) formed in both Korea and the United States. Several researchers outlined new techniques and outcomes of this technologic application, though none of these researchers discussed the emergent issues that surround it. I examined these issues surrounding this technology, known as computerized assessment of art-based instruments (CAABI), and developed a case for increasing research in its area. It is important to note that there are few studies on CAABI, but many studies exist on subjective methods of art assessment (Betts, 2005 and Kim, 2008b). Research in objective CAABI requires strengthening because of the advantages it offers, which this investigation indicates first ( Kapitan, 2007, Kim, 2008a and Mattson, 2009). Because CAABI is new and problematic, opposing viewpoints and limitations follow as do possible remedies for these limitations. This technology shows promise because it holds key advantages over conventional scoring. They include: ease-of-use, early detection, less scoring time, reduction of subjective human error, improved statistical measures, and resiliency in the face of healthcare reform. The next section outlines these advantages.

This article covered some of the main issues concerning computerized assessment of art-based instruments. These included the various advantages, differing viewpoints, limitations, opposing viewpoints, possible directions for improvement, and a discussion of this technology. Because of the advantages of CAABI, it warrants refinement. Overall, a more productive relationship between clinicians and program developers will help to refine the technology and increase CAABI research. Because the benefits of computerized assessment generally outweigh the disadvantages, more research should occur in the area of CAABI. The clinician should aim for a hybrid between both quantitative and qualitative measures in these instances.