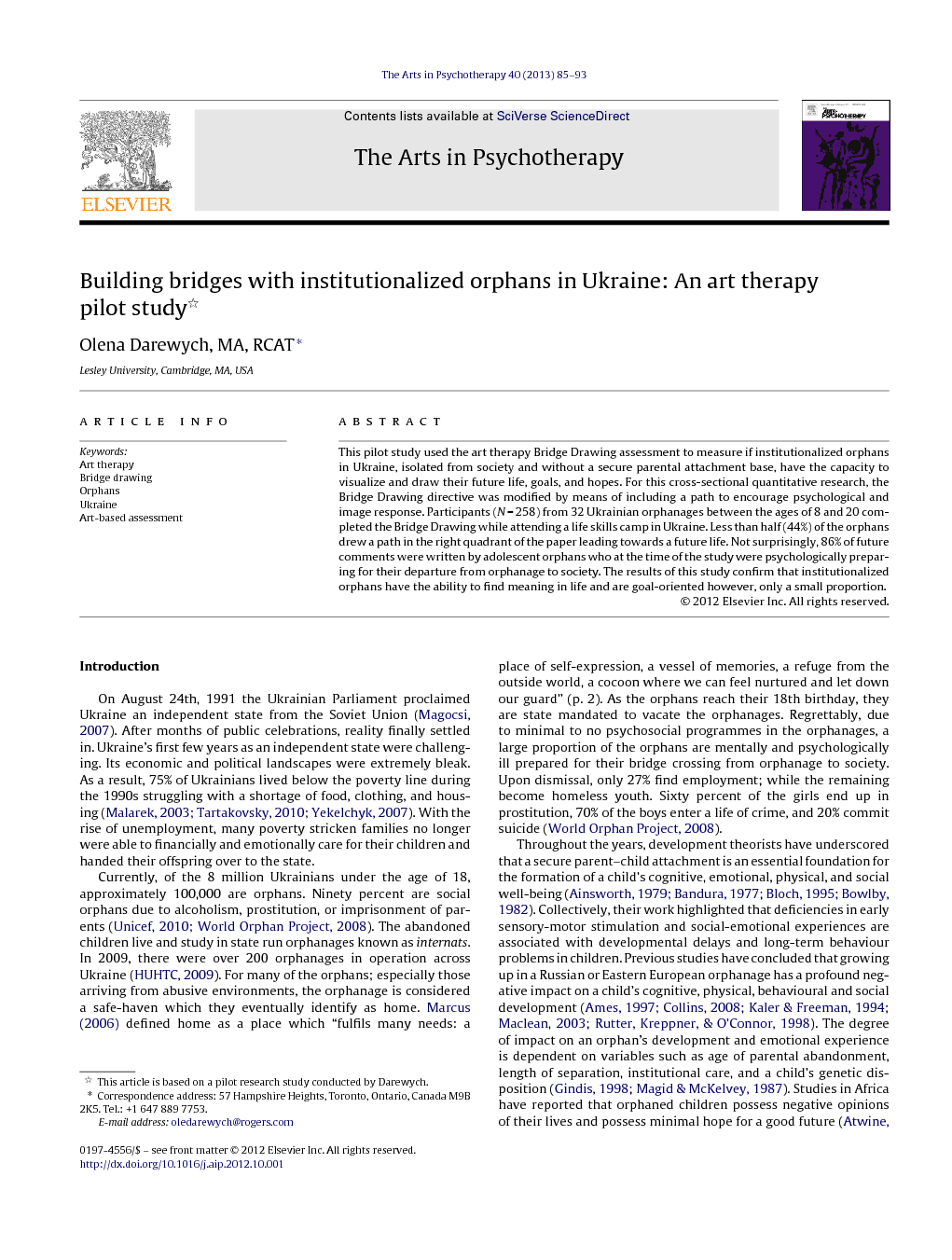 This pilot study used the art therapy Bridge Drawing assessment to measure if institutionalized orphans in Ukraine, isolated from society and without a secure parental attachment base, have the capacity to visualize and draw their future life, goals, and hopes. For this cross-sectional quantitative research, the Bridge Drawing directive was modified by means of including a path to encourage psychological and image response. Participants (N = 258) from 32 Ukrainian orphanages between the ages of 8 and 20 completed the Bridge Drawing while attending a life skills camp in Ukraine. Less than half (44%) of the orphans drew a path in the right quadrant of the paper leading towards a future life. Not surprisingly, 86% of future comments were written by adolescent orphans who at the time of the study were psychologically preparing for their departure from orphanage to society. The results of this study confirm that institutionalized orphans have the ability to find meaning in life and are goal-oriented however, only a small proportion.

On August 24th, 1991 the Ukrainian Parliament proclaimed Ukraine an independent state from the Soviet Union (Magocsi, 2007). After months of public celebrations, reality finally settled in. Ukraine's first few years as an independent state were challenging. Its economic and political landscapes were extremely bleak. As a result, 75% of Ukrainians lived below the poverty line during the 1990s struggling with a shortage of food, clothing, and housing (Malarek, 2003, Tartakovsky, 2010 and Yekelchyk, 2007). With the rise of unemployment, many poverty stricken families no longer were able to financially and emotionally care for their children and handed their offspring over to the state. Currently, of the 8 million Ukrainians under the age of 18, approximately 100,000 are orphans. Ninety percent are social orphans due to alcoholism, prostitution, or imprisonment of parents (Unicef, 2010 and World Orphan Project, 2008). The abandoned children live and study in state run orphanages known as internats. In 2009, there were over 200 orphanages in operation across Ukraine ( HUHTC, 2009). For many of the orphans; especially those arriving from abusive environments, the orphanage is considered a safe-haven which they eventually identify as home. Marcus (2006) defined home as a place which “fulfils many needs: a place of self-expression, a vessel of memories, a refuge from the outside world, a cocoon where we can feel nurtured and let down our guard” (p. 2). As the orphans reach their 18th birthday, they are state mandated to vacate the orphanages. Regrettably, due to minimal to no psychosocial programmes in the orphanages, a large proportion of the orphans are mentally and psychologically ill prepared for their bridge crossing from orphanage to society. Upon dismissal, only 27% find employment; while the remaining become homeless youth. Sixty percent of the girls end up in prostitution, 70% of the boys enter a life of crime, and 20% commit suicide ( World Orphan Project, 2008). Throughout the years, development theorists have underscored that a secure parent–child attachment is an essential foundation for the formation of a child's cognitive, emotional, physical, and social well-being (Ainsworth, 1979, Bandura, 1977, Bloch, 1995 and Bowlby, 1982). Collectively, their work highlighted that deficiencies in early sensory-motor stimulation and social-emotional experiences are associated with developmental delays and long-term behaviour problems in children. Previous studies have concluded that growing up in a Russian or Eastern European orphanage has a profound negative impact on a child's cognitive, physical, behavioural and social development (Ames, 1997, Collins, 2008, Kaler and Freeman, 1994, Maclean, 2003 and Rutter et al., 1998). The degree of impact on an orphan's development and emotional experience is dependent on variables such as age of parental abandonment, length of separation, institutional care, and a child's genetic disposition (Gindis, 1998 and Magid and McKelvey, 1987). Studies in Africa have reported that orphaned children possess negative opinions of their lives and possess minimal hope for a good future (Atwine et al., 2005, Cluver and Gardner, 2006 and Germann, 2002). Logotherapist and Nazi concentration camp survivor Frankl (2006) on the other hand, asserted that individuals under a limited nurturing and nutritional setting and separated from society have the ability to find meaning, hope, and a future in their life. However, not all have the inner capability. In his book Man's Search for Meaning (2006) he stressed that “it is a peculiarity of man that he can only live by looking to the future … and this is his salvation in the most difficult moments of his existence, although he sometimes has to force his mind to the task” (p. 73). What was difficult was that prisoners of WWII concentration camps were unaware of the duration of camp and humans cannot “live for the future or aim at a goal without knowing the exact day of liberation” ( Frankl, 2006, p. 70). Unlike the prisoners, institutionalized orphans in Ukraine are fully aware of their entry day into society and based on Frankl's theory, have the ability to change, live for a good future and aim for personal goals. Research studies have demonstrated the need and importance of exposing orphans of all ages to psychosocial support services and psychotherapeutic treatments such as art therapy for developmental growth, psychological well-being and resiliency (Adams, 2005, Arrington and Yorgin, 2001, Darewych, 2009, Gruendel and Anderson, 1995 and Ivanova, 2004).

The sample consisted of 258 institutionalized orphans between the ages of 8 and 20 from 32 Ukrainian orphanages. Fifty-two percent (52%) of the participants were female and the mean age was 13 (SD = 1.91). In Ukraine, orphans living in orphanage are state mandated to vacate the orphanage at the age of 18. Those with physical challenges are often granted permission to remain for an extended period of time. This explains why two participants age 19 and 20 participated in the study.