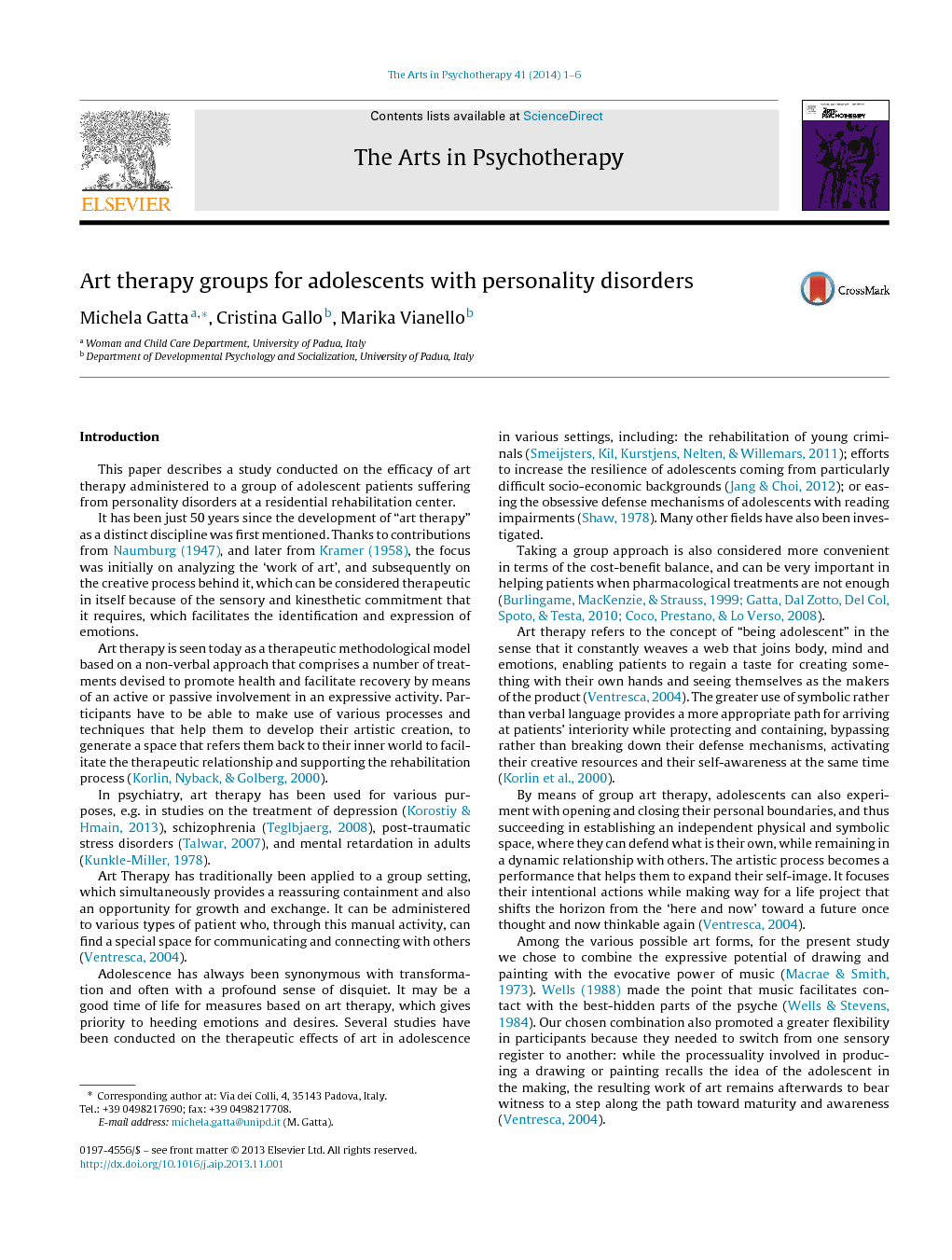 This paper describes a study conducted on the efficacy of art therapy administered to a group of adolescent patients suffering from personality disorders at a residential rehabilitation center. It has been just 50 years since the development of “art therapy” as a distinct discipline was first mentioned. Thanks to contributions from Naumburg (1947), and later from Kramer (1958), the focus was initially on analyzing the ‘work of art’, and subsequently on the creative process behind it, which can be considered therapeutic in itself because of the sensory and kinesthetic commitment that it requires, which facilitates the identification and expression of emotions. Art therapy is seen today as a therapeutic methodological model based on a non-verbal approach that comprises a number of treatments devised to promote health and facilitate recovery by means of an active or passive involvement in an expressive activity. Participants have to be able to make use of various processes and techniques that help them to develop their artistic creation, to generate a space that refers them back to their inner world to facilitate the therapeutic relationship and supporting the rehabilitation process (Korlin, Nyback, & Golberg, 2000). In psychiatry, art therapy has been used for various purposes, e.g. in studies on the treatment of depression (Korostiy & Hmain, 2013), schizophrenia (Teglbjaerg, 2008), post-traumatic stress disorders (Talwar, 2007), and mental retardation in adults (Kunkle-Miller, 1978). Art Therapy has traditionally been applied to a group setting, which simultaneously provides a reassuring containment and also an opportunity for growth and exchange. It can be administered to various types of patient who, through this manual activity, can find a special space for communicating and connecting with others (Ventresca, 2004). Adolescence has always been synonymous with transformation and often with a profound sense of disquiet. It may be a good time of life for measures based on art therapy, which gives priority to heeding emotions and desires. Several studies have been conducted on the therapeutic effects of art in adolescence in various settings, including: the rehabilitation of young criminals (Smeijsters, Kil, Kurstjens, Nelten, & Willemars, 2011); efforts to increase the resilience of adolescents coming from particularly difficult socio-economic backgrounds (Jang & Choi, 2012); or easing the obsessive defense mechanisms of adolescents with reading impairments (Shaw, 1978). Many other fields have also been investigated. Taking a group approach is also considered more convenient in terms of the cost-benefit balance, and can be very important in helping patients when pharmacological treatments are not enough (Burlingame et al., 1999, Gatta et al., 2010 and Lo Coco et al., 2008). Art therapy refers to the concept of “being adolescent” in the sense that it constantly weaves a web that joins body, mind and emotions, enabling patients to regain a taste for creating something with their own hands and seeing themselves as the makers of the product (Ventresca, 2004). The greater use of symbolic rather than verbal language provides a more appropriate path for arriving at patients’ interiority while protecting and containing, bypassing rather than breaking down their defense mechanisms, activating their creative resources and their self-awareness at the same time (Korlin et al., 2000). By means of group art therapy, adolescents can also experiment with opening and closing their personal boundaries, and thus succeeding in establishing an independent physical and symbolic space, where they can defend what is their own, while remaining in a dynamic relationship with others. The artistic process becomes a performance that helps them to expand their self-image. It focuses their intentional actions while making way for a life project that shifts the horizon from the ‘here and now’ toward a future once thought and now thinkable again (Ventresca, 2004). Among the various possible art forms, for the present study we chose to combine the expressive potential of drawing and painting with the evocative power of music (Macrae & Smith, 1973). Wells (1988) made the point that music facilitates contact with the best-hidden parts of the psyche (Wells & Stevens, 1984). Our chosen combination also promoted a greater flexibility in participants because they needed to switch from one sensory register to another: while the processuality involved in producing a drawing or painting recalls the idea of the adolescent in the making, the resulting work of art remains afterwards to bear witness to a step along the path toward maturity and awareness (Ventresca, 2004). The aim of our clinical work was gradually to induce patients to become actively involved, using every opportunity to stimulate the dynamics between participants, so that a number of processes of awareness could be pooled to construct a sense of personal identity and reciprocity, e.g. by recognizing the self and others, and ‘entering into a relationship’ (Ridolfi, Lettieri, Scarpa, Vittoria, & Tarchi, 2012).

This study focused on describing and analyzing the effects of group art therapy in the setting of a residential rehabilitation center for adolescents with personality disorders. The variation in the scores for conflict between the first and second cycles of the art workshops indicates a positive evolution in the adolescents’ relationships within the group and in the therapeutic alliances, testifying to the fact that the cohesion achieved by the group promoted the creation of elements of communication on which to build a positive exchange. The trend shared by the other two subscales, involvement and avoidance, during the second cycle is worth further comment because avoidance (which includes a tendency to deny responsibility, reluctance to deal with questions as a group, and a propensity for conformism) is usually associated with conflict and considered as one of the features of a negative climate, so the fact that avoidance followed the same trend as involvement might appear contradictory. In our opinion, conformism and cohesion are not mutually exclusive group processes: they can interact in generating a greater uniformity amongst the members of a group. The adolescents who were more diffident toward the group and wary of allowing themselves any verbal manifestation of their emotions and interior states presumably resorted to avoidance in order to remain part of the group, communicating through their paintings or drawings the wish to take part and not be excluded. So although we can consider avoidance as a less spontaneous, more controlled form of participation, in the case in point this behavior can nonetheless be seen as having contributed to a global improvement in the group climate, not only accompanying the involvement of other members, but also helping to reduce any conflict. This study has some limitations relating to the lack of any randomization or a control group, and the small size of the sample considered, which makes it impossible to attempt any more advanced statistics. On the other hand, given the major difficulties encountered in dealing with this type of setting and this type of patient, our findings seem important and they fulfill most of the aims of the study established at the baseline. The purpose of the art therapy administered was mainly to help these adolescents emerge from their relational isolation, offering them an alternative to solitude, supporting their capacity to communicate, listen and respect one another. Another aim was to bring out these adolescents’ resources and the analogies in their personal experiences, while leaving their differences and limits in the background, so as to facilitate an exchange of experiences and their integration, which is such a fundamental aspect in the context of the rehabilitation center where these individuals were staying. The expressive activities discussed in this paper seemed to be capable of stimulating the group's subjective, emotional and human features. Sharing their emotional and human experiences helped the participants to develop a group culture, laying the foundations for establishing a shared heritage, a method for accessing new experiences, and for paving the way to change (Bassetti & Pertile, 2012). Especially for some of its members, the group proved to be an important space for working on themselves and sharing with others, as well as helping new arrivals to fit in, as demonstrated by the virtually constant presence of these participants and by a considerable improvement in the group climate in the second cycle. Thus, albeit with its above-mentioned limitations, this study provides evidence that, as part of a compulsory stay in a residential rehabilitation center, our group art therapy activities could have a strongly aggregating value, helping the adolescents involved to combat the sense of solitude and self-centered isolation that often characterizes these patients’ experiences (Ridolfi et al., 2012).