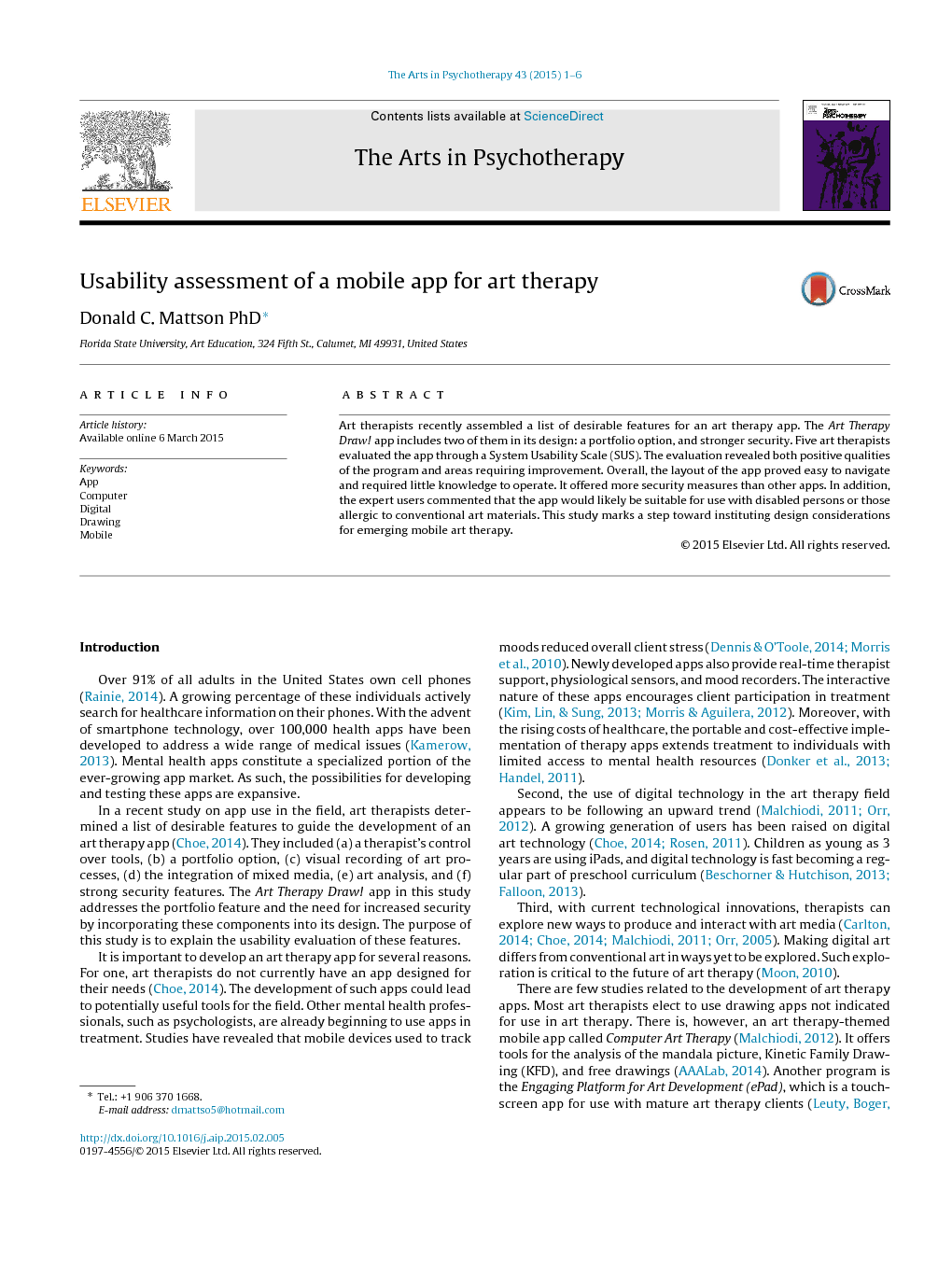 Art therapists recently assembled a list of desirable features for an art therapy app. The Art Therapy Draw! app includes two of them in its design: a portfolio option, and stronger security. Five art therapists evaluated the app through a System Usability Scale (SUS). The evaluation revealed both positive qualities of the program and areas requiring improvement. Overall, the layout of the app proved easy to navigate and required little knowledge to operate. It offered more security measures than other apps. In addition, the expert users commented that the app would likely be suitable for use with disabled persons or those allergic to conventional art materials. This study marks a step toward instituting design considerations for emerging mobile art therapy.

Over 91% of all adults in the United States own cell phones (Rainie, 2014). A growing percentage of these individuals actively search for healthcare information on their phones. With the advent of smartphone technology, over 100,000 health apps have been developed to address a wide range of medical issues (Kamerow, 2013). Mental health apps constitute a specialized portion of the ever-growing app market. As such, the possibilities for developing and testing these apps are expansive. In a recent study on app use in the field, art therapists determined a list of desirable features to guide the development of an art therapy app (Choe, 2014). They included (a) a therapist's control over tools, (b) a portfolio option, (c) visual recording of art processes, (d) the integration of mixed media, (e) art analysis, and (f) strong security features. The Art Therapy Draw! app in this study addresses the portfolio feature and the need for increased security by incorporating these components into its design. The purpose of this study is to explain the usability evaluation of these features. It is important to develop an art therapy app for several reasons. For one, art therapists do not currently have an app designed for their needs (Choe, 2014). The development of such apps could lead to potentially useful tools for the field. Other mental health professionals, such as psychologists, are already beginning to use apps in treatment. Studies have revealed that mobile devices used to track moods reduced overall client stress (Dennis and O’Toole, 2014 and Morris et al., 2010). Newly developed apps also provide real-time therapist support, physiological sensors, and mood recorders. The interactive nature of these apps encourages client participation in treatment (Kim et al., 2013 and Morris and Aguilera, 2012). Moreover, with the rising costs of healthcare, the portable and cost-effective implementation of therapy apps extends treatment to individuals with limited access to mental health resources (Donker et al., 2013 and Handel, 2011). Second, the use of digital technology in the art therapy field appears to be following an upward trend (Malchiodi, 2011 and Orr, 2012). A growing generation of users has been raised on digital art technology (Choe, 2014 and Rosen, 2011). Children as young as 3 years are using iPads, and digital technology is fast becoming a regular part of preschool curriculum (Beschorner and Hutchison, 2013 and Falloon, 2013). Third, with current technological innovations, therapists can explore new ways to produce and interact with art media (Carlton, 2014, Choe, 2014, Malchiodi, 2011 and Orr, 2005). Making digital art differs from conventional art in ways yet to be explored. Such exploration is critical to the future of art therapy (Moon, 2010). There are few studies related to the development of art therapy apps. Most art therapists elect to use drawing apps not indicated for use in art therapy. There is, however, an art therapy-themed mobile app called Computer Art Therapy ( Malchiodi, 2012). It offers tools for the analysis of the mandala picture, Kinetic Family Drawing (KFD), and free drawings ( AAALab, 2014). Another program is the Engaging Platform for Art Development (ePad), which is a touchscreen app for use with mature art therapy clients ( Leuty, Boger, Hoey, & Mihailidis, 2013). This app detects the client's level of engagement during the art making process enabling clinicians to further individualize art therapy tools. One of the initial steps in developing an app is to perform a test of usability (Zhang & Adipat, 2005). A usability evaluation is a test of product design and features according to the feedback of specified users (Rebelo & Soares, 2013, p. 106). This is an important but often neglected precondition for assessing the design and efficiency of software applications (Hamborg et al., 2004 and Nielsen, 1993). The results of usability evaluations conserve resources and reduce overall system errors in the early stages of app development (Dumas and Redish, 1999 and Hamborg et al., 2004). Overview Much of this paper outlines the process of app evaluation during development. The first section describes the theoretical framework of the app's development, along with the tools used in its construction. It then reviews the portfolio and security requirements derived from a previous study. The methods section follows. At the core of the methods is the usability scale and its properties. The methods section also describes the questionnaire, the participants, and the usability scale scoring procedure. A discussion of the results and future directions follows.