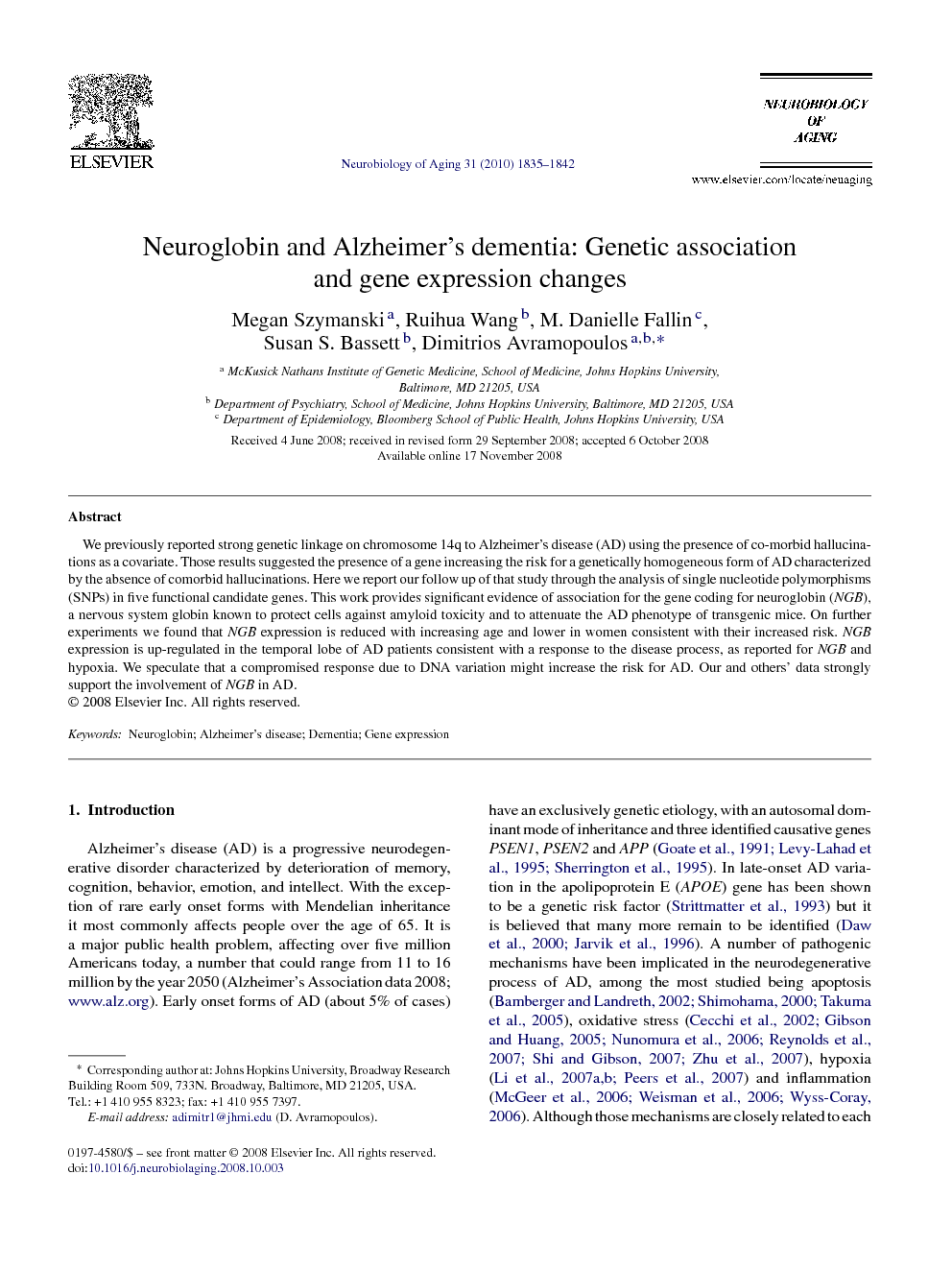 We previously reported strong genetic linkage on chromosome 14q to Alzheimer's disease (AD) using the presence of co-morbid hallucinations as a covariate. Those results suggested the presence of a gene increasing the risk for a genetically homogeneous form of AD characterized by the absence of comorbid hallucinations. Here we report our follow up of that study through the analysis of single nucleotide polymorphisms (SNPs) in five functional candidate genes. This work provides significant evidence of association for the gene coding for neuroglobin (NGB), a nervous system globin known to protect cells against amyloid toxicity and to attenuate the AD phenotype of transgenic mice. On further experiments we found that NGB expression is reduced with increasing age and lower in women consistent with their increased risk. NGB expression is up-regulated in the temporal lobe of AD patients consistent with a response to the disease process, as reported for NGB and hypoxia. We speculate that a compromised response due to DNA variation might increase the risk for AD. Our and others’ data strongly support the involvement of NGB in AD.

Alzheimer's disease (AD) is a progressive neurodegenerative disorder characterized by deterioration of memory, cognition, behavior, emotion, and intellect. With the exception of rare early onset forms with Mendelian inheritance it most commonly affects people over the age of 65. It is a major public health problem, affecting over five million Americans today, a number that could range from 11 to 16 million by the year 2050 (Alzheimer's Association data 2008; www.alz.org). Early onset forms of AD (about 5% of cases) have an exclusively genetic etiology, with an autosomal dominant mode of inheritance and three identified causative genes PSEN1, PSEN2 and APP ( Goate et al., 1991, Levy-Lahad et al., 1995 and Sherrington et al., 1995). In late-onset AD variation in the apolipoprotein E (APOE) gene has been shown to be a genetic risk factor ( Strittmatter et al., 1993) but it is believed that many more remain to be identified ( Daw et al., 2000 and Jarvik et al., 1996). A number of pathogenic mechanisms have been implicated in the neurodegenerative process of AD, among the most studied being apoptosis ( Bamberger and Landreth, 2002, Shimohama, 2000 and Takuma et al., 2005), oxidative stress ( Cecchi et al., 2002, Gibson and Huang, 2005, Nunomura et al., 2006, Reynolds et al., 2007, Shi and Gibson, 2007 and Zhu et al., 2007), hypoxia ( Li et al., 2007a, Li et al., 2007b and Peers et al., 2007) and inflammation ( McGeer et al., 2006, Weisman et al., 2006 and Wyss-Coray, 2006). Although those mechanisms are closely related to each other, the exact cause–effect relationship that leads to disease remains unknown. In an effort to find the remaining genetic loci contributing to late-onset AD risk, several linkage studies have been performed (Blacker et al., 2003, Kehoe et al., 1999 and Pericak-Vance et al., 2000) and have reported a large number of chromosomal regions potentially harboring risk loci. Although some of these regions appear more consistently in the literature (Bertram and Tanzi, 2004) no gene has been implicated with a certainty similar to that for APOE. In fact, recent genome scans for association have shown that it is unlikely for another locus to exist in the genome bearing a single risk variant with the effect size of APOE ( Waring and Rosenberg, 2008). The lack of consistency and the weak results in both linkage and association studies likely reflect an underlying genetic and allelic heterogeneity. In a previous study, we addressed heterogeneity through the incorporation of covariates in a genome wide linkage analysis and detected strong linkage with a LOD score of 3.91 on chromosome 14q when the presence or absence of hallucinations was considered ( Avramopoulos et al., 2005). Sequencing of multiple patients excluded the presence of mutations in PSEN1, which is located in the same region ( Avramopoulos et al., 2005). Here we report on a follow-up study of genetic association for selected candidate genes in the 14q region that provides significant evidence for the involvement of the neuroglobin gene (NGB), and we further show that NGB has an RNA expression profile that supports its involvement in AD. Our data, in combination with the previous functional studies, make NGB a very interesting candidate as a genetic determinant of AD risk.