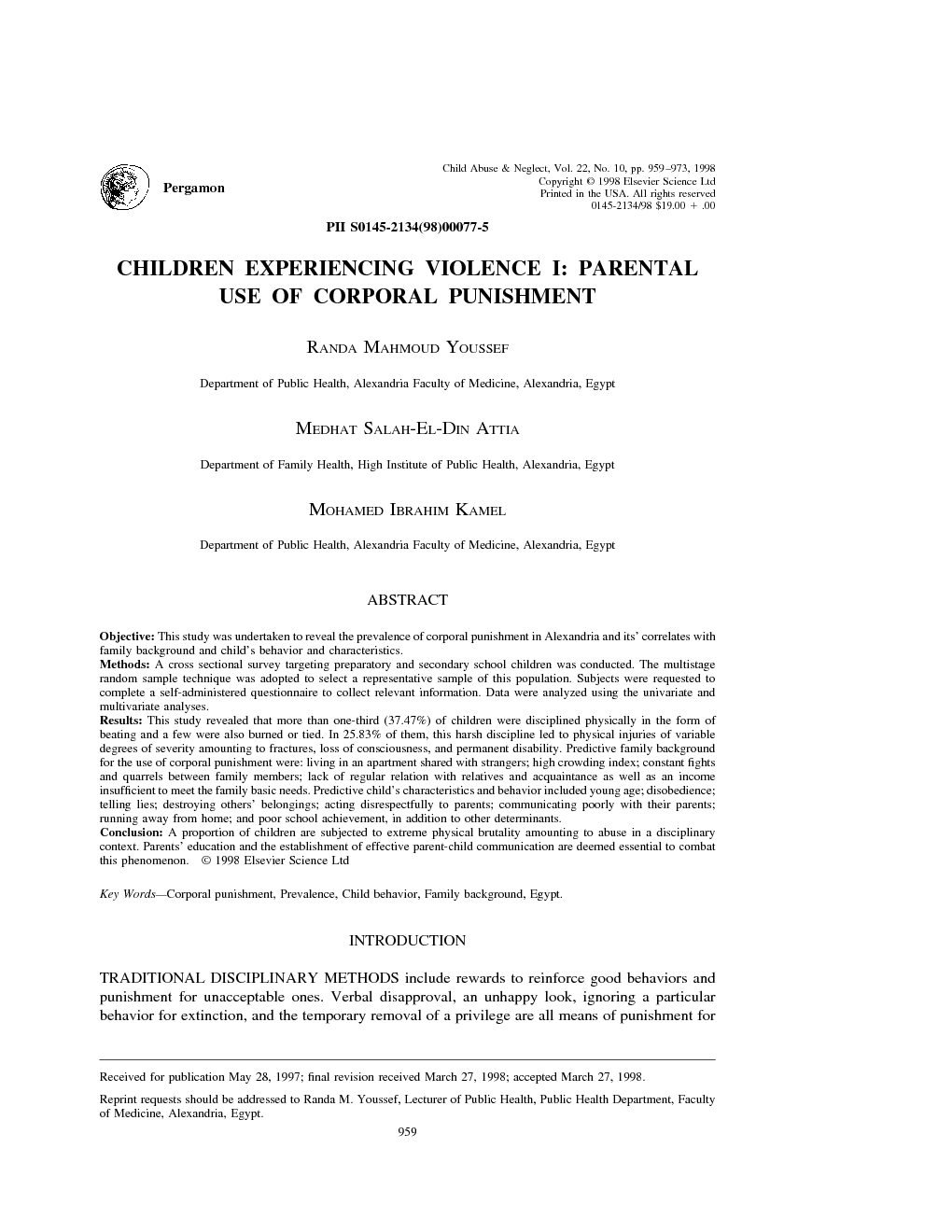 Objective: This study was undertaken to reveal the prevalence of corporal punishment in Alexandria and its’ correlates with family background and child’s behavior and characteristics. Methods: A cross sectional survey targeting preparatory and secondary school children was conducted. The multistage random sample technique was adopted to select a representative sample of this population. Subjects were requested to complete a self-administered questionnaire to collect relevant information. Data were analyzed using the univariate and multivariate analyses. Results: This study revealed that more than one-third (37.47%) of children were disciplined physically in the form of beating and a few were also burned or tied. In 25.83% of them, this harsh discipline led to physical injuries of variable degrees of severity amounting to fractures, loss of consciousness, and permanent disability. Predictive family background for the use of corporal punishment were: living in an apartment shared with strangers; high crowding index; constant fights and quarrels between family members; lack of regular relation with relatives and acquaintance as well as an income insufficient to meet the family basic needs. Predictive child’s characteristics and behavior included young age; disobedience; telling lies; destroying others’ belongings; acting disrespectfully to parents; communicating poorly with their parents; running away from home; and poor school achievement, in addition to other determinants. Conclusion: A proportion of children are subjected to extreme physical brutality amounting to abuse in a disciplinary context. Parents’ education and the establishment of effective parent-child communication are deemed essential to combat this phenomenon.

Traditional disciplinary methods include rewards to reinforce good behaviors and punishment for unacceptable ones. Verbal disapproval, an unhappy look, ignoring a particular behavior for extinction, and the temporary removal of a privilege are all means of punishment for a misbehavior (Leung, Robson, & Lim, 1992). Although rewards are more effective (Leung, Robson, & Lim, 1992) punitive child rearing practices, both verbal and physical still exist (Hemenway, Solnick, & Carter, 1994) Corporal punishment is widely practiced (Wissow & Roter, 1994). In Santiago, Chile, three-fourths of parents tacitly admitted hitting their children (Vargas, Lopez, Perez, Toro, Zuniga, & Ciocca, 1993). This disciplinary mean is not peculiar to developing countries. In the United States of America, over 90% of toddlers are spanked or subjected to other forms of corporal punishment, and almost half the adults recall receiving corporal punishment as children (Straus & Kantor 1994). Even in Switzerland, a socially privileged country, over a third of parents use corporal punishment on their children (Tonella & Zuppinger, 1994). There is no available literature addressing the extent of use of corporal punishment in the Egyptian society. In a culture like ours that values child’s obedience and power assertive discipline, corporal punishment does not seem uncommon. The use of physical punishment is governed by the learned parenting style Leih Mak et al 1983, Muller et al 1995 and Webster-Stratton 1985 and the beliefs in its positive disciplinary effects Corral-Verdugo et al 1995 and Socolar and Stein 1995. Moreover, it appears to be related to family background (Wolfner & Gelles, 1993), social environment Kahn and Fua 1995 and Sumba and Bwibo 1993, economic status Kahn and Fua 1995, McLoyd 1990 and Wolfner and Gelles 1993, as well as the child’s characteristics and behavior Cherian 1994, Engfer and Schneewind 1982, Herrenkhol et al 1983, Smith 1984 and Vargas et al 1993. This study was undertaken to reveal the prevalence of corporal punishment in Alexandria as a means of child discipline, and its correlates with family background as well as a child’s characteristics and behavior.