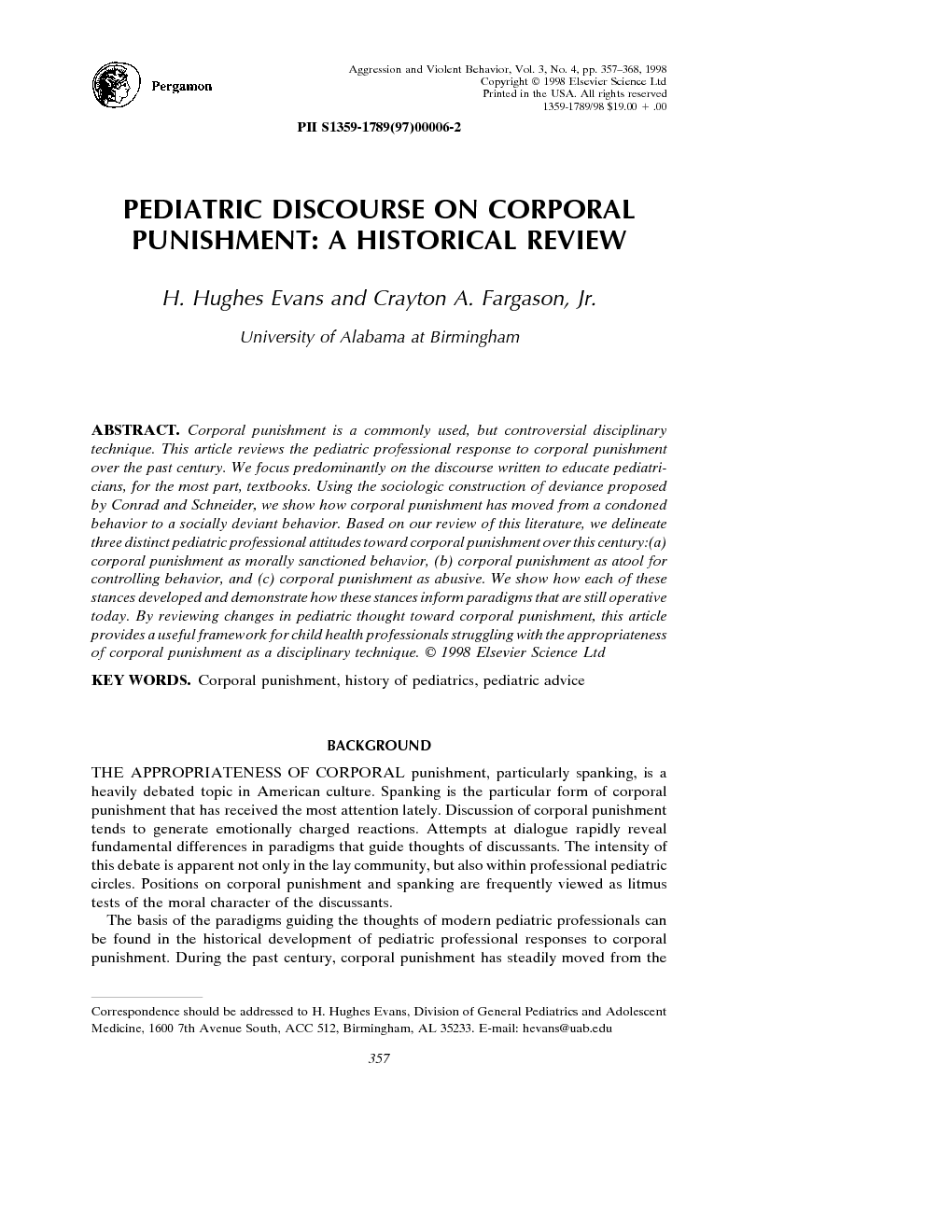 THE APPROPRIATENESS OF CORPORAL punishment, particularly spanking, is a heavily debated topic in American culture. Spanking is the particular form of corporal punishment that has received the most attention lately. Discussion of corporal punishment tends to generate emotionally charged reactions. Attempts at dialogue rapidly reveal fundamental differences in paradigms that guide thoughts of discussants. The intensity of this debate is apparent not only in the lay community, but also within professional pediatric circles. Positions on corporal punishment and spanking are frequently viewed as litmus tests of the moral character of the discussants. The basis of the paradigms guiding the thoughts of modern pediatric professionals can be found in the historical development of pediatric professional responses to corporal punishment. During the past century, corporal punishment has steadily moved from the purview of religion, family, and school to include the realm of the pediatrician. Pediatric practitioners have fostered this shift by conceptualizing child development as a biologic phenomenon, not just a moral one, and by bringing the response to violence against children into their professional and scientific agenda. This has generated a professional debate over where the boundaries between acceptable and unacceptable modes of child discipline should be drawn. This article describes the development of competing pediatric paradigms related to corporal punishment by reviewing references to corporal punishment and spanking in the pediatric literature over the past 100 years. We focus predominantly on the discourse written to educate pediatricians—for the most part in textbooks.1 We highlight three stances in this literature in order to demonstrate how the pediatric response to corporal punishment has changed over the past century. These stances are: (a) spanking as morally sanctioned, (b) spanking as a tool for controlling behavior, and (c) spanking as abusive. Although we discuss them as distinct entities, these stances often coexist. While one position may have held more persuasive power at a certain time, alternative positions continued to be expressed. We conclude by demonstrating that these stances inform paradigms still operative today. This article highlights the roots of problems physicians confront as they attempt to address issues of family violence and abuse in children. The theoretical framework for this review is the sociologic construction of deviance proposed by Conrad and Schneider (1992). These authors describe the central role that the medical profession has come to play in defining deviant behavior in modern American society. In exploring the nature of deviance, they describe the “… historical, social, and cultural processes whereby individuals, behavior, attitudes, and activities come to be defined as deviant” (p. 17). In particular, the authors focus on the medicalization of the definitions of deviance—a move from what they term badness to sickness. They develop this construct in relation to children, and note how the child development field has contributed to a trend to medicalize definitions of social deviance. In addition, they develop this motif for child abuse and show how the construct of abuse has moved into the medical realm over the past half century. We build on their historical-social constructionist approach by addressing the issue of corporal punishment. Corporal punishment is an interesting example of socially constructed deviance, precisely because it has moved from a condoned behavior to a socially deviant behavior. The pediatric literature marks the transition of corporal punishment from a normative behavior justified by a moral imperative, to efforts to define corporal punishment as socially deviant. We show how in the process discipline was subsumed under the pediatrician’s aegis. The pediatric literature has tended to progress from viewing corporal punishment as normative to condemning corporal punishment over the course of the century. However, the debate is by no means over, and some practitioners continue to argue for the appropriateness of corporal punishment. Although we describe a sequential development of concern about the appropriateness of corporal punishment, we acknowledge competing paradigms. We do not attempt to define which viewpoint is most effective and professionally appropriate. Rather, our approach is a review of the development of pediatric thought. Pediatric discussions of corporal punishment also offer the opportunity to investigate other interesting historical developments in the pediatric field, including the movement of social control from the family to professional groups and the rise of the developmental perspective in understanding children. These transitions have important implications for workers interested in the impact of violence on children.