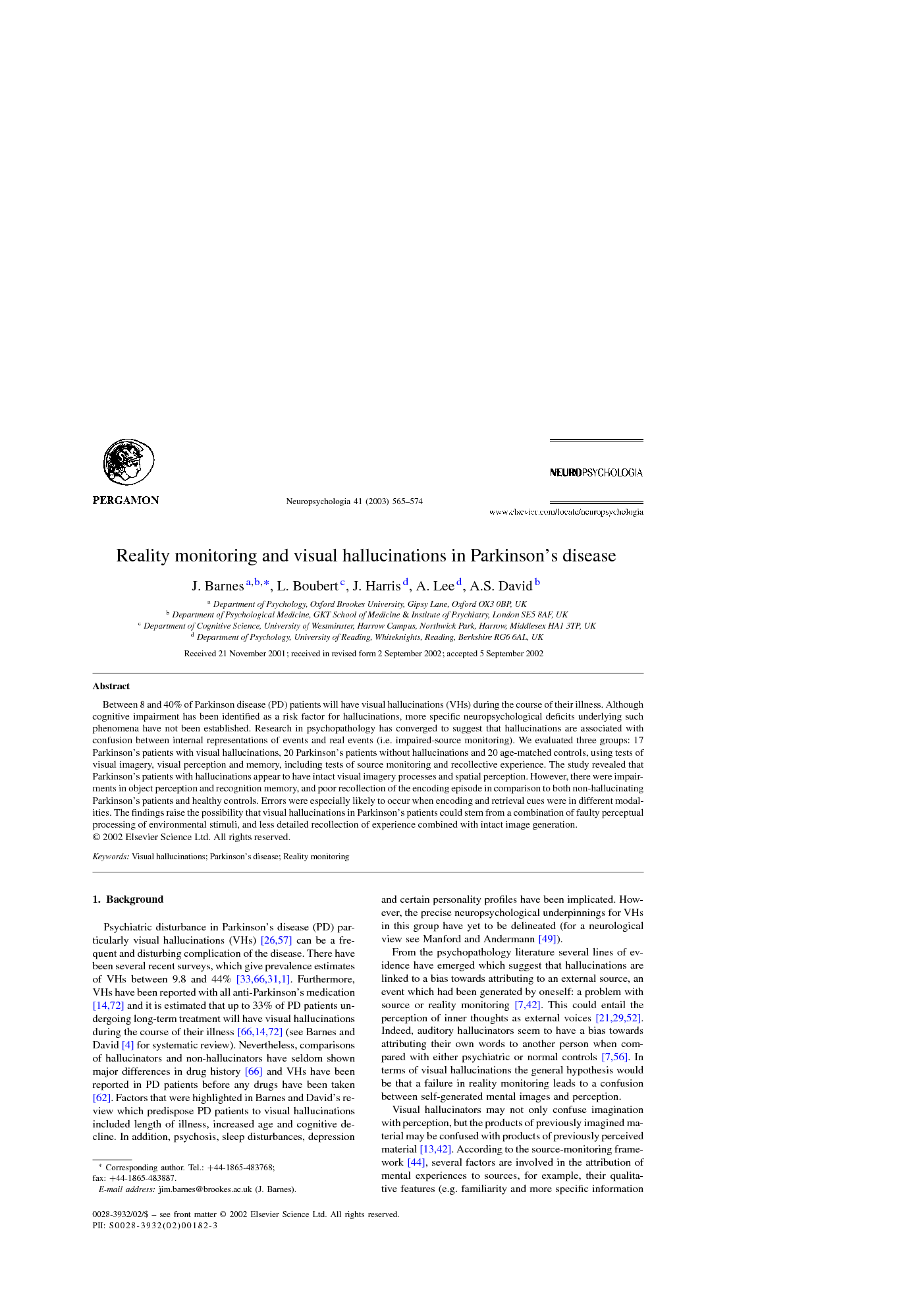 Psychiatric disturbance in Parkinson’s disease (PD) particularly visual hallucinations (VHs) [26] and [57] can be a frequent and disturbing complication of the disease. There have been several recent surveys, which give prevalence estimates of VHs between 9.8 and 44% [33], [66], [31] and [1]. Furthermore, VHs have been reported with all anti-Parkinson’s medication [14] and [72] and it is estimated that up to 33% of PD patients undergoing long-term treatment will have visual hallucinations during the course of their illness [66], [14] and [72] (see Barnes and David [4] for systematic review). Nevertheless, comparisons of hallucinators and non-hallucinators have seldom shown major differences in drug history [66] and VHs have been reported in PD patients before any drugs have been taken [62]. Factors that were highlighted in Barnes and David’s review which predispose PD patients to visual hallucinations included length of illness, increased age and cognitive decline. In addition, psychosis, sleep disturbances, depression and certain personality profiles have been implicated. However, the precise neuropsychological underpinnings for VHs in this group have yet to be delineated (for a neurological view see Manford and Andermann [49]). From the psychopathology literature several lines of evidence have emerged which suggest that hallucinations are linked to a bias towards attributing to an external source, an event which had been generated by oneself: a problem with source or reality monitoring [7] and [42]. This could entail the perception of inner thoughts as external voices [21], [29] and [52]. Indeed, auditory hallucinators seem to have a bias towards attributing their own words to another person when compared with either psychiatric or normal controls [7] and [56]. In terms of visual hallucinations the general hypothesis would be that a failure in reality monitoring leads to a confusion between self-generated mental images and perception. Visual hallucinators may not only confuse imagination with perception, but the products of previously imagined material may be confused with products of previously perceived material [13] and [42]. According to the source-monitoring framework [44], several factors are involved in the attribution of mental experiences to sources, for example, their qualitative features (e.g. familiarity and more specific information such as perceptual and emotional detail), and the criteria one adopts for evaluating such information (e.g. motives, beliefs etc.). Especially important for accurate source attributions is the accurate recollection of specific details. That is, typically, familiarity alone is not a particularly reliable cue to the origin of information. Thus, the less recollection one has of an encoding event, the more that memory is susceptible to misinterpretation, particularly as regards source, hence the risk of subsequent confusion between imaginary and real events. It is known that normal ageing alone can cause deficits in source monitoring [17], [23] and [27] and an over reliance on familiarity [59], [60] and [61]. Accentuation of these deficits plus the addition of others may well be relevant to the susceptibility to VHs in Parkinson’s disease. Another general risk factor for hallucinations, VHs in particular, is sensory impairment [37]. This is most obvious in the Charles Bonnet syndrome which comprises florid realistic hallucinations—similar phenomenologically to those seen in PD [4] and commonly associated with late acquired visual deficits [69] and [73]. Such deficits whether they occur peripherally to centrally may each contribute to VHs [3], [16] and [49] by disinhibiting or “releasing” endogenous imagery processes [68]. In the current study of Parkinson’s patients, we hypothesised that a combination of visual processing deficits [19] and [76] and episodic memory impairment, both found in this group [67], combined with source-monitoring errors, could underlie the propensity to experiencing VHs. In order to test this, we studied PD patients with and without VHs, and age-matched healthy controls. We predicted that there would be differences between the PD group as a whole and the controls in terms of generalised cognitive impairment, but that the hallucinators would show specific deficits in object perception and source monitoring. Furthermore, we argued that for the positive phenomena of hallucinations (perception without an external object [2]), image generation or visual imagery processes would have to be intact.