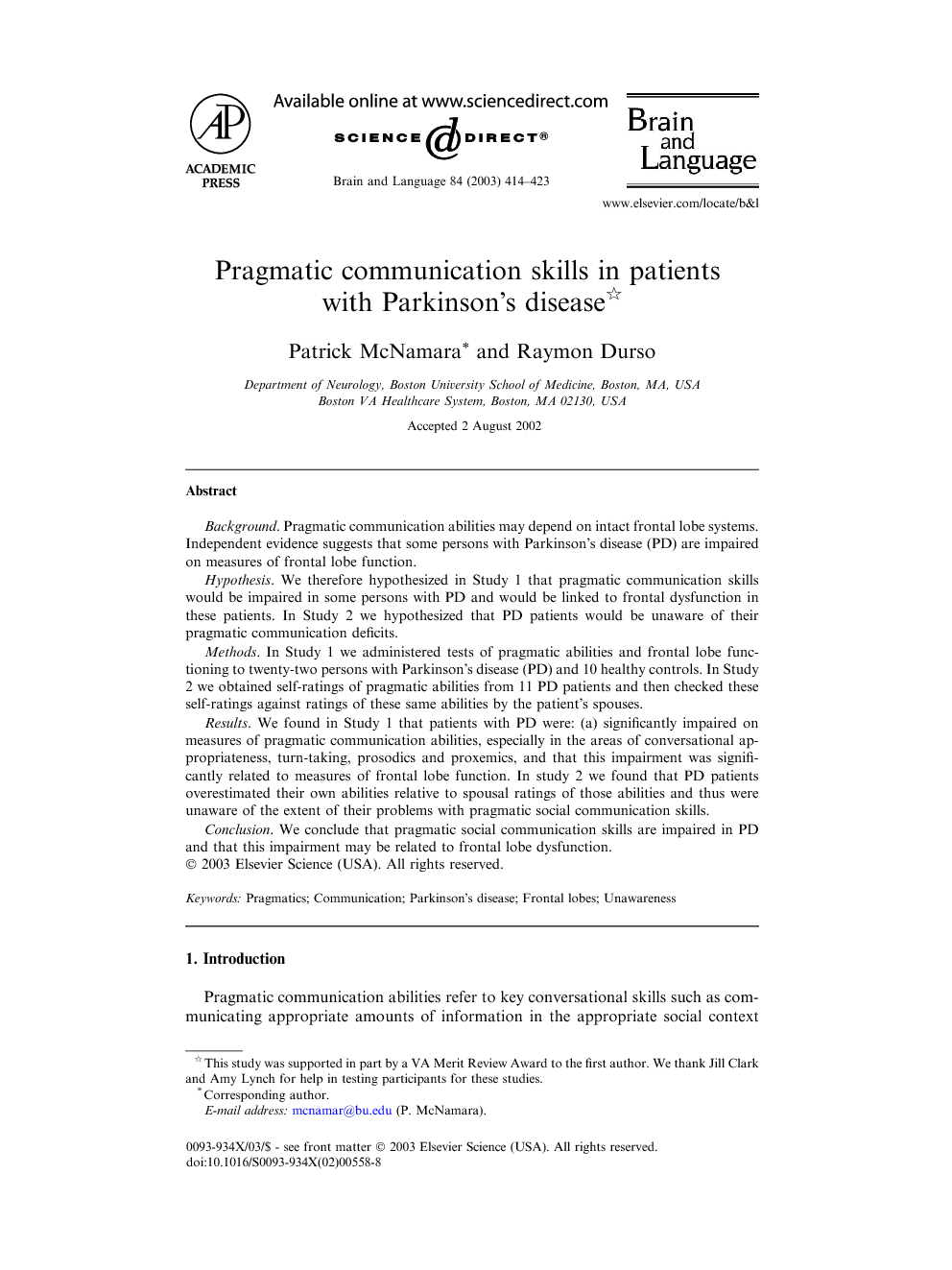 Pragmatic communication abilities refer to key conversational skills such as communicating appropriate amounts of information in the appropriate social context and at the appropriate time, knowing how to start, conduct and end conversations, making socially appropriate requests and commands and delivering thematically cohesive accounts or narratives of relevant events in one’s life (Gallagher & Prutting, 1983; Levinson, 1983; Prutting & Kirchner, 1983; Stemmer, 1999). Some forms of brain damage have been associated with loss of these key social communication skills with severe consequences for the individual concerned (Gallagher & Prutting, 1983; Penn, 1999; Ylvisaker & Szekeres, 1989). Loss of these pragmatic communication skills impairs the individual’s ability to effectively convey his desires and needs and to elicit help from others. They are essential skills to have if the brain-damaged individual is ever to integrate back into a job or personal social network. Even the simplest tasks of daily life are undermined if an individual cannot effectively convey needs, desires and information to another. To date, most studies of pragmatic communication abilities in persons with brain damage have focused on populations with traumatic brain injury (Ylvisaker & Szekeres, 1994), aphasics (Joanette & Ansaldo, 1999) or persons with right hemisphere brain damage due to stroke (Myers, 1994). It is our clinical impression that persons with Parkinson’s disease may also experience severe difficulties with social communication. Even before the disorder affects motor systems involving gesture and speech intelligibility, some persons with PD appear to experience inordinate difficulty in social conversation, turn-taking, staying on topic and appropriately conveying emotion. In addition to our own clinical impression of pragmatic difficulties in PD, there is neuropsychologic evidence which suggests that the neurocognitive systems thought to support pragmatic communication skills (right hemisphere and frontal lobes-see McDonald, 1993; Ylvisaker & Szekeres, 1989; Zaidel et al., 2000; for reviews) are impaired in PD. Since many patients with Parkinson’s disease (PD) are known to perform poorly on tests traditionally linked to frontal lobe functions (Gotham, Brown, & Marsden, 1988; Taylor & Saint-Cyr, 1995), they may also perform poorly on tests of pragmatic competence. Pragmatic communication deficits might help to account for the well-known impairment in social and affective interactions in patients with PD as the disease progresses (Hoehn & Yahr, 1967; Hubble & Koller, 1995; Lang & Lozano, 1998; McNamara et al., 1995). We could find only a single study of pragmatic communication skills in patients with PD but the patients described in that report were atypical. Kegl and Poizner (1998) described three patients with PD who could not hear or speak and thus used sign language to communicate. Given the severe motor deficits associated with PD, one would expect development of compensatory strategies to overcome the barriers to communication and that is what Kegl and Poizner found in the three signers they studied. The signers, for example, would physically reposition themselves relative to their interlocutors in order to enhance visual channels of communication. They used reiteration, repetition and other such devices to get their point across. They frequently shifted the burden of conversation onto their interlocutors. While Kegl and Poizner’s results concerning development of pragmatic compensatory strategies are interesting, they may not accurately describe the pragmatic skill base of most PD patients who do not rely on sign language for communication purposes. We could find no papers that systematically assess pragmatic communication skills in PD. In what follows, in study 1 we assessed pragmatic communication abilities in patients with PD and then examined the relation between these and measures of frontal lobe function. We hypothesized that (a) PD patients would evidence significant impairment in some domains of pragmatic communicative performance and that this impairment would be related to frontal lobe dysfunction.