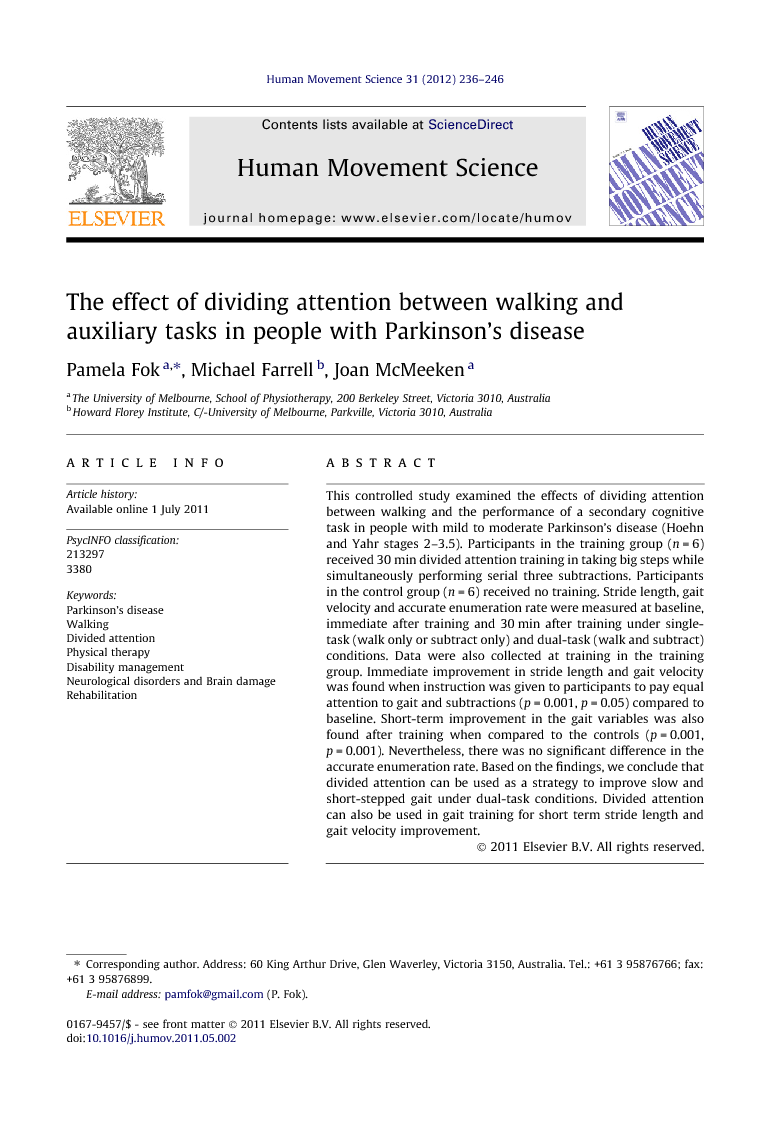 This controlled study examined the effects of dividing attention between walking and the performance of a secondary cognitive task in people with mild to moderate Parkinson’s disease (Hoehn and Yahr stages 2–3.5). Participants in the training group (n = 6) received 30 min divided attention training in taking big steps while simultaneously performing serial three subtractions. Participants in the control group (n = 6) received no training. Stride length, gait velocity and accurate enumeration rate were measured at baseline, immediate after training and 30 min after training under single-task (walk only or subtract only) and dual-task (walk and subtract) conditions. Data were also collected at training in the training group. Immediate improvement in stride length and gait velocity was found when instruction was given to participants to pay equal attention to gait and subtractions (p = 0.001, p = 0.05) compared to baseline. Short-term improvement in the gait variables was also found after training when compared to the controls (p = 0.001, p = 0.001). Nevertheless, there was no significant difference in the accurate enumeration rate. Based on the findings, we conclude that divided attention can be used as a strategy to improve slow and short-stepped gait under dual-task conditions. Divided attention can also be used in gait training for short term stride length and gait velocity improvement.

Parkinson’s disease (PD) adversely affects walking and increases the risk of falling. Short shuffling steps and slow walking speed are the typical walking deficits seen in people with PD and festinating and freezing can develop as the disease progresses (Iansek et al., 2006 and Morris et al., 2008). Difficulty with walking can be frustrating and inconvenient to the person with PD and their carers. Furthermore, small steps and decreased toe-floor clearance can lead to stumbling and falling (Vieregge, 1997), while festinating and freezing of gait are established risk factors for falls (Bloem, Hausdorff, Visser, & Giladi, 2004). The aberrant features of the Parkinsonian gait become even more pronounced when an alternative task provides distraction from walking (dual-task interference). People with PD have reported that they need to be vigilant and pay constant attention to their gait while performing daily activities (gait prioritization), in order to walk properly and safely (Jones et al., 2008). Three published studies have provided empirical evidence in support of using a gait prioritization strategy to manage slow and shuffling gait in people with PD under dual-task conditions (Baker et al., 2007, Canning, 2005 and Fok et al., 2010). In these studies, people with PD walked with longer strides and faster when they followed verbal instructions given by another person to prioritize attention to taking big steps while performing a secondary task. The secondary task involved either carrying a tray with glasses (Baker et al., 2007 and Canning, 2005) or serial three subtractions (Fok et al., 2010). The improvements in stride length and gait velocity were not significantly different from the values obtained under single-task conditions (walking only) at baseline (Canning, 2005), nor those from matched healthy controls under a dual-task condition at baseline (Baker et al., 2007). No significant adverse effect was noted on the performance of the secondary task in all three studies. Furthermore, our group (Fok et al., 2010) has reported positive, short-term carry-over effects from a 30-min session of repeated gait prioritization training. Significant improvements in stride length and gait velocity, as well as significant reductions in the severity of dual-task interference were detected immediately after training and 30 min after training. The benefits of prioritization for the performance of gait provide support for this strategy as a rehabilitation approach in people with PD. However, not all situations will permit a tight focus on walking, in which case walking as the principle priority would have limited ecological validity. It is possible that dividing attention between walking and ancillary tasks may be feasible for people with PD and provide a strategy with considerable utility for real world situations. While yet to be tested in people with PD, there is evidence for dividing attention between gait, balance and ancillary tasks in other groups. Older people with balance problems have successfully been trained to improve their performance during dual-task balance (Silsupadol et al., 2009), and people with acquired brain injuries have benefited from training in dual-task gait performance (Evans, Greenfield, Wilson, & Bateman, 2009). There would be important implications for the management of people with PD if training effects on divided attention seen in other groups can be replicated in PD patients. This study explored the immediate and short-term effectiveness of a divided attention strategy, using a controlled experimental design, in people with PD while they are combining a cognitive task with walking. We predicted that those who divided their attention equally between taking big steps and performing the cognitive task would be able to walk with longer strides, to walk faster and to perform the cognitive task better. We also predicted that the improvement would be retained in the short-term if divided attention was practised for 30 min.