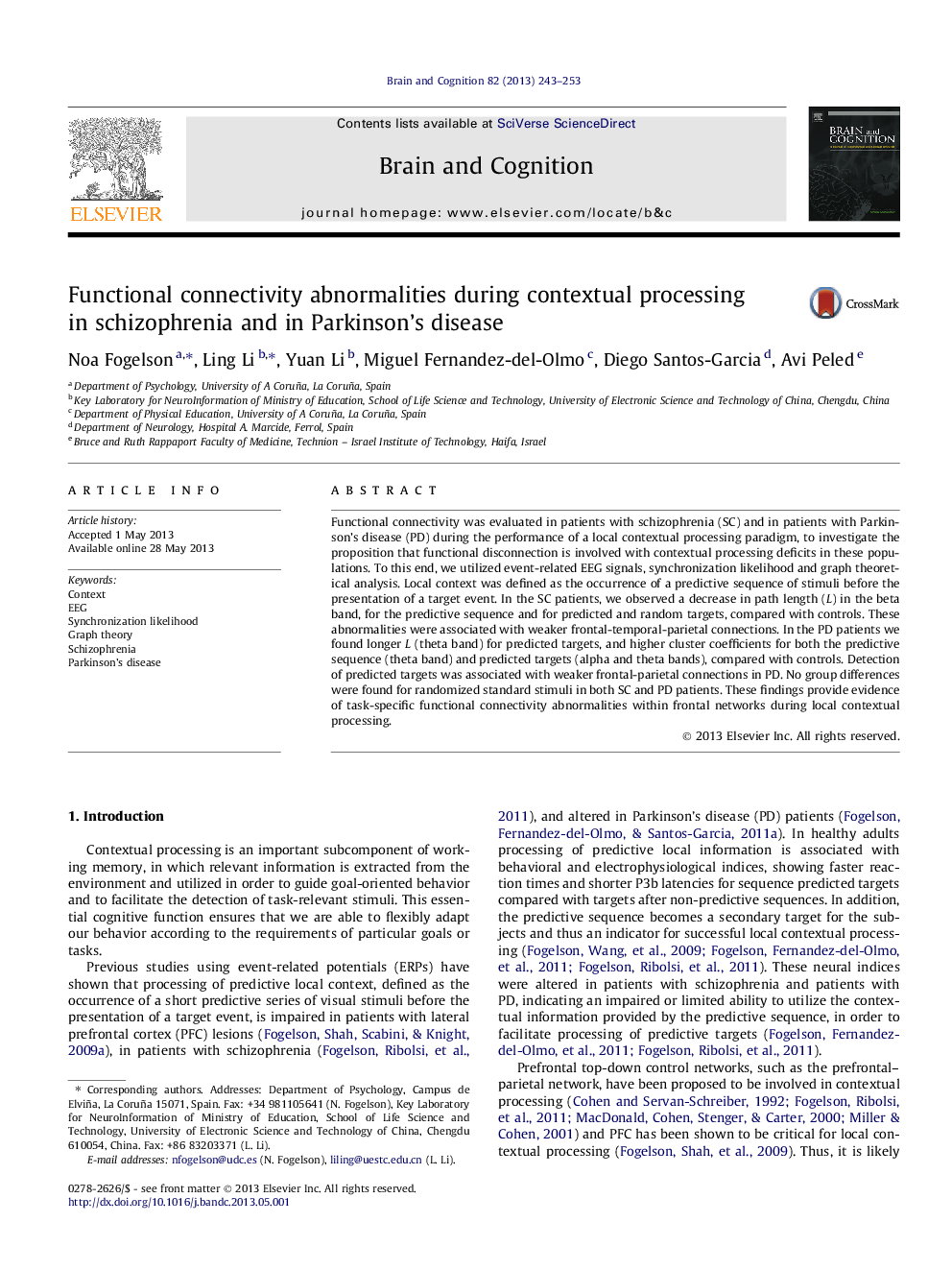 Functional connectivity was evaluated in patients with schizophrenia (SC) and in patients with Parkinson’s disease (PD) during the performance of a local contextual processing paradigm, to investigate the proposition that functional disconnection is involved with contextual processing deficits in these populations. To this end, we utilized event-related EEG signals, synchronization likelihood and graph theoretical analysis. Local context was defined as the occurrence of a predictive sequence of stimuli before the presentation of a target event. In the SC patients, we observed a decrease in path length (L) in the beta band, for the predictive sequence and for predicted and random targets, compared with controls. These abnormalities were associated with weaker frontal-temporal-parietal connections. In the PD patients we found longer L (theta band) for predicted targets, and higher cluster coefficients for both the predictive sequence (theta band) and predicted targets (alpha and theta bands), compared with controls. Detection of predicted targets was associated with weaker frontal-parietal connections in PD. No group differences were found for randomized standard stimuli in both SC and PD patients. These findings provide evidence of task-specific functional connectivity abnormalities within frontal networks during local contextual processing.

Contextual processing is an important subcomponent of working memory, in which relevant information is extracted from the environment and utilized in order to guide goal-oriented behavior and to facilitate the detection of task-relevant stimuli. This essential cognitive function ensures that we are able to flexibly adapt our behavior according to the requirements of particular goals or tasks. Previous studies using event-related potentials (ERPs) have shown that processing of predictive local context, defined as the occurrence of a short predictive series of visual stimuli before the presentation of a target event, is impaired in patients with lateral prefrontal cortex (PFC) lesions (Fogelson, Shah, Scabini, & Knight, 2009a), in patients with schizophrenia (Fogelson, Ribolsi, et al., 2011), and altered in Parkinson’s disease (PD) patients (Fogelson, Fernandez-del-Olmo, & Santos-Garcia, 2011a). In healthy adults processing of predictive local information is associated with behavioral and electrophysiological indices, showing faster reaction times and shorter P3b latencies for sequence predicted targets compared with targets after non-predictive sequences. In addition, the predictive sequence becomes a secondary target for the subjects and thus an indicator for successful local contextual processing (Fogelson, Wang, et al., 2009, Fogelson, Fernandez-del-Olmo, et al., 2011 and Fogelson, Ribolsi, et al., 2011). These neural indices were altered in patients with schizophrenia and patients with PD, indicating an impaired or limited ability to utilize the contextual information provided by the predictive sequence, in order to facilitate processing of predictive targets (Fogelson, Fernandez-del-Olmo, et al., 2011 and Fogelson, Ribolsi, et al., 2011). Prefrontal top-down control networks, such as the prefrontal–parietal network, have been proposed to be involved in contextual processing (Cohen and Servan-Schreiber, 1992, Fogelson, Ribolsi, et al., 2011, MacDonald et al., 2000 and Miller and Cohen, 2001) and PFC has been shown to be critical for local contextual processing (Fogelson, Shah, et al., 2009). Thus, it is likely that the deficits in processing local contextual information in schizophrenia and PD patients, demonstrated in recent studies (Fogelson, Fernandez-del-Olmo, et al., 2011 and Fogelson, Ribolsi, et al., 2011) are due to a “functional lesion” (Honey & Fletcher, 2006) of frontal networks. In the present study we specifically examine this proposition, by evaluating event-related functional connectivity in schizophrenia and PD patients during performance of a previously reported paradigm of local contextual processing (Fogelson, Shah, et al., 2009, Fogelson, Fernandez-del-Olmo, et al., 2011 and Fogelson, Ribolsi, et al., 2011). To this end, we utilized synchronization likelihood and graph theoretical analysis to evaluate EEG event-related functional connectivity in schizophrenia and PD patients performing the local contextual paradigm described above. Synchronization likelihood (SL) evaluates the dynamical interdependencies between at least two simultaneously recorded signals and determines the degree to which one dynamical system predicts the activity of another (Stam and van Dijk, 2002 and Rubinov et al., 2009). The advantage of this method is that it evaluates both linear and non-linear synchronization between signals, thus giving a more accurate representation of functional interactions (Micheloyannis et al., 2006, Rubinov et al., 2009 and Stam et al., 2007). Graph analysis utilizes a mathematical model in which a graph consists of a collection of nodes connected through a collection of edges (Bressler and Menon, 2010, Bullmore and Sporns, 2009, He and Evans, 2010, Stam and Reijneveld, 2007 and Stam and van Straaten, 2012). This model has been used to study the interactions within complex networks, such as human brain networks, by evaluating the correlations between recorded signals of brain activity from fMRI, MEG, or EEG (Bullmore and Sporns, 2009, He and Evans, 2010, Stam and Reijneveld, 2007, Stam and van Straaten, 2012 and Stam et al., 2007). The degree, clustering coefficient and path length are the most commonly used measures of graphs or networks. Networks consist of nodes and connections. Thus, the degree (K) evaluates the number of connections to each node, with larger K reflecting greater number of connections in a graph. The clustering coefficient (C) evaluates the number of connections between neighbors, thus providing a measure of the local structure of the network (local segregation) and its resilience to random attacks ( Bullmore and Sporns, 2009, Stam et al., 2007 and Watts and Strogatz, 1998). Path length (L) evaluates the number of steps from one node to another, and is thus an index of the network global properties and the overall integration of the network ( Bullmore and Sporns, 2009, Stam and van Straaten, 2012 and Stam et al., 2007). Structured networks are characterized by high clustering and long path length, while random networks are characterized by low clustering and short path length. In the middle are small-world networks that combine regularity and randomness in the same network, with high clustering and short path length ( Bullmore and Sporns, 2009, Stam and van Straaten, 2012, Stam et al., 2007 and Watts and Strogatz, 1998). Small-world networks are highly efficient in terms of information processing and are resistant to random attacks but are vulnerable to targeted attack (to a hub). Studies suggest that human brain networks have small-world network properties, and that these properties are altered in a variety of neurological and psychiatric disorders, such as Alzheimeŕs disease, epilepsy, schizophrenia, depression and autism ( Bullmore and Sporns, 2009, Liao et al., 2010, Rubinov et al., 2009, Stam et al., 2007, Leistedt et al., 2009 and Barttfeld et al., 2011). The objective of the current study is to examine functional connectivity in two different patient populations, in schizophrenia patients (Experiment 1) and PD patients (Experiment 2), both exhibiting local contextual processing deficits (Fogelson, Fernandez-del-Olmo, et al., 2011 and Fogelson, Ribolsi, et al., 2011). Our aim was to further explore the mechanisms underlying these deficits, by examining how functional connectivity changes as a function of context and across these two patient populations.