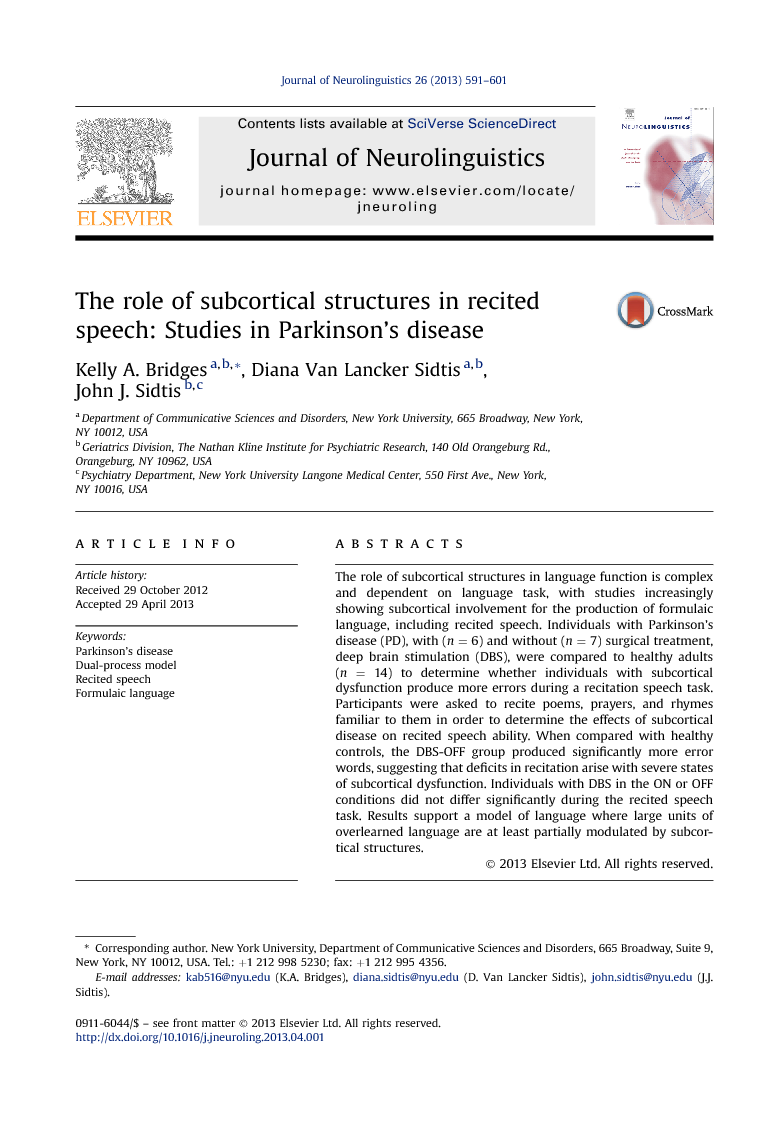 The role of subcortical structures in language function is complex and dependent on language task, with studies increasingly showing subcortical involvement for the production of formulaic language, including recited speech. Individuals with Parkinson's disease (PD), with (n = 6) and without (n = 7) surgical treatment, deep brain stimulation (DBS), were compared to healthy adults (n = 14) to determine whether individuals with subcortical dysfunction produce more errors during a recitation speech task. Participants were asked to recite poems, prayers, and rhymes familiar to them in order to determine the effects of subcortical disease on recited speech ability. When compared with healthy controls, the DBS-OFF group produced significantly more error words, suggesting that deficits in recitation arise with severe states of subcortical dysfunction. Individuals with DBS in the ON or OFF conditions did not differ significantly during the recited speech task. Results support a model of language where large units of overlearned language are at least partially modulated by subcortical structures.

Neural organization and allocation of speech and language function have long been attributed to cortical structures in the left cerebral hemisphere; however, current research provides additional support for subcortical and right-hemisphere involvement in specific aspects of verbal communication, including those reflecting pragmatic competence. John Hughlings Jackson (1874/1958) described two forms of speech, propositional and non-propositional, that are differentially affected by aphasia. The study of non-propositional or automatic speech was seemingly overshadowed throughout much of the 20th century by the generative grammar movement (Chomsky, 1957, 1965) and emphasis was placed on novel, newly created utterances (Van Lancker, 1975). However, cases were described by aphasiologists through the mid-to-late 20th century that showed selective preserved production of automatic speech (e.g., yes/no, counting, reciting the days of the week), fixed or formulaic expressions (e.g., yes, hello, well and you know, pause fillers including uh and um), and even longer units of overlearned language (e.g., songs, poems, rhymes, quotations) following damage to the left cortical regions from stroke or hemispherectomy (see Riese, 1949; as cited in Critchley, 1967; Critchley, 1970; Espir & Rose, 1970; Smith, 1966; Smith & Burklund, 1967; Zangwill, 1967). The selective preservation of these overlearned structures, formulaic as well as recited language, following damage to the left-cerebral hemisphere suggests the role of the right-hemisphere and, likely, subcortical regions in the production of at least some forms of language ( Code, 1982; Espir & Rose, 1970; Van Lancker Sidtis, 2004, 2006, 2012; Wray & Perkins, 2000; Zangwill, 1967). This evidence of preserved overlearned language units following left-hemisphere damage suggests a dual-process model of language production, whereby formulaic language production is modulated by a subcortical-right hemisphere circuit and novel language is modulated by the left-hemisphere ( Sidtis, Canterucci, & Katsnelson, 2009; Van Lancker Sidtis, 2004; Wray & Perkins, 2000). Based in current theories, this work is motivated by a desire to discover whether longer units of overlearned linguistic material, namely recited speech, also fall under the purview of subcortical structures, thereby providing further evidence for the dual process model of language production. The involvement of subcortical structures in language production can be examined through the study of individuals with selective neural damage to or preservation of functional areas of the brain (e.g., cortical and subcortical stroke, Alzheimer's disease, Parkinson's disease). Recitation speech is thought to be modulated by subcortical structures, such as the basal ganglia, and can be examined by studying patients with Parkinson's disease, who have subcortical dysfunction. By examining performance in individuals with Parkinson's disease, more can be learned about the nature of the neural control of this type of routinized language task.