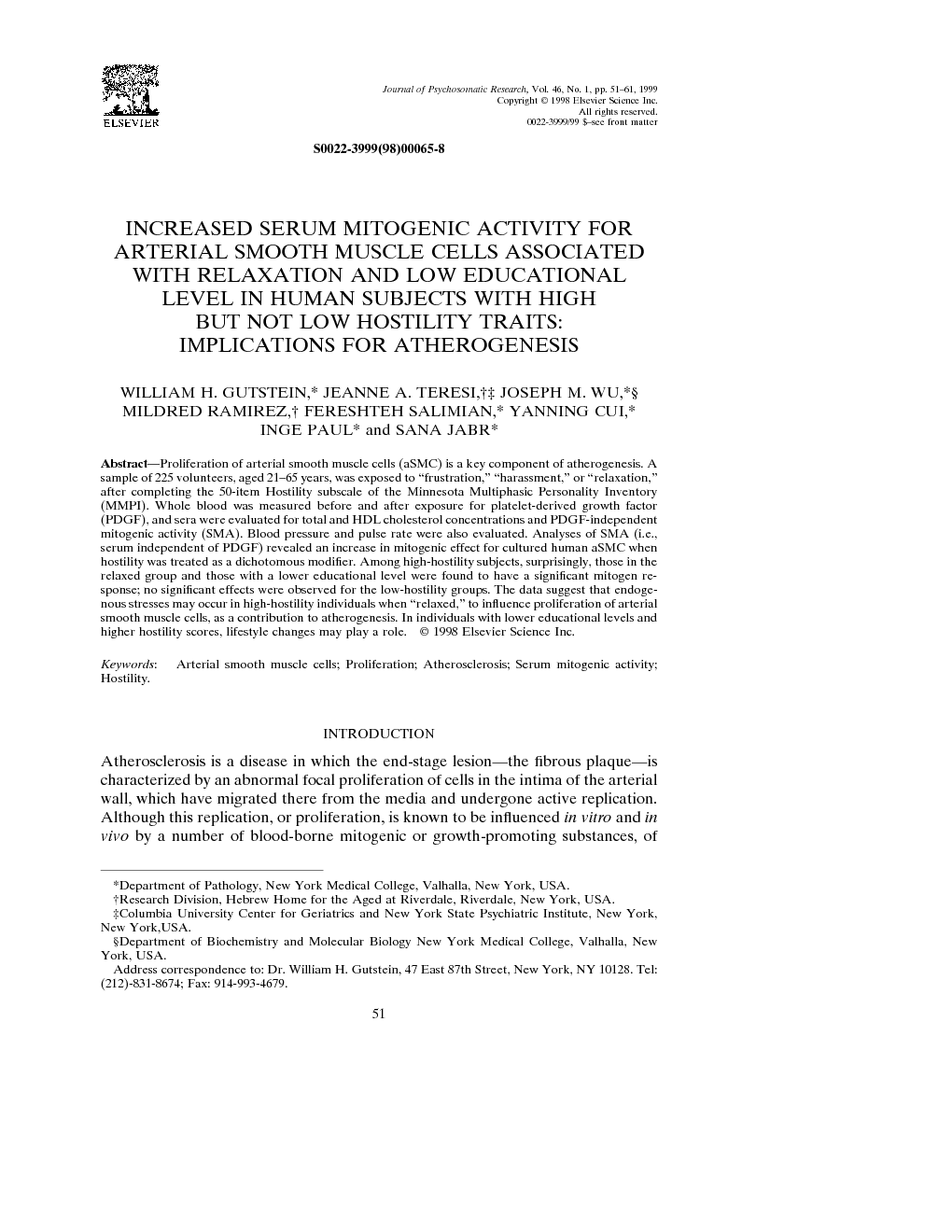 Proliferation of arterial smooth muscle cells (aSMC) is a key component of atherogenesis. A sample of 225 volunteers, aged 21–65 years, was exposed to “frustration,” “harassment,” or “relaxation,” after completing the 50-item Hostility subscale of the Minnesota Multiphasic Personality Inventory (MMPI). Whole blood was measured before and after exposure for platelet-derived growth factor (PDGF), and sera were evaluated for total and HDL cholesterol concentrations and PDGF-independent mitogenic activity (SMA). Blood pressure and pulse rate were also evaluated. Analyses of SMA (i.e., serum independent of PDGF) revealed an increase in mitogenic effect for cultured human aSMC when hostility was treated as a dichotomous modifier. Among high-hostility subjects, surprisingly, those in the relaxed group and those with a lower educational level were found to have a significant mitogen response; no significant effects were observed for the low-hostility groups. The data suggest that endogenous stresses may occur in high-hostility individuals when “relaxed,” to influence proliferation of arterial smooth muscle cells, as a contribution to atherogenesis. In individuals with lower educational levels and higher hostility scores, lifestyle changes may play a role.

Atherosclerosis is a disease in which the end-stage lesion—the fibrous plaque—is characterized by an abnormal focal proliferation of cells in the intima of the arterial wall, which have migrated there from the media and undergone active replication. Although this replication, or proliferation, is known to be influenced in vitro and in vivo by a number of blood-borne mitogenic or growth-promoting substances, of which PDGF is the most potent [1], in humans, the stimulus for this phenomenon is unknown. In recent years, studies have shown that various psychological factors may play an important, independent role in the development of this pathology (for review see ref. 2). More recent evidence suggests that anger and “hostility” (Ho) are some of the important factors not only in the coronary circulation 3 and 4, but in connection with cerebrovascular disease 5 and 6 and peripheral arterial disease as well [7]. A recent meta-analytic review indicates that, in the case of coronary heart disease (CHD), although the contribution may not be large, it is still significant from a public health policy point of view [8]. However, the means by which these characteristics translate into pathology at the level of the arterial wall are not understood. In both animals 9, 10 and 11 and humans 12, 13, 14 and 15, electrical stimulation of the diencephalon (hypothalamus) and structures closely connected with it, such as the limbic system and tegmentum of the midbrain, may elicit “aggression” and aggressive feelings—forms of behavior closely linked to the underlying trait of hostility in humans. Electrical stimulation of the diencephalon also produces lesions in arteries (aorta) of rodents [16] and nonhuman primates [17] that bear the essential characteristics of atherosclerotic plaques; that is, proliferation of arterial smooth muscle cells, collagen and elastin synthesis, and, in squirrel monkeys, lipid deposition, even when diets are not high in fat content. When rats experiencing hypothalamic stimulation were investigated in an in vitro system for a substance in their sera with growth-promoting properties for cells of the arterial wall that participate in the formation of atherosclerotic plaque (i.e., arterial smooth muscle cells), such a substance(s) was often present. The details of these investigations and their possible implications are discussed in several articles 18, 19 and 20. This finding suggested a possible link between aggressive behavior—emanating from the subcortical regions of the brain—and a cellular response in arteries contributing to atherogenesis via a serum factor that was mitogenic for these cells, although the mechanisms involved have not yet been elucidated. Reasoning, however, that a similar relationship might exist in human populations, the present study was undertaken among 225 normal subjects.